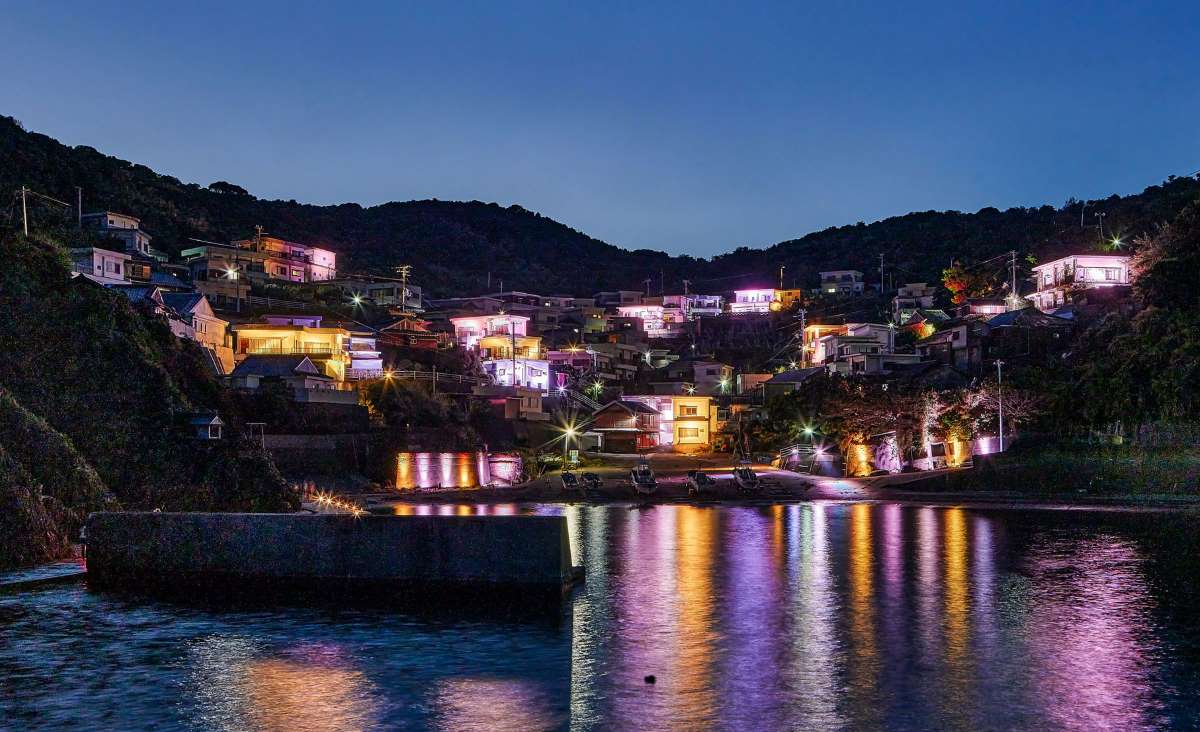 Arida City is a small port town in Wakayama Prefecture known for unshiu satsuma oranges. The port town of Yabitsu, located at the mouth of the Arida River, prides itself on its picturesque landscape with houses clustered together on mountain slopes facing the sea.

However, in recent years the exodus of residents from the area has left many houses vacant. The affliction is called akiya in Japanese.

To fight this trend, the local government has adopted a unique strategy by enlisting Takasho Digitec, a private outdoor lighting company.

They collaborated on a project called "Illuminated Yabitsu" from August 25 to 27 to attract new residents and shine a light on the city's declining population. The town was enveloped in an enchanting glow as vibrant lights flooded the houses.

Yabitsu is often called "Arida's hidden gem" according to the local government, for its quaint houses that line the mountain slopes. But the gem is so well-hidden that cars can't get through to it because of the narrow roads.

"The path leading from the village entrance on high ground to the coast is very steep. These daily inconveniences have kept newcomers away, and our community is aging," explained the city official.

In 2020, the district's residents comprised 60 households (135 people), less than half that of 2000, with 129 households (319 people). The percentage of people aged 65 and above is currently around 50%, and 60 of the 150 buildings in the district, including accommodation facilities, are said to be vacant.

Shining a Light on the Problem

The illumination project was pitched by Ryosuke Furusawa, president of Takasho Digitech, who was enchanted by the town's beauty.

"I didn’t know such a beautiful place existed."

Furusawa thought he could promote the city by illuminating the signature white walls of the houses, and proposed this idea to the municipal government.

The company decided to extend its focus from artistic beauty to delivering a stronger message on the growing number of akiya due to depopulation.

The town was illuminated by seventy RGB lights, which combined red, green, and blue to produce countless hues. Vacant houses were lit up with shades of blue and purple to highlight the town's shrinking population. The vibrant landscape was filmed and posted on YouTube and Instagram.

"We hope that many people will take notice of the project and want to live here," a city official said.

The Other "Amalfi" of Japan

Hideki Shuto moved to Yabitsu from Ichikawa, Chiba Prefecture in May 2021, where he opened Makena, a cafe that enjoys a stunning view of the bay.

"Yabitsu is a little-known spot for sightseeing and very Instagrammable," said Shuto. "It's also an ideal place to work remotely during the pandemic. I hope that more people will move here and invigorate the area."

Motoyasu Furukawa, 80, who manages a government-run hotel called Kuroshio is concerned about the village's declining population.

"Getting people interested in Yabitsu through the illumination project could be the first step to revitalizing this region," he says.

The city is considering more events like this in the future.

Similar efforts are underway in Saikazaki, Wakayama Prefecture. This area is also called "Japan's Amalfi" for its cluster of houses on the mountain slopes.

The town is working to attract new residents through creative projects such as converting old Japanese-style houses (kominka) into public spaces with designs inspired by Italian cafes.

An Arida city official hopes that the two "Amalfis" will create a synergistic effect.

"If you're looking for a new home, come visit both 'Amalfis' of Kishu Province (Wakayama Prefecture)."