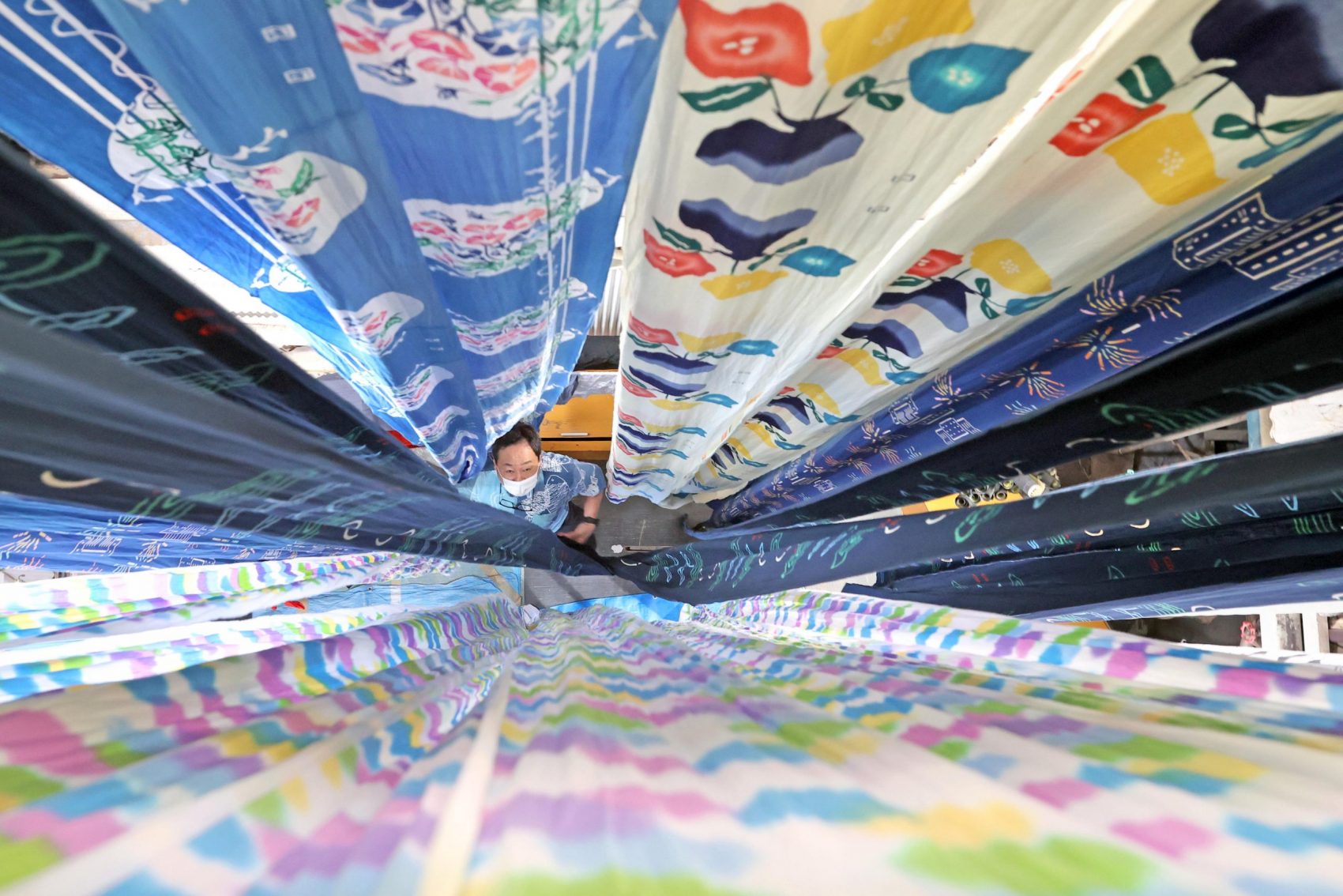 Pictures taken by Kotaro Hikono at Nakani, Sakai City, Naka Ward, on May 19.

For those who have ever visited Japan in the summer, especially between June and August, the humid heat that takes over in many areas is a well-known feature. This is especially true in large cities like Osaka, Kyoto and Tokyo.

And in those days, Japanese people have a best friend: tenugui. Often just a simple long rectangular piece of cotton cloth with unsewn ends, it’s used as the lifesaver companion to wipe sweat off your brow during those days when humidity is over 80 percent.

The towel has developed into a recognizable accessory at traditional summer festivals. Japanese participants tie it around their forehead, showing off the design or local emblem. In fact, manufacturers have created countless designs unique for the season, location and personality of the craftsman.

There is one shop in Osaka, called Nakani, that is now reaching peak season for its production of special Tenugui.

Nakani is located in Sakai City, Naka Ward. This shop uses the dyeing technique called chusen. Designs of Japanese morning glory flowers, spiral mosquito coils, and much more, decorate the 7-meter long cotton fabrics that are hanging in the shop to dry.

Chusen is a particular dyeing technique where about 25 meters of fabric are piled in an accordion shape, and then the cloth is dyed by hand. It’s a method thought to have been invented in Osaka in the Meiji Period (1868-1912). Nakani is known for the particular patterns and designs that were created over the years by its artisans.

This year, due to the continued impact of COVID-19 and the reduced number of festivals and celebrations around the country, Nakani has seen a drop in the demand for tenugui.

However, even this establishment has come up with creative ways around the downturn. Shop owner Yuji Nakao (63) told the Sankei Shimbun: “Instead of the usual length [tenugui] which is 90 centimeters long, we have made one which is more versatile at 60 centimeters. It can be wrapped around the neck, and it would be great if more people were to use it.”

Maybe you’ll want to give it a try this summer!