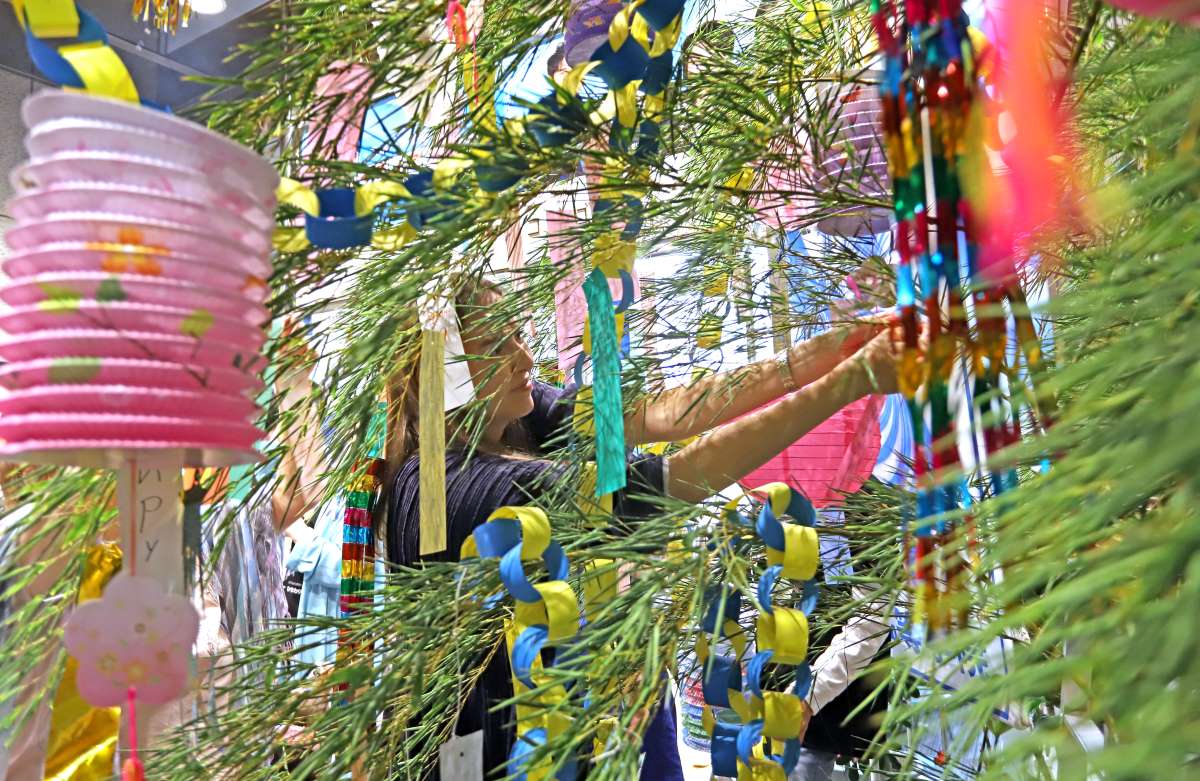 A Ukrainian woman writes down her wish in Ukrainian on a thin strip of paper and ties it to a bamboo branch at the Ukraine Exchange Center in Shibuya, Tokyo on July 7 (photo by Kenji Suzuki.)

On July 7, the Japanese Organization of Mental Health and Educational Agencies (MHEA) held a party to pray for peace and dine together at the Ukraine Exchange Center in Shibuya, Tokyo.

The event was part of an effort to give emotional support for the well-being of Ukrainians who fled to Japan after Russia invaded their country. It took place on Tanabata, which is the seventh day of the seventh month each year, and celebrates the meeting of two stars – Orihime and Hikoboshi – who are normally separated by the Milky Way.

About 30 Ukrainians, including some already residents in Japan, participated, scribbling their wishes for peace in Ukrainian language on thin strips of paper, which they tied to bamboo branches decorated with blue and yellow ribbons.

At the dinner party, which was inspired by the theme of the Japanese summer festival, the Ukrainians enjoyed typical festival fare like thin somen noodles, seafood sauteed with butter, and for dessert, shaved ice topped with syrup. They had time to reflect about their homeland at war while watching the sparkler fireworks, and praying to the stars in the sky.

Stanislav, who is 30, came to Japan from Donetsk Oblast in the eastern Donbas region a month ago. He talked about the situation there.

“Donetsk is in a dire situation due to the invasion by pro-Russian factions. I’m worried about my mother who is left there, but I can’t go home now,” he said.

Back home, he was in the hotel management business. “I want to learn a lot in Japan now. I thank everyone around me for their kindness and help.”  He smiled, adding, ” I love Japanese food.”

Apitonova Lolita is also 30. She evacuated from Southeastern Dnipro in central Ukraine and came to Japan at the end of April, after escaping to Poland with her mother Tetiana and daughter Erica (4). She currently lives in Tokyo.

“I love Tokyo,” she said.” Everyone is kind and I can live with peace of mind. But I left my heart in Ukraine. It can be hard when you are not quite adjusted,” she said with tears in her eyes.