[HISTORY WARS] Is The Confucius Institute Cultural Cover for Spying? 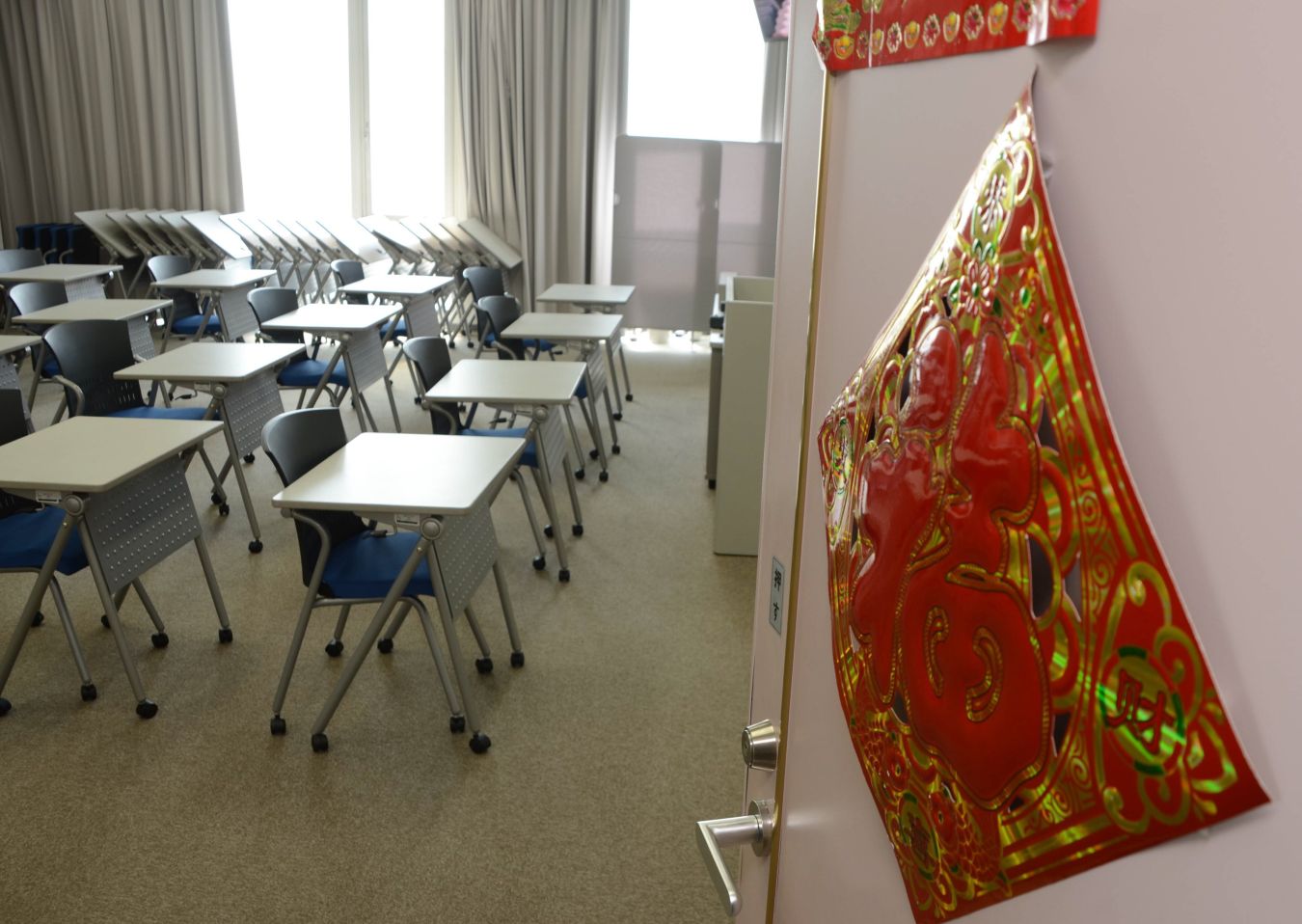 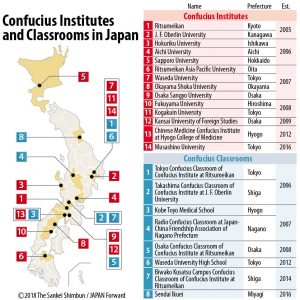 The Kyoto Museum for World Peace is a big, white building standing in a quiet area just 10 minutes away from the World Heritage Site, Kinkaku-ji Temple. The museum’s exhibitions are based on themes of war and peace. A signboard, “The Ritsumeikan University Confucius Institute,” can be found on the second floor.

Traditional Chinese decorations, such as red lanterns, adorn the interior, and a photo on the wall shows the former premier of the People’s Republic of China, Wen Jiabao, visiting Ritsumeikan University in 2007.

There is also a stack of the overseas edition of the People’s Daily, the official newspaper of the Chinese Communist Party, along with the words, “Take for free.”

The Confucius Institute was started by the Chinese government in 2004. It is structured as a non-profit public educational organization with the stated objective of promoting Chinese language and culture internationally. It has established branches in various educational institutions in several countries overseas.

During the Cultural Revolution in the early 1970s, the “Criticize Lin, Criticize Confucius” campaign delivered a severe blow to Confucianism, a school of philosophy that was founded by Confucius (551-479 B.C.). Now, however, the name “Confucius Institute” has come back as a clear sign that Confucianism is being used as a worldwide symbol of Chinese culture.

In Japan, establishment of a local branch of the Confucius Institute requires only that a Japanese university sign an agreement with the Office of Chinese Language Council International (Hanban), a Chinese government entity affiliated with the Chinese Ministry of Education.

The local Confucius Institute is then managed jointly by the Japanese university and the partnering Chinese university. The curriculum and resources are provided by the Confucius Institute’s headquarters, while the funding for the local institute office is said to be split equally between the Chinese government and the Japanese educational institution.

Chinese teachers are dispatched by Chinese universities under the program and the teachers’ salary is provided by the Hanban. There is also a scholarship system to support overseas students who want to study abroad at a Chinese university.

The Ritsumeikan Confucius Institute was the first to be established in Japan. It opened in October 2005 under the joint administration of Ritsumeikan and Beijing University. Approximately 300 students attend the institute to learn Chinese, among other subjects, and it is said to foster regional cooperation, international understanding, and cultural exchange.

Yo Unoki, president of the Ritsumeikan Confucius Institute, says, “Some people view the Confucius Institute as a branch of a Chinese government institution, but we have an inseparable relationship with China and this requires a deeper mutual understanding of each other.”

Nevertheless, the Confucius Institute has been barraged with accusations internationally that it is being used for the purposes of Chinese communist propaganda and government spy activities. FBI Director Christopher Wray, testifying on the issue at a hearing before the United States Senate Intelligence Committee in mid-February, admitted the FBI was “watching warily” and investigating some Confucius Institutes.

In 2010, the then-board director of Osaka Sangyo University accused the Confucius Institute of being a Chinese “cultural spy agency” during collective bargaining with the institute. The allegation was treated a scandal, forcing him to leave his post.

In an interview by The Sankei Shimbun, the former director said, “It became a scandal when, during an informal discussion about the institution, I mentioned what was being said about the Confucius Institute on the internet and by other sources.” He sued the university because he was made to leave his position and the university, and the trial ended in an out-of-court settlement. The former director says, “Now, things are happening exactly as I said.”

When asked about the reasons for the former director’s dismissal, Osaka Sangyo University declined to give any details, only stating that they thought there may also have been other reasons.

When the institute’s staff are asked about the activities of the Confucius Institute in Japan, their responses are unanimously aligned, explaining that the institute is “just a culture school that focuses on providing Chinese language classes to students and local residents.”

In addition to Chinese language classes, the institute offers calligraphy, tai chi, and cooking classes for making Chinese home-cooked dishes, such as dumplings and zongzi.

The staff also point out that an impressive number of events were held in 2017 in celebration of the Chinese Spring Festival, including the “special acupuncture course” (Confucius Classroom at Kobe Toyo Medical School), the “Japan-China Kids Corner” (Fukuyama University Confucius Institute), and the “Japan Youth Chinese Karaoke Contest” (held by the J. F. Oberlin University Confucius Institute at the Shanghai International Studies University).

At the October 2017 Japan Confucius Institute Council meeting, Hu Zhiping, the minister-counselor of the education section of the Chinese embassy in Japan, spoke about how the embassy supports further development of the Confucius Institute. The institute was referred to as an example of embracing the spirit of the Treaty of Peace and Friendship between Japan and the People’s Republic of China, which celebrates its 40th anniversary this year.

However, if the Confucius Institute only aims to be a culture school, the agreements requiring cooperative management with Chinese entities seem unnecessarily intrusive and largescale.

Kazushige Ura, the principal of the Okayama Shoka University Confucius Institute, explains this concern: “The Dalian University of Foreign Languages (Okayama’s partner university) sends excellent students to us. The institute is indispensable for maintaining this relationship.”

Currently, Japan is facing what is called the “2018 problem” — a decline of university students caused by the lack of 18-year-olds in the population. As a result, the students and funds sent from China are welcomed by Japanese universities. One staff member of a university affiliated with the Confucius Institute admits that “the biggest advantage is that we can have more Chinese students.”

Although the official goal of the Confucius Institute is to spread Chinese culture and deepen mutual understanding, it is not China’s only initiative. In Japan, Chinese vessels and aircraft have repeatedly trespassed into the contiguous zone around Senkaku Islands in Ishigaki, Okinawa, and Japan’s Air Defense Identification Zones, as China unilaterally expands its territorial claims.

Ritsumeikan Confucius Institute president Yo Unoki responds to the tensions and suspicions about the institute by emphasizing, “We need to get past these stereotypes and deepen our understanding of Chinese people as they are, so that we may understand each other more…. I believe the Confucius Institutes can play a role.”

Government Agencies ‘Looking the Other Way’?

Mio Sugita, a member of the Liberal Democratic Party and the House of Representatives, asked how many Confucius Institutes there were in Japan during a subcommittee meeting of the budget committee of the National Diet on February 26. Hiroshi Yoshimoto, director-general of Japan’s Ministry of Education Higher Education Bureau, responded:

Sugita threw him a bitter pill, pointing out critically, “Your response depends entirely on those websites. However, according to the prior explanation given by the Ministry of Defense, there isn’t a single department that has a handle on the facts. The government is being dangerously defenseless. I want to see the Ministry of Education firmly deal with this issue.”

The Confucius — including Confucius Classrooms — started in 2004. As of the end of 2017, there were roughly 1,600 locations worldwide in 138 countries. The largest number by far are 735 in the Americas, of which 611 are in the United States. This is followed by 480 locations in Europe, 219 in Asia, and 120 Confucius Institute sites in Oceania.

The speedy spread of the institute is facilitated by the “inter-university cooperation” method of agreements adopted by Chinese authorities. The scheme allows new locations to be established at the institute’s discretion, without the cumbersome process of inter-governmental agreements.

Another activity of the institute is the training of Chinese language teachers who can teach foreigners. The institute even offers scholarships on the condition that the Chinese student will work as a language teacher abroad for at least three years after graduating from university. Such favorable conditions have attracted young people from various regions of China, producing 10,000 teachers in five years.

The Confucius Institute continues to expand its reach as it works hand-in-hand with China’s rising economic power to exert China’s influence. On the other hand, there is growing apprehension in Europe and the U.S.

“Many countries have concerns, but no effective measures have been taken against the Confucius Institute,” admits one public security official.