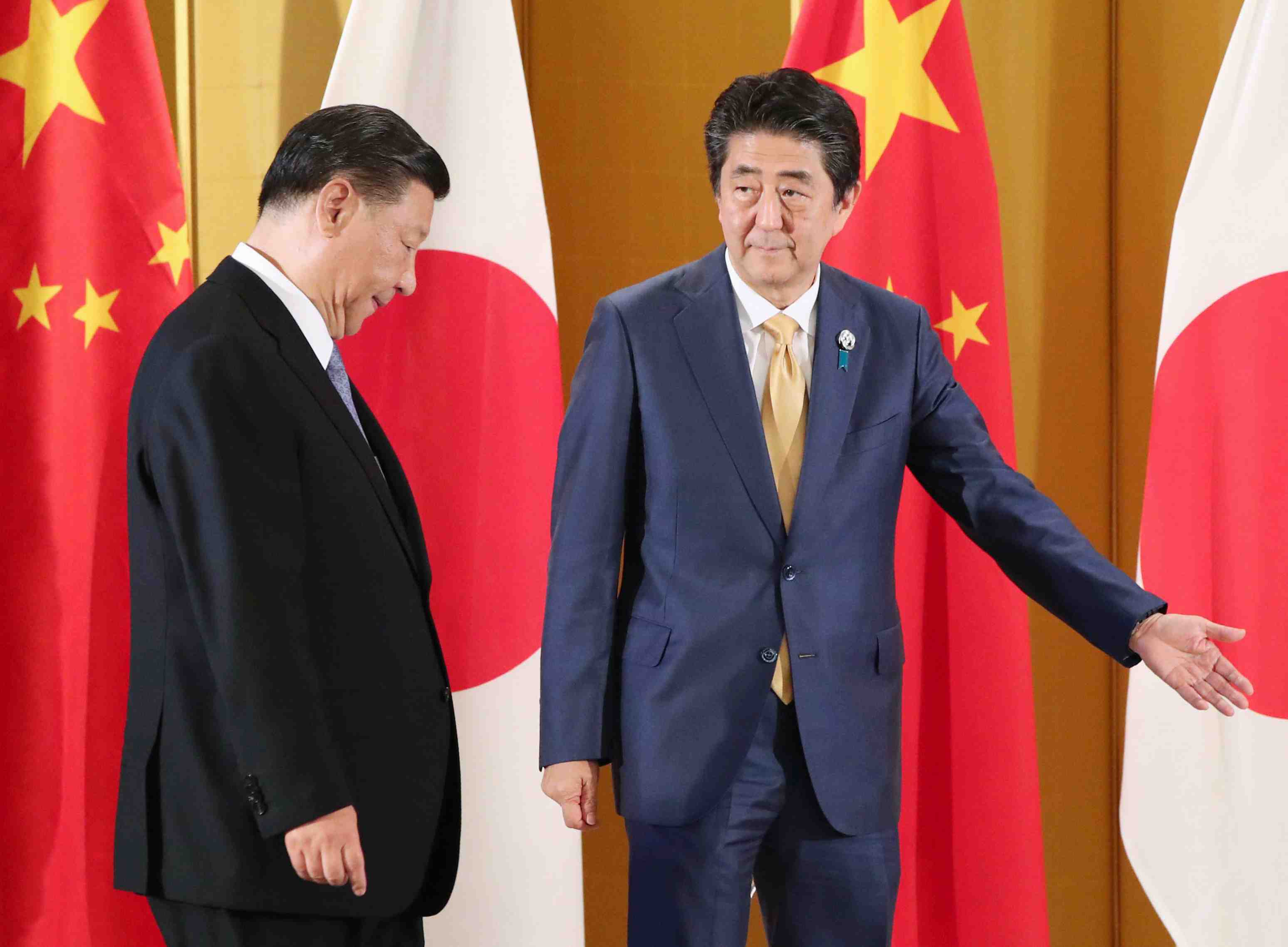 I don’t remember when I first read the news about former Japanese Prime Minister Shinzo Abe’s assassination. It was probably before I went to bed at midnight on July 7, Eastern Daylight Time in the United States, just minutes after Abe had been shot. Three hours later, at about 3:00 AM, I woke up without any reason, three hours earlier than usual.

As I couldn’t go back to sleep, I picked up my phone, and with half-opened and half-closed eyes, I saw a video sent to me via private message on Twitter. In this video, Wang Wenbin, the spokesperson for the Chinese Communist Party’s foreign ministry, threatened that Abe would meet a dead end and run into a bloodbath with a broken head (頭破血流) because he dared to “talk nonsense” on the Taiwan issue and “challenge the bottom line of Chinese people.”

This stern threat immediately woke me up completely. With wide open eyes, I got up and translated the video into English and posted it about one hour later.

From then on, posts about the brainwashed “little pinks” of the Chinese Communist Party (CCP) celebrating Abe’s assassination flooded the internet. And, from 5:00 AM to 11: 00 PM, I translated and tweeted over 10 of the most shocking and disgusting examples of those celebrations.

What Were They Celebrating?

For example, the comments under the state-controlled China Central Television (CCTV) news about Abe’s assassination read, “I hope he is dead,” “Has he died yet?” and “I must eat something good today.”

Other comments under a Beijing News report read, “The shooter is a hero, an absolute hero,” “[The shooter] missed the head. His marksmanship needs to improve,” “Three shots are too few, should have shot him into a sieve,” and “Thumbs up!”

Fairly soon, perhaps only hours after Abe’s death, photos of banners hung outside Chinese shops offering discounts to celebrate Abe’s assassination were everywhere on the internet.

For example, a banner at a milk tea shop read, “To celebrate Abe’s death, we will offer Buy One Get One Free for our milk tea for three days. The entire world is rejoicing.”

A sign at a bicycle shop said, “To celebrate Abe’s murder, we will give away free riding gloves today when you buy a bike.”

This sign says, “Celebrating Abe’s return to the West (meaning “death”). The whole world is rejoicing. Buy one, get one free store-wide!”

This sign at a lottery shop says, “Today Only/We are so happy today/Former Japanese Prime Minister Shinzo Abe was shot and killed. To celebrate, anyone who enters the store today and buys a lottery ticket for 100 yuan or more will get 8.80 yuan back per 100 yuan.”

This banner says, “Missing Abe who had gone far away. We are going to have a three-day weekend binge, 40% off the entire store!”

Some people even gathered to have a big banquet to celebrate. The banner at this banquet says, “Warmly celebrate the honorable shooting of Japanese devil Shinzo Abe.”

Other people gathered in a bar to have a big celebration. They put up a big picture of Abe on the stage and a couplet beside his picture, which says, “普天同庆 (The whole world rejoices) 欢天喜地 (Both heaven and earth celebrate, or happy heaven, joyful earth).”

Even the official account of China Central Television (CCTV), the Chinese Communist Party’s most important mouthpiece, and the Henan Communist Youth League joined the party.

The CCTV News account commented on the news of Abe’s death, “I am not talented, but I’ve learned suona for a few days.”

The suona is a traditional Chinese musical instrument mostly used during celebratory occasions. So, “I’ve learned suona for a few days,” is a subtle way to say, “I want to celebrate.”

The Henan Communist Youth League account posted a video of a shotgun similar to the one that was used to shoot Abe, and commented, “It works very well.”

On the day of Abe’s assassination, armed police in Hunan Province even made a video to showcase the power of the shotgun. After the introduction of the 09 type shotgun, which leaves almost zero chance of survival, the happy face of a young armed policeman shows up, and proudly announces the nickname of this shotgun as the “All Beings Are Equal Shotgun (衆生平等槍).”

Among all the different forms of celebrations, there was also a “bizarre” WeChat screenshot, in which a Chinese user “重装小兔19C_” (which can be roughly translated as “Heavily Equipped Little Rabbit 19C_”) posted the following at 18:07 on July 7, about 17 hours ahead of Abe’s assassination: “[I] have successfully got close to current and former PM of Japan. I will complete the task(s) given to me by the organization.”

Under this post were two photos of public activities (spaces), which were very similar to the one in which Abe was shot. One of the photos was about Abe and his public event.

After I posted this screenshot, a Twitter follower soon found that there is a Twitter account also called “重装小兔19C_” following Abe and quite a few other major Japanese accounts.

This screenshot was widely circulated on Chinese social media platforms after Abe’s death. People were shocked by the “coincidence” of the claims in the posts, and naturally questioned: Are there any connections between the “task(s)” and Abe’s death? And if not, what were the “task(s)” mentioned in the post? Do the posters plan to do something to the current prime minister of Japan too?

The claim about “completing” the CCP’s “task(s)” could also be a joke. In that case, these exchanges shouldn’t be taken too seriously. But, then again, the question is, who would want to make such a joke 17 hours before Abe’s assassination unless he/she knew something was about to happen?

While the world was shocked by all these celebrations in China, some Chinese people were very upset about my translating and posting these little pinks’ extreme statements online. They argued that not all Chinese people are like that.

The problem is, they argued, all posts that show support, sympathy, or condolences have been deleted.

To this I replied, yes, that is exactly what the problem is. If those celebration posts were allowed by the CCP, then that would represent the CCP’s official attitude on this matter.

However, among the overwhelmingly one-sided celebration, a 10-year-old Chinese pop song called “Unfortunately It Is Not You (可惜不是你)” suddenly became so popular in China that the authorities, later on, had to pull it off the shelf from some sites.

Although nobody ever tries to explain what “unfortunately it is not you” means, clear-headed Chinese netizens all knew those who were sharing the song wished that “you” would be. Those people are hoping that the one who was shot was not Abe, but “somebody else,” as an online poll shows.

After the song “Unfortunately It Is Not You” was blocked, netizens persisted. They found other replacements to continue to promote online, including “The Next One Will Be You (下一个就是你),” “Why It Was Not You (为什么不是你)?”, “I Hope It Was You (希望是你),” and  “It Is Okay As Long As At the End, It Is You (最后是你就好).”

All of those are nonpolitical love songs or movies, but in the heavily-censored online environment in China, that is the only way for netizens to show their disagreement with the CCP.

One might wonder: Doesn’t the CCP know what kind of impression these celebrations will leave on the outside world?

I am fairly certain that the CCP does know. However, “hating Japan” has been a long-term indoctrination in China that has strategic importance to the CCP.

As early as several decades ago, the CCP realized that there was no way that the CCP would be able to solve the political, financial, and social crises in China. So, the only way out was to declare war against Taiwan.

And if the CCP were to declare war against Taiwan, then the United States and Japan would certainly side with Taiwan and thus become the CCP’s war enemies too.

Therefore, anti-Japan, anti-America, and anti-Taiwan sentimentality must be incited and maintained in China so that the CCP can easily manipulate public opinions.

Also, by pushing Chinese people far away from the universal values of the civilized world, the CCP can own and control these people more thoroughly.

However, what the CCP has not realized is that, while the CCP has adducted China and the Chinese people, those brainwashed little pinks have in turn adducted the CCP as well.

The anti-humanity, anti-human civilization nature of the Chinese Communist Party, displayed in the celebration frenzy after Abe’s assassination, let the Japanese public, as well as everyone in the civilized world, see more clearly what the CCP really is.

First of all, Abe’s party swept to victory in an upper house election that happened only two days after his murder. This gives Japan’s ruling coalition a two-thirds supermajority needed to amend a clause in Japan’s Constitution that renounces war, paving the way for Japan to bolster its military capabilities. This is an ideal that Abe had been trying to push forward during his political career.

Secondly, William Lai, vice president of Taiwan, was able to make a historical breakthrough by going to Japan to attend Abe’s funeral. This was the senior-most official visit to Japan since bilateral ties between Taiwan and Japan were called off in 1972. Such outreach was almost impossible in the past, as both Taiwan and Japan did not want to anger the CCP or give the CCP any excuses to cause friction.

Thirdly, Frank Hsieh, Taiwan’s de facto ambassador to Tokyo, has announced that seven Japanese lawmakers would visit Taiwan in July. This again has tread on the previous “red line” set by the CCP in terms of what Taiwan and Japan can and cannot do.

If the CCP and its brainwashed little pinks have indeed gained a “mental” victory because of Abe’s assassination, in the real world the CCP has much more to lose for a few days of celebratory revelry.

However, it is too early for the world to declare victory, as the CCP will definitely not withdraw from the world stage on its own.

According to Hong Kong newspaper Ming Pao, Xi Jinping will be crowned as the “People’s Leader” at the CCP’s upcoming 20th National Congress this autumn.

Ming Pao also reports that the condition for the Chinese military to support Xi Jinping is that Xi is expected to “resolve the major issue of cross-strait division in the Taiwan Strait” when Xi is “at the helm of China.”

Inside China, the bursting of financial and real estate bubbles can happen at any time. When will Xi choose to “liberate Taiwan”? It may really depend on how desperate he is.

For now, the murder of Abe Shinzo has exposed even more clearly the real face of the Chinese Communist Party.