India Must Break Free from its ‘Non-Aligned’ Mindset 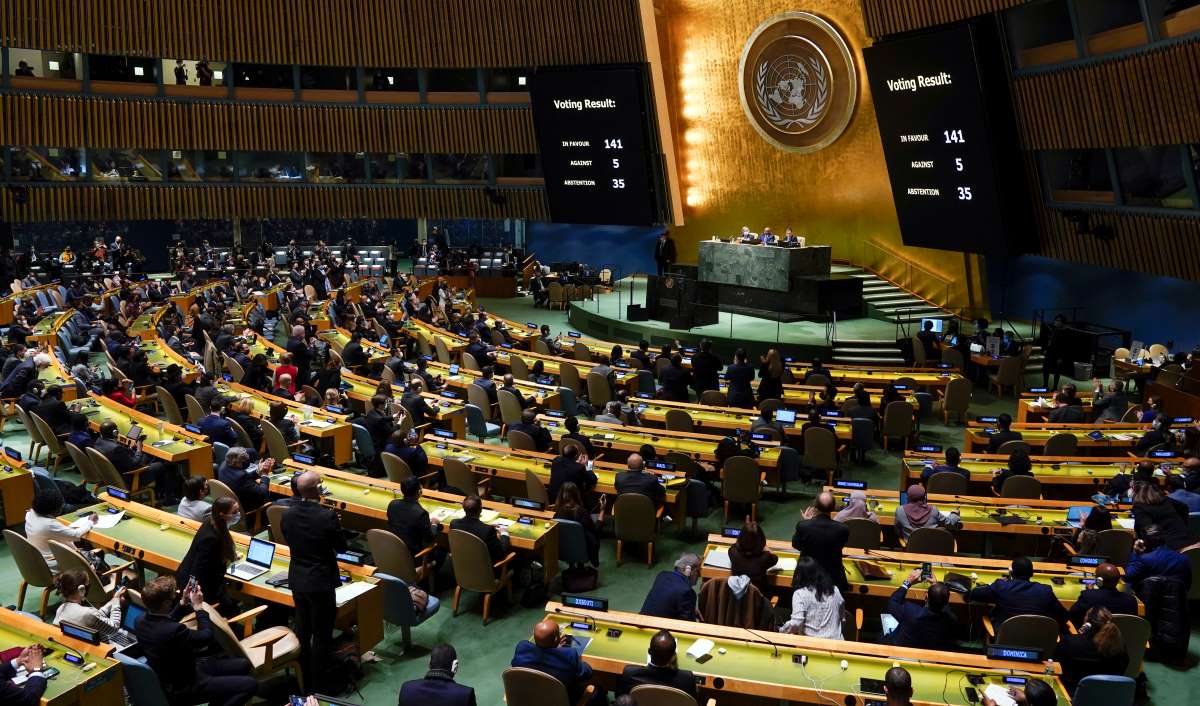 The results of a vote on a resolution concerning the Ukraine are displayed during an emergency meeting of the General Assembly at United Nations headquarters, Wednesday, March 2, 2022. (AP Photo/Seth Wenig)

A draft resolution to condemn Russia for its invasion of Ukraine ー S/2022/155 ー was adopted by an overwhelming majority at a special emergency session of the United Nations General Assembly last month. While passage was expected, what shocked the free world was that India “abstained” from voting.

India is a major democratic power that, along with Japan, the United States, and Australia, make up the membership of the Quad.

Then, two days later, the United States and other members of the Security Council took the measure to the UN General Assembly in the form of a similar resolution. The General Assembly allows no vetoes, and the resolution was approved by an overwhelming majority. India again abstained.

In its March 2 vote, the United Nations General Assembly overwhelmingly adopted the resolution condemning Russia’s invasion of Ukraine, with 141 of the 193 members voting in favor and five members opposing the measure. All of the seven industrialized nations (G7) were among those voting for the resolution, including Japan and the United States. Russia and North Korea were among the five countries opposed. Once again, India ーalong with 35 other countries ー abstained.

For nations that share the values of democracy and respect for human rights, there is no choice but to condemn Russia’s aggression against Ukraine.

New Delhi, in particular, should have criticized the Putin regime for its territorial expansionism, given its own experience with military’s pressure from China along its shared border. Nevertheless, India made the decision to tacitly approve of Russia’s violence by tolerating its behavior.

United States President Joe Biden called out India for abstaining on the day of the vote. In a US Senate hearing on the aggression, US Assistant Secretary of State for South and Central Asian Affairs Donald Lu testified that he is “working closely with India to emphasize the importance of a joint response condemning the aggression of Russia.”

In India, a foreign ministry spokesman tried to explain his country’s decision to abstain, saying it was based on “very careful consideration.”

India’s Ambassador to the United Nations T.S. Tirumurti issued a statement, stressing the need for cooperation between Russia and Ukraine for the safe evacuation of Indians stranded in Ukraine. Yet, that concern is not one that is unique to India.

It is generally understood that India’s real concerns derive from its close security ties with Russia, from which it imports a considerable amount of arms.

During the Cold War, India adhered to a non-alignment policy, remaining officially unaffiliated with or against any major power bloc. But in reality, it relied on the Soviet Union for most of its arms imports.

In 1971, the two countries signed the Treaty of Peace, Friendship and Co-operation. India, which was at odds with Pakistan over Kashmir, was considered to be a Soviet ally, while Pakistan became an important US partner in stopping the Soviet invasion of Afghanistan.

The Soviet Union withdrew from Afghanistan in the last years of the Cold War. In the meantime, United States ties with Pakistan faltered, while its ties with India grew closer.

India, on the other hand, has continued to emphasize its friendship with Russia since the collapse of the Soviet Union, from which it acquires a substantial percentage of its arms supply. Moreover, it is adamant about maintaining good relations with the militarily powerful as a means of countering the threat from China.

Just after Prime Minister Narendra Modi took office in 2014, India showed signs of breaking away from its Cold War thinking.

India was a founding member of the Conference of Heads of State or Government of Non-Aligned Countries in 1961. Yet, for the first time since its establishment, India was absent from the group’s 2016 summit, when Mr. Modi chose not to attend.

With the end of the Cold War and the growing threat from China, the decision reflected Modi’s diplomatic stance to strengthen relations with Japan and the United States for its security and economy. But its behavior at the United Nations this time gives the appearance that New Delhi has returned to Cold War era patterns.

Voting Results in the UN General Assembly resolution to condemn Russia for its aggression against Ukraine: 141 countries FOR, 5 countries AGAINST:

Twelve countries did not vote.

This is the time to consider how to survive in a world divided between freedom and coercion. The idea of invading a neighboring country by military force to expand one country’s territory can never be acceptable to countries that value freedom. “Abstaining” is simply not a choice.

The Indian bureaucracy has been advocating an omni-directional golden rule of inclusive diplomacy since it joined the non-alignment movement. It has long tried to strike a balance between Western countries on the one hand, and China and Russia on the other.

When Modi became prime minister, he demonstrated the political judgment to not be restricted by this outdated policy. However, these days he seems to be dragged down by old-fashioned bureaucratic thinking.

Mr. Prime Minister, if you proclaim your country to be the largest democracy in the world, you need to demonstrate it with actions consistent with those values.

Japan’s Prime Minister Fumio Kishida is now visiting India for a summit meeting with Mr. Modi. I strongly hope that he will draw India’s prime minister firmly into the democratic side of the world.