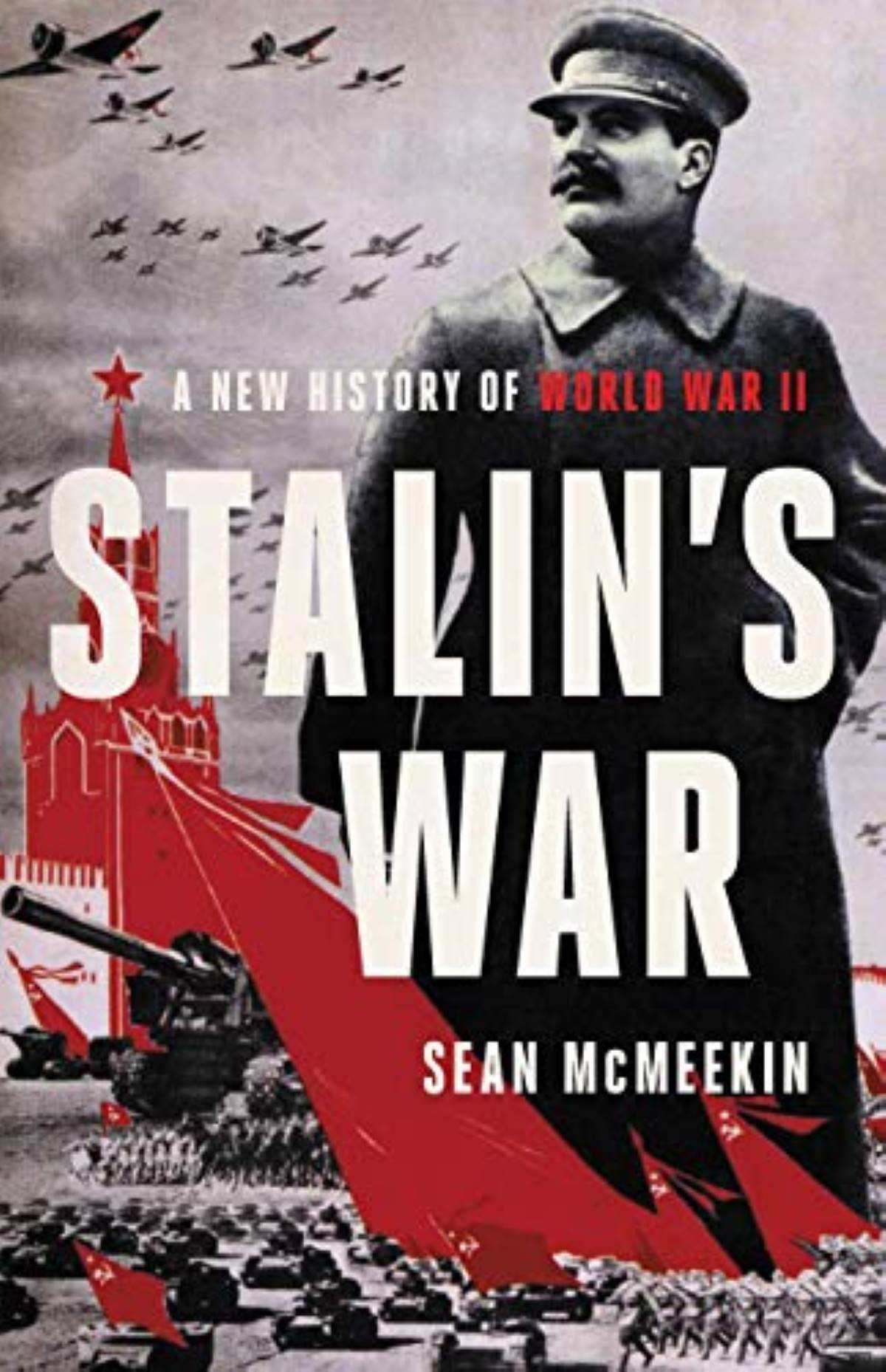 “…Harry [Hopkins] said that he’s not and that he doesn’t want anything but security for his country, and I think that if I give him everything I can and ask for nothing in return, noblesse oblige, he won’t try to annex anything and will work with me for a world of democracy and peace.”

Such was President Franklin Roosevelt’s appraisal of Josef Stalin in 1943, as related to William Bullitt, former United States Ambassador to the Soviet Union (p. 489).

Bard College professor of History Sean McMeekin’s volume beats down the ever-strident claim that it was Communist Russia that “won World War II in Europe”.

At the same time, there are those who denounce the claim that the “US and Britain had won World II” as a “shameless lie and distortion of the facts.”

McMeekin’s volume suggests in a sense that Marshal Stalin did win the war in Europe, through cold-bloodedness and treachery. Ruthlessness alone, however, did not win the war—Stalin got all the weapons and gear he needed for his army to fight ーand then someー from Roosevelt, leaving scraps for the British and American militaries to fight over.

With American-made weapons, the Red Army chased the Germans out of Russia and plowed through Eastern and Central Europe, not stopping until it devoured Berlin.

At the end of the war, Americans in Europe in effect found themselves in a face-off against an army of their own creation. America’s gallant former Soviet ally pointed its guns at Western Europe for the next 45 years. What did America receive in return for its generosity to Stalin?

How did the Soviets, following the opening of Operation Barbarossa ー cut off from critical German industrial imports and with significant losses to their own industrial, mineral, and agricultural resourcesー manage to eventually topple the “fascist Germans”? McMeekin points out — repeatedly — that Red Army fortunes were based entirely on American largess.

What did they get from Roosevelt? Ammunition, individual and crew-served weapons, uniforms, boots, tanks, trucks, ships, airplanes, food (including Spam), scarce strategic minerals, and even whole factories.

An elaborate supply system set up by the British and Americans, at significant cost and effort, continuously fed the Soviet war machine.

Roosevelt acquiesced to every one of Stalin’s demands, bypassing his own cabinet and Congressional oversight, and ignoring advice from advisors who were leery of Soviet intentions.

Stalin was not above outright lying for gain. He lamented to Harry Hopkins, Roosevelt’s right-hand man, shortly after Germany’s surrender that he “lost five million men in the war.”

McMeekin points out how the myth of “Soviet losses” took on a life of its own after the war, rising to “8 million,” then “20 million” and “27 million” during the Communist era. In 1996, the number was revised upward again, with Russia briefly claiming “42 million” died, of which, 26.4 million were counted as military deaths.

After reminding Hopkins of his 5 million men lost, Stalin demanded an increase of his share of the loot from the prostrate Germany. Hopkins, speaking for Roosevelt, agreed. And he further assured Stalin that Lend-Lease aid would continue, even though the war in Europe was over.

Stalin got more than his fair share of the loot, which included millions of prisoners of war who were subsequently utilized as slave laborers.

McMeekin notes that the Soviets shipped back to Russia captured war material, industrial assets, and intellectual property. They looted the Reichsbank of cash and works of art. An entire chapter on “Booty” is devoted to Stalin’s pillaging of Europe.

In addition to theft, McMeekin notes the rapes by the Red Army, of which Stalin was fully aware. Stalin merely shrugged, according to McKeekin, noting the soldiers fought hard, and adding: “over thousands of kilometers of his own devastated land,” so “what is so awful about his having fun with a woman after such horrors?”

After the European corpse was stripped to its bones, the Red Army moved eastward. In chapter 34 (start p. 630), titled “Red Star Over Asia: The Final Wages of Lend-Lease", McMeekin describes Stalin’s looting of China and Japan following Japan’s acceptance of the Potsdam Declaration on August 15, 1945.

There is also a concisely written chapter on Stalin’s devious prewar plan to keep rival Asian power Japan off his eastern flank with a non-aggression pact, and then by covertly encouraging an American war against Japan. More details, including Soviet mole Harry Dexter White’s influence on prewar American policy towards Japan, can be found elsewhere, in John Koster’s book, Operation Snow: How a Soviet Mole in FDR’s White House Triggered Pearl Harbor (Regnery, 2012).

In fact, McMeekin declares that of all “the diplomatic coups Stalin pulled off during the Second World War, those involving Japan were the most consistently astounding.”  The dynamics in mid-1941 were such that:

McMeekin makes a reasonably astute judgment. In preparation for his eventual looting of Asia, Stalin’s capitalist allies were as obsequious as they were during the European war.

At the 1943 Tehran Conference, Stalin initially ignored Roosevelt’s request for assistance against Japan. Instead, he demanded of Roosevelt and Churchill the earliest possible date for Operation Overlord.

Readers later learn that Stalin, “unofficially and off the record,” “quietly promised” that he would go to war against Japan “within three months of the end of the European war in exchange for … Mongolia, Sakhalin and the Kuril Islands” (Japan’s Northern Territories).

At the 1945 Yalta Conference, Stalin managed to include in his share:

Readers should remember that the Atlantic Charter of 1941, a declaration of Allied war aims, stated that the Allies sought “no aggrandizement, territorial or other.”

In addition to the already scheduled Lend-Lease aid, Stalin demanded, and received, “a special delivery” of “two months’ supply of food, fuel transportation equipment and other supplies…” to equip “1,500,000 men” and tanks, vehicles and airplanes for his Asian war.

McMeekin relates that the findings of the G-2 branch were pigeon-holed, hinting at conspiracy. However, one need not look far to see a conspiracy, as Roosevelt was surrounded by pro-Soviet agents and Soviet spies. McMeekin points them out.

Russia today refuses to relinquish the Northern Territories, which were overrun by Soviet military forces well after August 15, 1945, and well after the formal surrender in Tokyo Bay on September 2.

While popular Russian opinion is to not surrender the islands — they are seen as spoils grabbed in the “war against fascism” ー Japan nonetheless persists in politely requesting the return of their islands.

Soviet aid to Mao and his gang of thugs was crucial in their eventual victory over the Kuomintang with consequences that persist today. There is not a hint of reflection, much less remorse from modern Russians.

If the Northern Territories are ever returned, then perhaps Russia will apologize for its enslavement of over 600,000 Japanese POWs, and for the death of the ten percent who died as slaves in Siberia.

Maybe one day we will also hear remorse of Soviet mass rapes of Japanese women, characterized by McMeekin, incorrectly, as the “Soviet version of comfort women.”

Perhaps that day will arrive soon. Before that day, based on the findings of McMeekin’s book, Japan should prod the United States into doing more to get Russia to return the Northern Territories and to apologize for war crimes against the Japanese.

After all, it was President Roosevelt who invited Stalin to tear off pieces of Japan in exchange for a vague promise. The Soviets were, furthermore, armed with American-built weapons when they occupied the Northern Territories. It is the height of historical irony that the most deadly of Japan’s neighbors today, North Korea and Communist China, are products of America’s slavish devotion to Stalin.

McMeekin’s “new history of World War II” is a history that needs telling.

To Learn More: Visit the publisher’s web page for the book at this link.

To Purchase the Book: The book may be purchased directly from the publisher here or on Amazon here, and at other booksellers.

Dr. Hama works in the biomedical sector and lives in Shizuoka Prefecture. He received his PhD in anatomy and cell biology from the University of Illinois, Chicago and ever since has worked with various pharmaceutical and biotechnology companies.