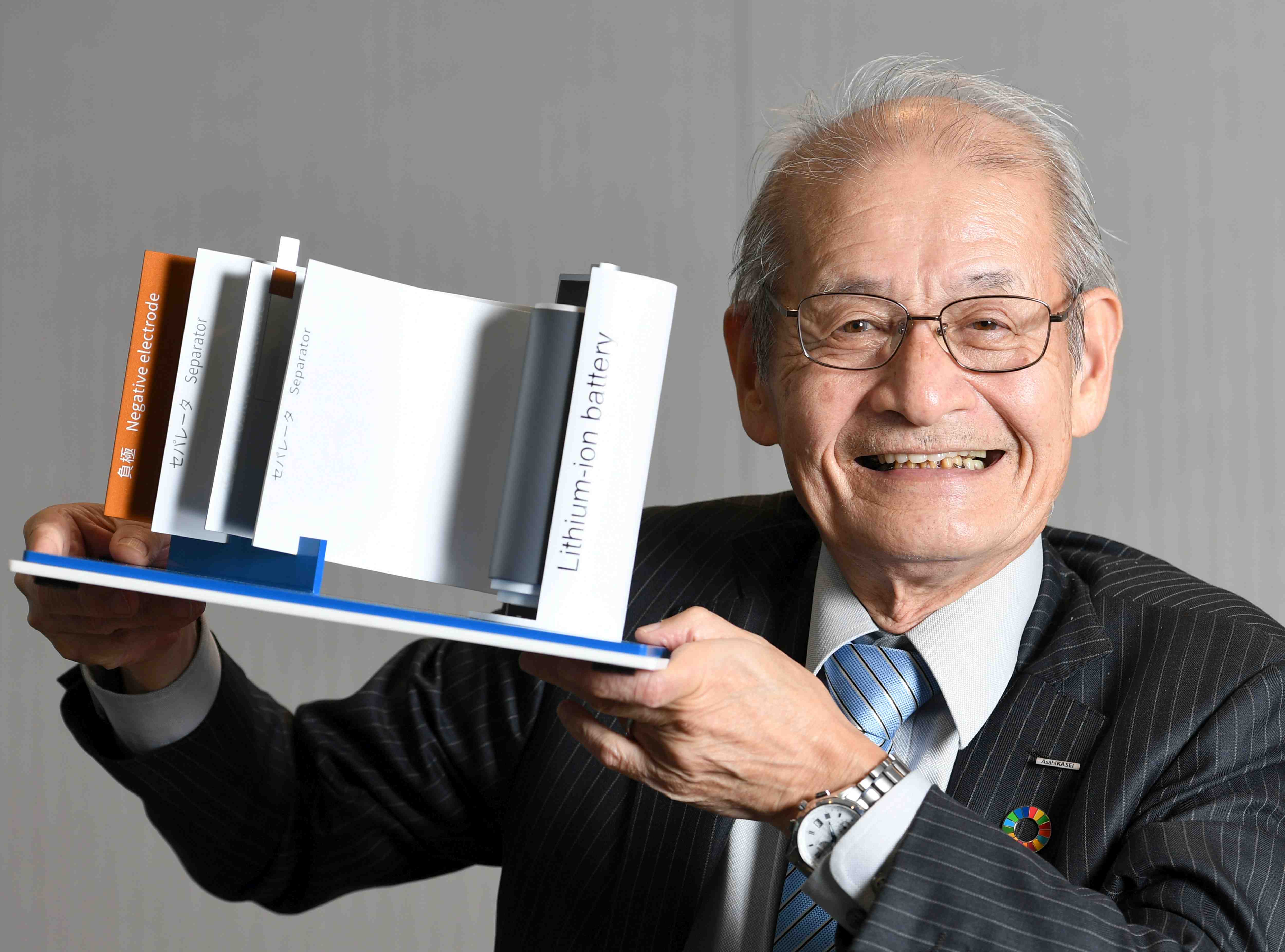 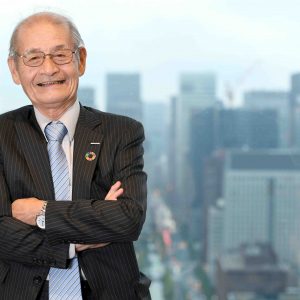 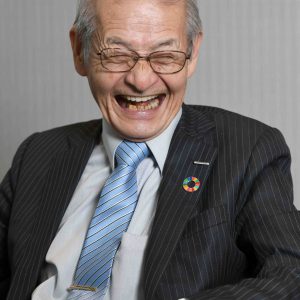 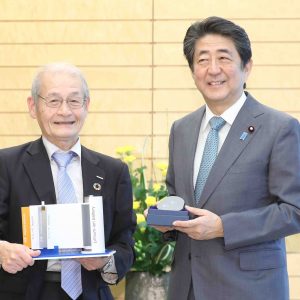 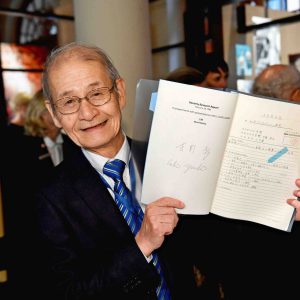 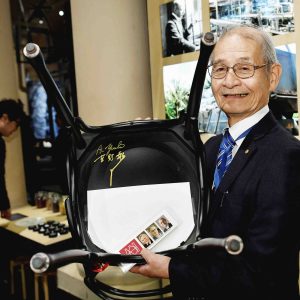 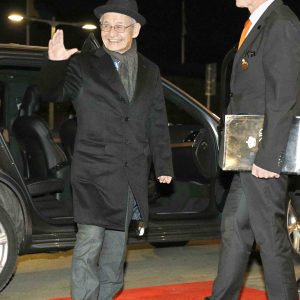 On Tuesday, December 10, Japanese scientist Akira Yoshino will receive his 2019 Nobel Prize in Chemistry in a ceremony in Stockholm, Sweden, but he sat down with The Sankei Shimbun before he left to talk about global warming and the lithium battery, which he had developed.

The 71-year-old Nobel Laureate, an honorary fellow with chemical company Asahi Kasei Corp., emphasized that human beings “can absolutely surmount problems of global warming,” by making use of lithium-ion batteries to boost the performance of electric vehicles, for example.

He noted that we are now “on the eve of the Fourth Industrial Revolution” and, referring to the potential achievements of coming generations, underlined the importance of “accumulating experience while anticipating what you hope for the future.”

Excerpts from the interview are below.

You came from an industry background to win the Nobel Prize.

The roots of the research of lithium-ion batteries dates back to studies by such Japanese scholars as Kenichi Fukui, who was awarded the Nobel Prize in 1981, and Hideki Shirakawa, who received the prize 19 years later for the discovery of polyacetylene. Another 19 years later, I received the Nobel Prize. This demonstrates that the universities have successfully handed advancements in knowledge over to the industrial world. It will be interesting to see whether academia-industry collaboration can result in society’s incorporation of lithium-ion batteries in new ways, bringing the award of another Nobel Prize again in, say, another 19 years from now, I suppose.

What would you say is needed for outstanding research and development?

You need to be able to set goals as if it’s a marathon. Although it’s difficult to do, what is important is to be able to anticipate what will be needed 10 or 15 years from now. Then you calculate what experience and expertise, and what research, is necessary to get there. What is of utmost importance is to have confidence in yourself. Then, you can overcome the hurdles you will undoubtedly encounter.

Although previously there weren’t any good examples of academia-industry collaboration, the lithium-ion battery research has established a suitable precedent, I believe. Now that the Nobel Prize is within reach of researchers working in industry, I hope to see young people following suit.

What can Japan do to accelerate technological innovation and ramp up competitiveness?

Even though Japan’s domestic manufacturing industries, such as those for smartphones and computers, have been on the wane, the upstream industries that manufacture core parts and materials for those gadgets have been growing soundly. If Japanese downstream firms emerge that are capable of leading the world while linking with upstream industries, with prowess equivalent to the GAFA and other U.S. IT powerhouses, then Japan’s international competitiveness will certainly become immensely powerful. To that end, we need to nurture venture firms in Japan.

Our mobile-oriented society made possible by lithium-ion batteries is convenient, but there are both good and bad aspects, aren’t there?

I completely understand what you mean. Cell phones are an outrageous infringement on privacy, for instance (laughs). However, they also have great merit in that they enable us to communicate efficiently with a far larger number of people than before.

The IT revolution has triggered the transformation of society.

In the decade from around 1985, one IT product was developed and marketed after another, and most everyone involved was excited and willing to share information, irrespective of which companies they worked for. Now we are on the eve of the Fourth Industrial Revolution with fast-progressing AI (artificial intelligence) and Internet of Things (IoT) technologies, and the situation resembles that earlier period.

AI and IoT have the potential to inspire an array of new industries capable of making significant yet low cost contributions to the environment. These are of revolutionary significance in solving our environmental problems. I am really looking forward to seeing how lithium-ion batteries will be involved in carving out this new world.

What kind of a new, future society would you like to see?

I would like to see lithium-ion batteries play a role as the lubricant of energy. Unlike solar cells, wind power generation, and like technologies, lithium-ion batteries do not have power generation capability. So, they do not play a starring role, but they can efficiently store energy for use whenever it might be needed. A major task in this connection is how to incorporate their use into our social system. On this front, electric cars could play a major role. Now is the time for fashioning sustainable paths to solve environmental problems.

The answer is — absolutely. Let me assure you of it. This will come to happen in the not-so-distant future as a result of the upcoming Fourth Industrial Revolution. It will bring about the advent of highly convenient, inexpensive products and staggeringly huge businesses, along with golden opportunities for young people.

Some companies will naturally vanish in the process, but others will make the shift to new industries and grow as a result. It will be a situation of do or die.

I started studying lithium-ion batteries when I was 33. In those days, it was easy for scientists in their mid-30s to move around freely and test ideas to gain knowledge and authority. I wonder if this can be said about young scientists in that age bracket today. We have to create an environment for people in that age group to have room to test their ideas and advance new developments.

Do you have a message for young people?

Today’s students have goals, but they have yet to discover the path to get there. There are too few people around them who have experienced success. They don’t know how to pursue their goals, and end up confused about what direction to take. I’d like to tell them to look ahead to the time when they are in their mid-30s, and study and gain the experience they need to pursue their goals when the time comes.

What is your view about the trend away from science studies?

Stimulation is needed. In any field, including sports and sciences, if newspapers carry an article featuring someone who has made a great discovery or received a big prize for their accomplishment at the top of their front page once a month or so, young people will be stimulated. In this case, I would be very happy if some of them were pleased that I have been awarded the Nobel Prize.

(Click here to read a related article in original Japanese.)