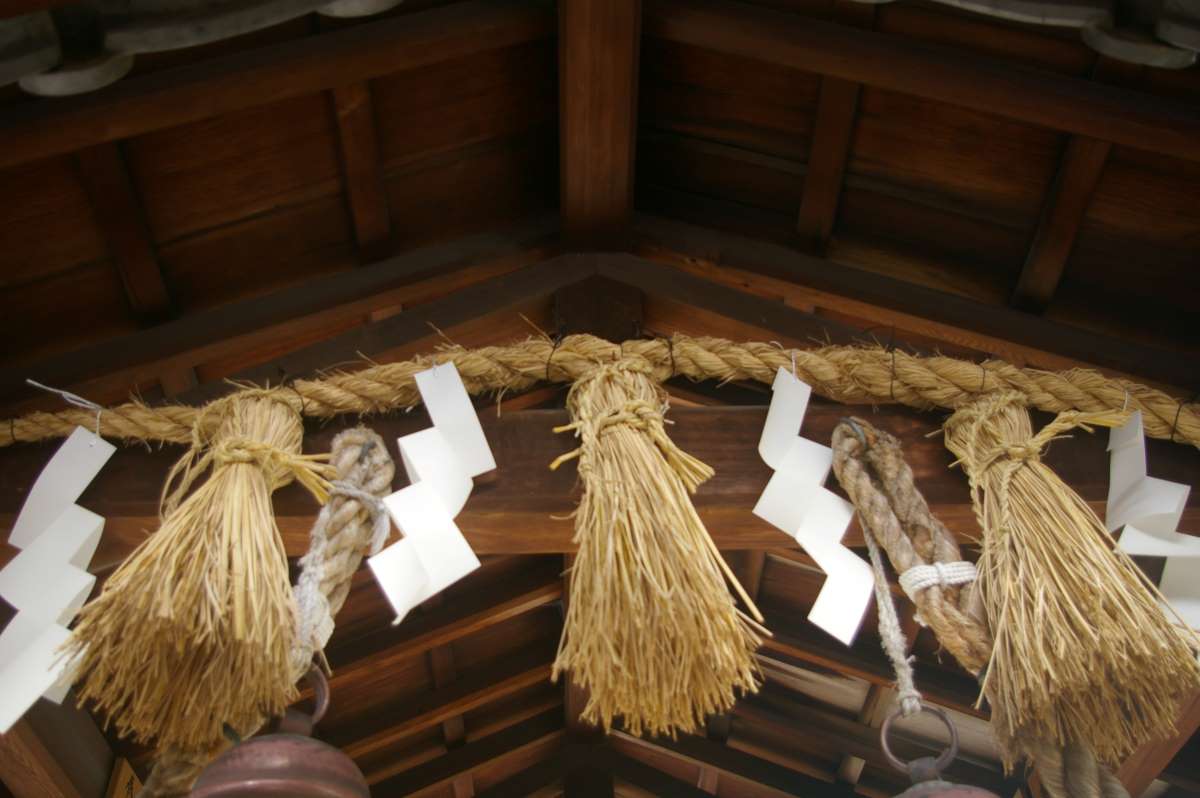 The Ayato Kunaka Shrine (Photo by the author)

Sixth in a series

The Gion Matsuri is best known for the spectacular yama and hoko floats that parade through the heart of Kyoto during the Saki Matsuri on the morning of July 17 and the Ato Matsuri on the morning of July 24. The former is often broadcast live on NHK and if you are lucky enough to witness either one of the processions in person, you will surely find it an unforgettable experience.

Yet the fact remains that in terms of importance, these festivities are decidedly secondary to the mikoshi (portable shrine) processions that take the three deities of the Yasaka Shrine from the east side of the Kamo River into the city center for a one-week stay and then back home again. These processions are held respectively on the evenings of those same two days.

Undeniably, one of the highlights of the entire Gion Festival takes place on the morning of July 17 when the chigo from the Naginata Hoko, which by tradition is always first in the line of floats on that day, cuts the sacred shimenawa rope with a sword to signal the start of the Yamahoko Junko parade. In this capacity, he serves as the servant and representative of Yasaka Shrine kami.

No doubt this ceremony is meant to symbolize the temporary elimination of the barrier between the sacred realm of the festival deities and the human world, creating a space for them to interact.

The arresting sight of this young boy, dressed in an ornate costume of ancient design, face covered with pasty white makeup, makes the Naginata Hoko chigo the poster boy for each year’s festival.

In fact, several types of chigo, some as young as nursery school age, as well as komuro attendants, take part in the matsuri. But undoubtedly the two most important in terms of the roles they play are this Naginata Hoko Chigo and the two Kuze Komagata Chigo who accompany the processions of mikoshi portable shrines.

Performing the shimenawa-kiri (rope-cutting) ritual is considered an immense honor in Kyoto social circles. Traditionally, the Naginata Hoko Chigo was chosen from one of the most prominent families residing in the zone where the festival chonai neighborhoods are located through a process that is not made public.

One of the known criteria is that the family must not have suffered any serious problems (including disease) during the previous year. By one estimate the family of a Naginata Hoko chigo (no doubt with help from supporters) spends more than ￥20 million JPY (about $150,000 USD) for their boy to play this exalted role. There have even been cases of youngsters from different generations of the same family being chosen to play the role.

Up until the 1800s, all the hoko seem to have had chigo riding on them. Nowadays, nearly all the floats have replaced their chigo with dolls.


Children at the Heart of the Gion Matsuri

But what exactly is a chigo? Shamanism is the deepest layer of the Japanese religious tradition and in the past faith healers, exorcists and other such spiritual specialists would use young children and women to convey oracles and other spirit messages.

More generally, it was believed that a kami could enter objects such as certain trees, rocks or objects like the imperial regalia (sword, mirror and magatama curved jewels), as well as human beings. Pure young boys made the perfect yorimashi or vessels for the kami to descend into.

There are three “celestial children” at the heart of the Gion Festival who are usually between ages eight and ten. The children visit the Yasaka Shrine on July 13 — the Naginata Hoko Chigo in the morning and the two Kuze Kamigata Chigo in the afternoon. There they take part in ceremonies in which they receive a goshinki ー a talisman made of sacred cedar.

Thereafter, in preparation for their sacred role in the Gion Festival, these three most important chigo traditionally are not allowed to have any contact with women during the run-up to the festival. They must also avoid certain foods for a stipulated period.

After the kami enter their bodies, their feet are not supposed to touch the earth, either. Furthermore, they wear special clothing and have distinctive haircuts which set them apart.

An Ancient Parade of Mikoshi

The Shinkosai (Mikoshi Togyo) parade of mikoshi to pray for the health and happiness of people along the route is far older than the Yamahoko Junko. It can be traced back to the original visit of Gozu Tenno to the Shinsen-en for the goryo-e in 869.

The Gion Goryo-e underwent a major change at the end of the Heian period, with establishment of the otabisho. The mikoshi were brought to these locations on the west side of the Kamo River so the kami could enjoy a temporary stay, during which city dwellers would entertain them in various ways.

Up until the time of the warlord Hideyoshi, the mikoshi carrying Gozu Tenno and the Hachioji (eight princes) went to one spot. and that of his wife Harisaijo went to a different spot. Since the change in the late 16th century, all three of the Gion kami have been put on display at the same otabisho.

Strangely enough, perhaps the most important participants in the entire Gion Matsuri are rarely mentioned in guidebooks or online tourism websites. Moreover, they receive hardly any publicity.

These are the two Kuze Komagata Chigo whose bodies become during the festival what may be described as avatars of Susanoo-no-Mikoto (Gozu Tenno before the Meiji Restoration) or sacred vehicles for his mitama.

In a sense they become incarnations of Susano in the flesh.

During the Shinkosai on the evening of July 17, three mikoshi depart Yasaka Shrine for the otabisho, traveling there by different routes.

The older Kuze Chigo does the same during the Kankosai return journey to Yasaka Shrine on July 24. Each wears the wooden horsehead (komagata) on his chest, which functions as a goshintai or object a kami temporarily descends into.

A Shrine for the Fearsome Susanoo

The Ayato Kunaka Shrine, which is located in Minami-ku in south Kyoto, is officially dedicated to Susanoo-no-Mikoto, or to be more precise, his aramitama. His nigimitama is enshrined at Yasaka Jinja. In other words, the deity has two aspects: the pacific, gentle nigimitama and the rough, violent aramitama, which bring respectively good harvests and natural disasters.

The two mitama become one through a highly mystical process at the time of the festival. Historical records describe the relation of the two mitama as “one revealed as two, two united as one.”

It sounds like something out of the Tao Te Ching.

Unless the Kuze Komagata Chigo arrives and the rite to unite the two mitama is performed, the three mikoshi carrying the kami cannot be moved even one step out of the Yasaka Shrine precincts on July 17, let alone go to the otabisho located across the river to stay for one week.

The belief is that if things are done otherwise, an epidemic is certain to follow. During the period the three kami are sojourning at the obtabisho, Yasaka Shrine is in effect bereft of its principal deities.

On the day of the Shinkosai, the Kuze Chigo who will participate in the procession arrives at and then enters Yasaka Shrine on horseback with the goshintai hanging on his chest. This is an exception to a strong taboo.

For example, the Naginata Hoko Chigo, who is said to enjoy a status equivalent to that of a feudal lord (daimyo) with an income of 100,000 koku (in other words, a big shot) or even members of the imperial family, are required to dismount at the South Gate (which is the main shrine entrance) before entering.

The Kuze Komagata Chigo are exceptions when performing their role as yorimashi because they are, so to speak, Susanoo in the flesh. The people of Kuze take great pride in this special treatment.

Searching Through the Fog of History

When I learned these fascinating facts, I became intrigued with the traditions of the Kuze Chigo. Consequently, I was sorely disappointed to discover that there is little information even in Japanese concerning this religious custom on the Internet. Nor could I find any books on the subject.

Eventually I was able to track down an article by Professor Masahiko Kawahara, published in the May 1962 issue of the journal Bunkashi Kenkyu (Cultural History Research), that contained some valuable information. But at the same time, it did not completely clear up the mystery.

Next: The Gion Matsuri: Energizing and Celebrating the Kami