What To Expect At The Tokyo International Film Festival 2022 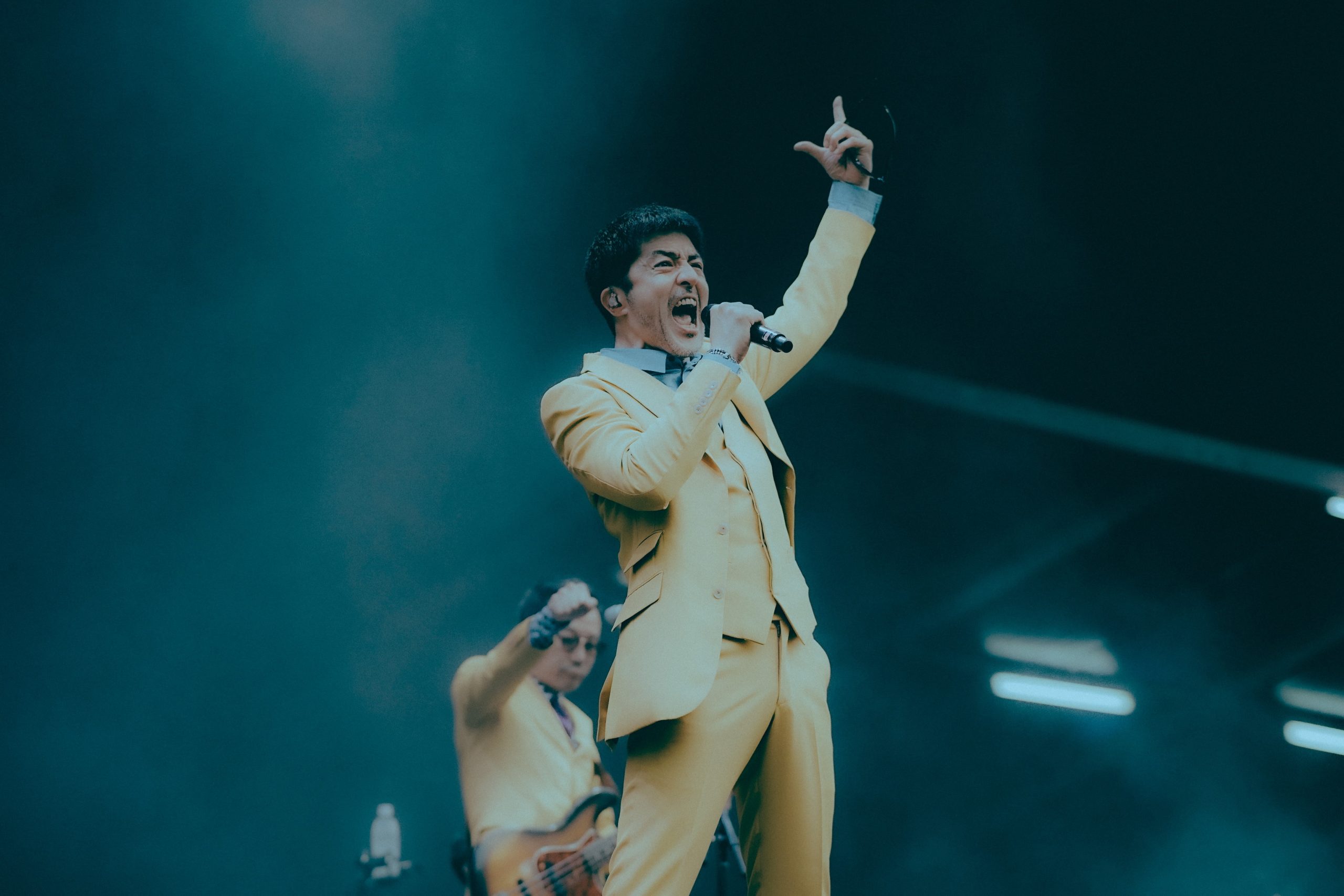 Bringing energy-infused ska songs to Japan and the world since 1989, Tokyo Ska Paradise Orchestra has their own unique style. Gaining renewed visibility for their performance in the closing ceremony of the Tokyo 2020 Olympic Games, they’ve also scored collaborations with a variety of other artists, including a recent one with YOASOBI vocalist Lilas Ikuta.

The group performed on the Green Stage at Fuji Rock 2022 on July 30, including a guest spot by fellow artist and Fuji Rock veteran Hanaregumi.

On Sunday, July 31, JAPAN Forward caught up with Atsushi Yanaka, Tokyo Ska Paradise Orchestra’s baritone saxophonist, to talk about the band’s long career, its collaborations, and its message to the world.

How does it feel to be back at Fuji Rock?

It’s the best feeling, we are so happy. Fuji Rock is special, with a full lineup of artists playing on these legendary stages, and we feel privileged to be part of this.

On the other hand, we also have the impression that many people here [at Fuji Rock] have a very detailed knowledge of music. So we feel like we can’t make mistakes, and want to put in even more effort than usual.

The fact that the crowds really cheer us on ー for all of us ー is really a priceless experience that we will treasure and never forget.


The audience really came alive during your performance. Why do you think that is?

One factor is that ska is a type of music that even if you are not an expert, you can still enjoy it. You don't need to think about the music beforehand. But instead we hope you will think about it afterwards.

It’s the kind of music capable of generating instant happiness. It has a party feel that is very approachable – it's music that wants to make friends with the listener.

In general, if you had to explain Tokyo Ska Paradise Orchestra to people abroad, what would you say?

Many years ago we wrote a song called “Paradise Has NO BORDER.” We think it's important to work with people as if there were no borders.

That is why we have made friends with many artists in Japan, and they participate in our performances. Differences in age can be a barrier, but we want to become a goal for young artists so that they want to join us and keep performing with us.

Our name has paradise in it, we want to create a paradise for people!

How do audiences overseas react to your music?

Compared to the audience in Japan, people abroad don’t always know about us. That means, especially at music festivals, that they first listen to us without any preconceived notions and just focus on the music.

If they are clapping and cheering by the end of the performance, that really reminds us that what we are doing is not a mistake. It’s the most amazing type of happiness.


Why did you decide to perform together with Hanaregumi at Fuji Rock?

Hanaregumi and Tokyo Ska Paradise Orchestra collaborated many times before, and we even performed as Hararegumi's backing band. It was then that Hanaregumi suggested that we could showcase this collaboration at Fuji Rock, and that's how our performance came about.

He (Hanaregumi) is more than a friend, he’s like family. And thanks to an initial collaboration, there are many artists with whom we now have a family-like relationship. Rather than a give and take, it’s a very natural relationship where we can just ask each other for things.


Are collaborations easier when you are an instrumental band?

We are happy whenever we can include a message in our lyrics.

We created the song “Free Free Free” (released on July 27, 2022, featuring Lilas Ikuta from YOASOBI). It’s about our current world, which has been suffering from the pandemic for the last two and a half years.

We wanted to send a message to enjoy life, to be happy.

For example, we include lyrics about people putting up with wearing masks for so long. We have many young fans who identify with the song, and so we are really glad that we put this song together.

As an instrumental band, we have the freedom to try different things.

I really like movie soundtracks, as the music composition is mostly instrumental. This gives us the opportunity to perform as if we were creating the soundtrack of life itself, creating theme songs, for example.

Think about it: if while driving a car you play the James Bond theme song, you also feel like you have become James Bond, right?

Instrumental music has the power to give courage. It’s different from songs with lyrics. [Having said this] both songs with and without lyrics are fun.


After more than 30 years together, how do you keep the freshness in your performances?

We try to perform abroad and collaborate with different musicians from different genres. I think that both types of collaborations are adventures where one gains incredible experience and learns a lot.

As the years go by, we have become veterans in the industry. But if we just retreat in ourselves, the tendency is just to continue to do things the same way. Trying new things becomes burdensome in music, but also in life.

When you collaborate with someone, it’s like you are showing everything you have. You are naked in front of them. It’s an opportunity to share know-how, it’s energizing.

For us, the opportunity to have collaborations is very fun and extremely important, even if it can be challenging sometimes.

And the funny thing is that even collaborations that seem impossible are made possible in the field of music.

Are there any artists from abroad with whom you would like to collaborate?

We have worked in the past with Los Auténticos Decandentes, a ska band from Argentina.

Working on a song with the Chilean band Moral Distraida was a really good experience, they have a very Latin music feel.

I think that ska is really good as it’s a type of music that has ways of including other types of music. After all, ska was born from a mixture of different types of Latin music.

Now it’s possible to communicate online and record, the technology has really developed during the pandemic. We want to collaborate with many people, not necessarily just ska bands, but artists from other genres, like rap for example.


What about Japanese artists?

We are also working together with artists in their early 20s. I think that recently the young generation is very talented. I am not sure why, maybe because they have the opportunity to teach themselves by watching videos these days.

All I can say is that often they are very good from a technical standpoint, but also at singing and playing instruments.

Our generation, we would mess around and play some music together, and try to extract our potential energy. I perceive that recently young artists don’t play around as much. They practice like they are like athletes.

Working together with these artists is a very formative experience for us. And we want to work with them in the future, also in other genres.

For example, we have worked in the past with Hiromi Uehara, a jazz pianist, who played in the opening ceremony of the Tokyo 2020 Olympics.


The Tokyo 2020 Olympics performance: did you feel pressure performing while the whole world was watching?

Of course, it’s a high-pressure situation because it’s such a great opportunity. But we tried to give it our best shot.

In Japan, it was a strange period. Many people were against the Olympics. But there were people, including the volunteers, who worked so hard to make the Games happen.

We wanted to give our best to thank all these people who made it possible. We felt that was an important message to deliver, and we had a good time!

In the midst of this, we also became a trending topic on Twitter in Mexico. Friends in Brazil took screenshots [of our Olympics performance] and posted them on Instagram. It was good fun.

Did you feel pressure as a representative of Japan?

We don’t have that sort of pressure when we perform abroad.

But in Japan, it’s not a given that everyone likes our music or approves of us representing them abroad. We feel it is important to gain the understanding of people in Japan and convince them that we deserve the role.

So in that sense, we did feel pressure to perform well.


Do you plan to tour abroad again once the pandemic settles down?

We were worried that coming back to Japan was going to be tricky because of COVID-19 guidelines which might make it difficult to work as normal. So we gave up on that idea, but we think we will be able to go next year.

When we performed for the Olympics [on August 8, 2021], we were trending on Twitter in Mexico. It made us happy. “They aren’t forgetting us!” we thought.


Do you have a message for your international fans?

In today’s world, there are so many ways to listen to music. There is YouTube, and Spotify, and so on. In that context, a band [like us] that might seem famous only in Japan, in reality is popular in Mexico, Chile, and Spain.

We can’t physically go abroad right now, but there are so many people who listen to our music in other countries. And we can’t wait to go and meet our ska-fans again and party together!