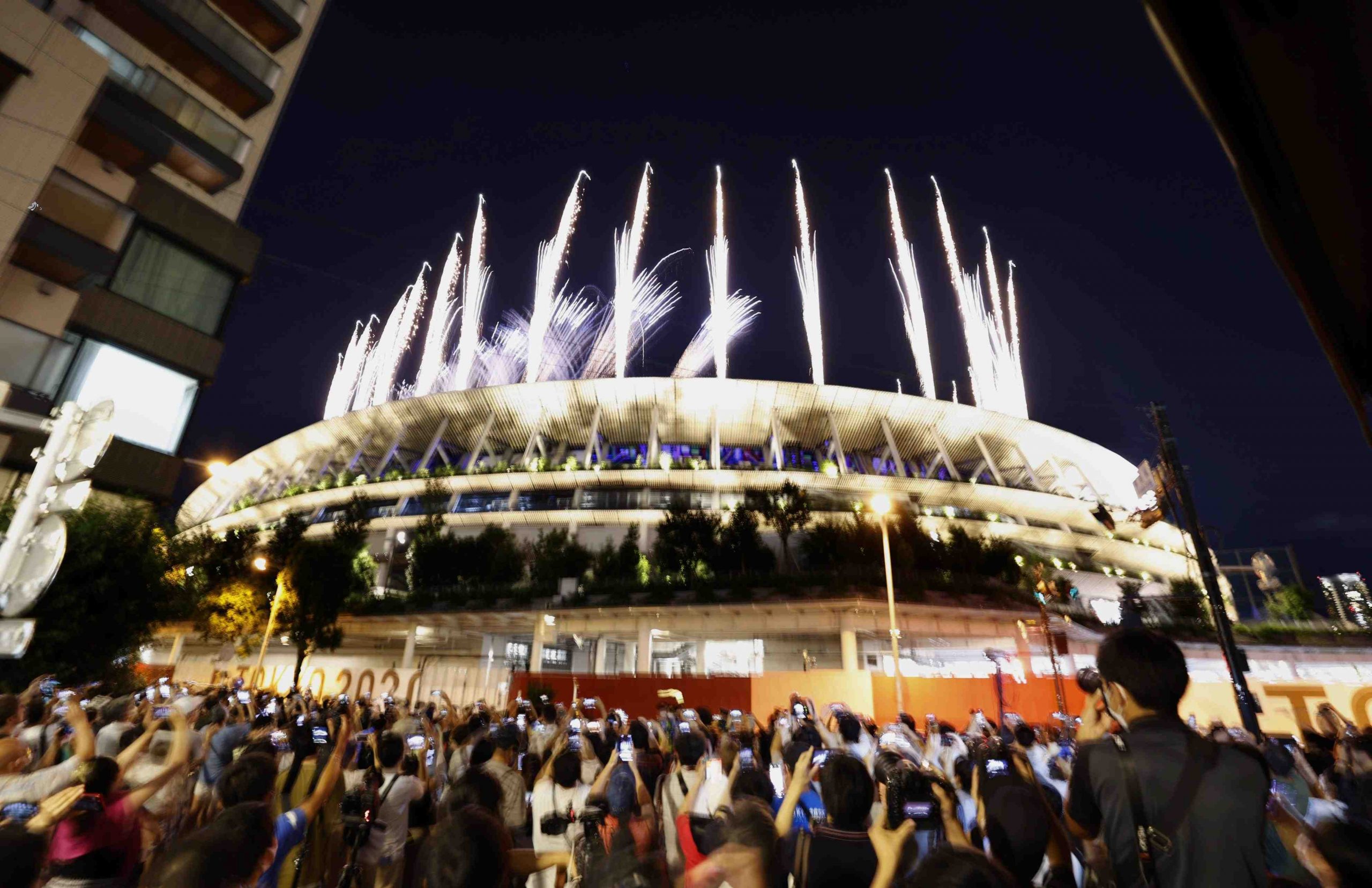 For all those living in Japan, there are certain things you would always do with visitors: go to a traditional festival, take in the best of Tokyo nightlife, thanking them for coming from so far away.

The Closing Ceremony of these historic Olympics Games on August 8 was a beautiful display of these elements, sharing a window on the best of Tokyo for the athletes and bringing a graceful end to the Games.

For Japan, an unprecedented Olympics also brought a historic medal haul: 27 gold, 14 silver and 17 bronze medals, for a total of 58. It overtook the record set in Rio de Janeiro in 2016 when Japan amassed  41 medals (12 gold, 8 silver and 21 bronze).

The ceremony opened with the entrance of Japan’s Crown Prince Akishino and International Olympic Committee President Thomas Bach. Shortly after, they were joined by Tokyo Governor Yuriko Koike and Japanese Prime Minister Yoshihide Suga for the ceremony.

Six people carrying the Japanese flag, including athletes that shone in the Tokyo Olympics such as gold medalist Japanese judoka Naohisa Takato and two-time gold medalist in swimming Yui Ohashi, along with Doctor Hiroyuki Yokota, who represented the medical profession that has worked so hard for humanity during COVID-19.

Representatives of all groups of the all-female musical theater troupe Takarazuka performed a rather emotional rendition of the Japanese anthem, Kimigayo.

In a much more relaxed atmosphere compared to the Opening Ceremony, many of the athletes who were still in Tokyo entered the New National Stadium, sporting their medals, smiling and hugging each other, representing a total of 205 countries, plus the IOC Refugee Olympic Team.

A Show for Athletes

After the pomp and circumstance, came a proper show to give a glimpse of Tokyo nightlife and a warm sendoff to the athletes. To wow onlookers, there was a stunning projection mapping of lights, which went to form the five Olympics rings illuminating the National Stadium.

With a message to keep your chin up even in difficult times, Sakamoto’s song was the tune played during the Opening Ceremony of the 1964 Olympics in Tokyo.

While the upbeat music played, performers, dancers, even a performer with a kendama, a traditional toy from Japan, performed for the onlookers.

The dance and music paused for the traditional medal awards ceremony for the weekend marathon athletes. While it’s customary to include the men’s ceremony at this point, Tokyo 2020 introduced the medal ceremony for the women athletes in the closing ceremony for the first time. Kenya’s Peres Jepchirchir and Brigid Kosgei ascended the podium to collect their gold and silver medal, respectively, joined by American Molly Seidel who collected bronze. The men’s marathon medalists were also introduced.

At just after 9 p.m. the four new members of the IOC entered the stadium, including former Japanese fencer Yuki Ota and Italian swimming icon Federica Pellegrini. At the same time, a moment was taken to share a film to thank the over 70,000 volunteers.

In a full blast of Japanese traditional culture, a taiko drum performance opened the next section of the ceremony, starting with a performance by Nagano native dancer Aoi Yamada.

In a scene which must have felt quite nostalgic for Japanese spectators, organizers showed a short film displaying some of the best festivals and music celebrations around the country, such as a musical ritual by the Ainu in Hokkaido, Eisa Dance from Okinawa and the Gujo Odori from Gifu, which led nicely to a live bon odori performance in the stadium.

It was particularly sweet to see the athletes dancing along with the traditional music, just as they would at a festival in Japan.

Passing the Baton to Paris

At just after half past 9, it was the time to pass the baton to the next Olympic host: Paris, in 2024. Tokyo Governor Yuriko Koike handed back the Olympic flag to IOC President Bach, who in turn entrusted the flag to Paris Mayor Anne Hidalgo.

After the customary raising of the French flag and recorded performance of the French national anthem, La Marseillaise by the French National Orchestra, spectators enjoyed a video showing BMX cyclists showing off the famous sites in and around Paris, along with live footage of people in Paris, including President Emmanuel Macron on top of the Eiffel Tower.

As a tribute to the next Olympics hosts, the new tower in Tokyo, Skytree, also shone with the colors of the French flag ー blue, white and red.

It was then the time for speeches to commemorate the occasion. President of the Tokyo 2020 Organizing Committee Seiko Hashimoto seemed visibly moved as she delivered her speech in front of the athletes.

After thanking the medical staff and all of the citizens of Japan, she said to athletes:

“With the joy of winners, there was the remorse of losers. In the moment when these two groups merge, this is the beautiful sight of the Olympics and the value that the Olympics have.

“Please don’t forget this moment, this view, continue to speak in the future with pride and confidence about what you have done.”

Hashimoto concluded: “The Olympic flame burning in Tokyo will be quietly extinguished. However, the flame of hope will not fade. I hope that this hope will illuminate the hearts of people all over the world.”

For his part, Bach stressed the historic moment of the Olympics:

“You inspired us with this unifying power of sport. This was even more remarkable given the many challenges you had to face because of the pandemic. In these difficult times, you give the world the most precious of gifts: hope.

“For the first time since the pandemic began, the entire world came together,” the IOC president said. “This gives us hope. This gives us faith in the future. On behalf of all the athletes, we say: Thank you Tokyo!”

And just like that, the ceremony entered its final stage, with a live performance of the song Hoshimeguri no Uta (Star Tour Song), composed by Iwate Prefecture native Kenji Miyazawa, sung by Tokyo’s Suginami Children Chorus and the Japanese singer Shinobu Otake.

Finally, on the notes of the song Tsuki no Hikari (The Moon’s Light), composed by Isao Tomita, the Tokyo 2020 Olympic flame was extinguished.

With a background of the multicolored firework display, the monitors on the screen read a huge “ARIGATO” (thank you). The message was in the same font used for the parting message to athletes in 1964, which was “Sayonara.”

It was perhaps this expression that most resounded: thank you.

It stood for all the times that athletes repeated it upon winning their countless medals during the Olympics, for the volunteers that made all of it happen, for the organizers that pulled off Tokyo 2020 during a global pandemic.

And perhaps most of all, it was a cry resonating from everyone who witnessed this historic version of the Games. Thank you to the athletes who, for two weeks with their incredible achievements, made our hopes and dreams soar.