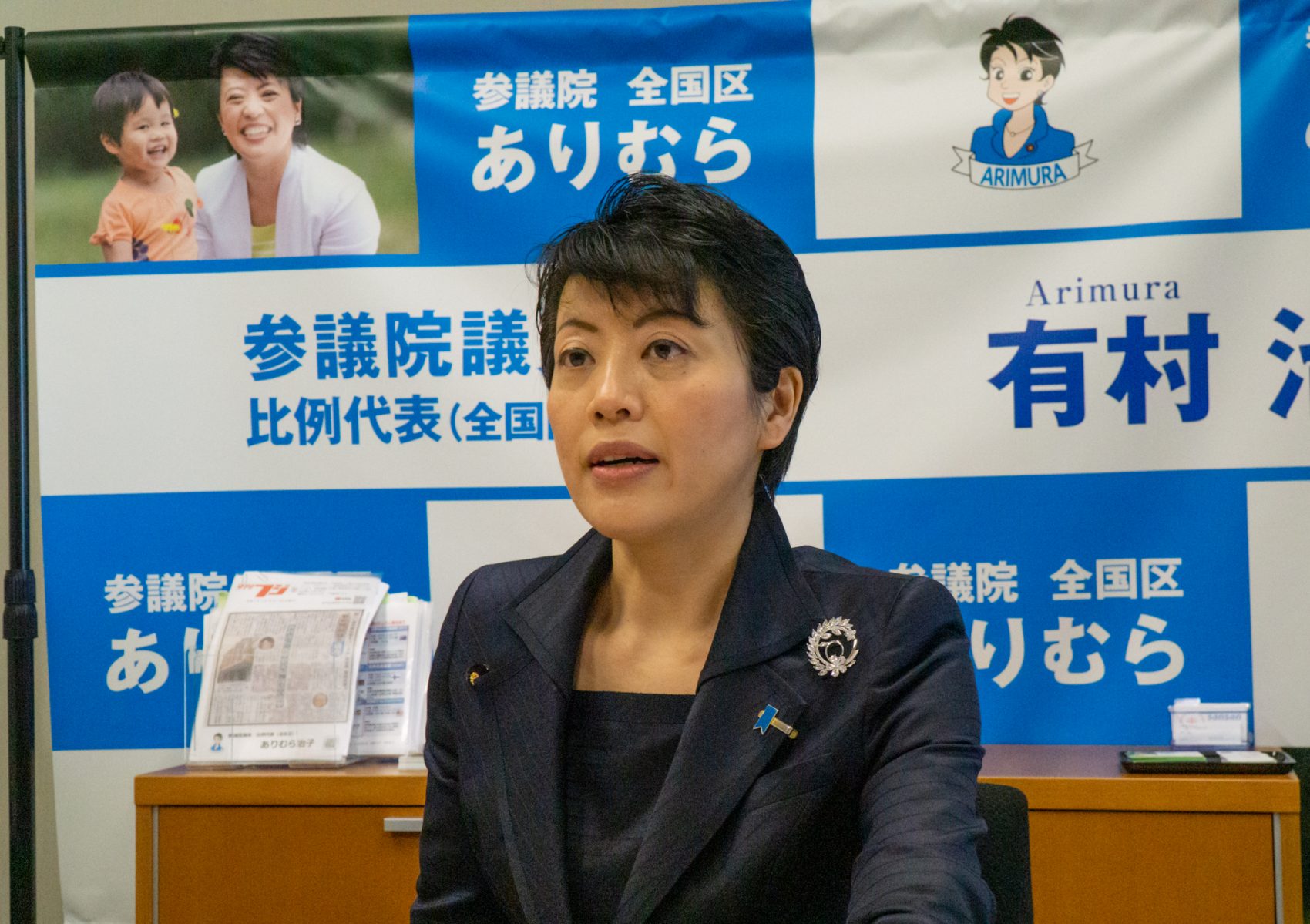 The Q&A session of the House of Councillors (Upper House) of the Japanese Diet on March 22, 2021, was anything but ordinary. Haruko Arimura, 50, in her fourth term and a member of the ruling Liberal Democrat Party (LDP), held a stunningly articulate exchange with the Minister of Education, Koichi Hagiuda.

The topic on the agenda might sound like a small one: the recent approval of a middle school history book published by Yamakawa Publishers.

However, through 30 minutes of Q&A, the gender equality advocate and former Minister in Charge of Women’s Empowerment made it clear that the topic was far from trivial. It cut right into the core of the debate on comfort women, a euphemism for women who provided sex services to soldiers during the Second World War. The issue remains one of the key irritants in the bilateral distrust between Japan and South Korea.

Her questions elicited a surprisingly candid response from Minister Hagiuda, both on the topic of the textbooks and on the importance of hearing differing voices in the academic debate on the issue.  (Watch the Q&A in Japanese on YouTube, here.)

As relations continue to be tense between Japan and South Korea on this and other issues, we sat down with Haruko Arimura to ask what prompted her to choose this topic for her Q&A in the House of Councillors, what the future holds in the debate about comfort women, and what Japan’s next steps should be.


Why did you choose this subject for the Q&A?

The issue of comfort women can be one which is very difficult to approach. You have to brace yourself. It’s complicated, and one where left and right have a strong history of debate.

I think it’s important to reflect on what Japan should do vis-à-vis South Korea, but it’s also important that Japanese people develop an awareness about this issue.

I am not at all the type to close the lid on a subject just because it’s a difficult topic of discussion for Japan. If there’s something inappropriate, it is important to call it out. But if there are allegations which are not at all based on facts, and they are used as the basis to demean Japan, it’s the responsibility of the elected representatives to urge the government to set the record straight and bring the talk back to the facts.

Under the Shinzo Abe administration I was the first minister to become responsible for women’s empowerment.

I believe in social justice, and I, for one, have worked seriously toward achieving it.

Tell us more about what you hoped to achieve in this Q&A.

When I went to Malaysia, I visited the Japanese cemetery. There are these tombs of women, some of which are facing Japan and others of which are purposely facing away. According to the explanation of the embassy staff, it turns out that some of the women were sold, then taken overseas, where they became prostitutes. Among them, some held ill feelings. They were the ones sold away by their families, and they are the ones whose tombs are facing away.

The point is that one needs to understand that there were also Japanese comfort women, and not just women from Korea, China, the Philippines, or Taiwan. Although I don’t condone prostitution based on our modern values, at the time it was a legal and widely accepted social practice in many countries, including Japan. And the main backdrop was poverty. People needed to feed themselves. If we don’t make the best effort to understand the social context at the time, I don’t think we can understand the whole picture of the comfort women problem.

It’s very easy to look back from where we are now and say that at the time there was a human rights issue. Of course, now  definitely it would be. Even if we agree on this, it’s necessary to look plainly and clearly at what set of values people had at the time.

This is a problem which goes back to before 1945, and came to the center of debate only starting in the 1990s. I wanted to bring the discussion back to the facts underlying the debate.

In addition, I would like to look at who are the parties that gain if Japan-South Korea relations are bad, or, to put in another way, who stands to lose if the two countries’ relations improve.

Moreover, it’s important to ask the questions that everyone is wondering about, such as, since the start of the debate in the last 30 years, where is the evidence of “forceful taking away”?

That is the reason that I wanted to bring this up on the official record.

Regarding the issue of the middle school textbook, why do you think the controversial expression describing comfort women as juugun (従軍, accompanying the military) ianfu (慰安婦, comfort women) has crept back in the lexicon after 19 years of absence, and why is it a problem?

At the time [of WWII], there were several expressions which included those first two characters 従軍 (juugun), which literally means “accompanying the military.” There were the nurses, journalists, or even farmers, and the terminology implied the government’s official authorization and intention of having these professionals accompany the military. Importantly, there was no such expression regarding comfort women, because they were not under government direction.

Following the publication of a book in the 1970s, the term “juugun ianfu” (comfort women accompanying the military) was born, and as it became commonplace many assumed that the government was directly involved. However, in reality, with comfort women the situation was different.

Comfort stations were mainly operated by private brokers, whereas the military was often involved in guaranteeing the cleanliness and safety of the comfort stations that had been set up. It follows that the term “juugun” is not appropriate for comfort women.

However, in the Kono Statement, the wording reads “so-called military-accompanying comfort women.” As the government official admitted in my Q&A in March, the expression became widely used in the 1990s, and that is why it appears in the official statement.

Historically the basis of the misunderstanding is the failure to clearly differentiate between “juugun comfort women” and just “wartime comfort women.”

What I pointed out in the Q&A was the contradiction between the number two of the government, the Chief Cabinet Secretary who has publicly said that the government will not use the inappropriate terminology of “juugun”, while the Ministry of Education textbook review board says it’s okay to use it in a textbook.

The person who approves a textbook, even if they might be an expert on scholastic texts, they are not elected political leaders who have the authority to decide, or who have to face the responsibility of this international debate.

As long as the Japanese government doesn’t take a firm stance in clarifying between “juugun” comfort women and “wartime comfort women,” this misunderstanding will keep happening.

Why did you decide to bring up the academic thesis of Professor Mark Ramseyer?

From my understanding, Ramseyer’s paper uses a legal-economic approach to look at what contract stakeholders put together in the comfort stations.

Professor Ramseyer attempts to explain that comfort women were paid over a long period of up to three years. Although we can’t capture for how many this is the case, from his research it is clear that not all women were forced, and some women engaged in comfort services of their own volition. The fact that there were contracts suggests that the premise behind the arrangement was the will to find a suitable solution for both owners and comfort women.

Mark Ramseyer is not giving an evaluation as to whether comfort women are good or bad, ethical or not. But as a consequence of his thesis, I hear that Ramseyer has been criticized, including the allegation that his analysis constituted discrimination against women. I have no affiliation with Professor Ramseyer and I don’t know him personally, but I imagine this must have been a difficult time.

At any rate, this is a paper which has passed a peer review. I think it’s important for people to debate, regardless of their standpoint, and it needs to happen in a safe space, the field of exchange of different ideas and perspectives, where people can freely express their views without threat or intimidation.

What message will you pursue after this?

There has been a lot of talk of compensation, for example. But despite the 2015 agreement between Japan and South Korea in which both sides pledged they had resolved the issue “finally and irreversibly,” and Japan pledged to contribute ￥1 billion yen (approximately $8.3 million USD at the time) to set up a foundation under the South Korean government to support the living victims. In the end the relations between the two countries didn’t improve because there was a unilateral breaking of promises. I would like to bring attention to that.

In addition, regarding the evidence on “forceful taking away” of comfort women, while it was widely believed at the time of the Kono Statement in 1993, there was not a shred of evidence found in Japan or in South Korea of “forceful taking away” of comfort women having taken place. Seventy-five years since the end of the war and 28 years have passed since the Kono Statement, which sparked the beginning of the debate [internationally], and there is still no evidence in Japan, no evidence even in South Korea.

If it were to become clear to everyone that there is no evidence of “forceful taking away,” then going forward we might be able to face history with a calm fact-based approach, rather than in an emotional and provocative way, which is harmful for both countries.

Watch Haruko Arimura's Q&A with Minister of Education Koichi Hagiuda in the Upper House of the National Diet at this link.