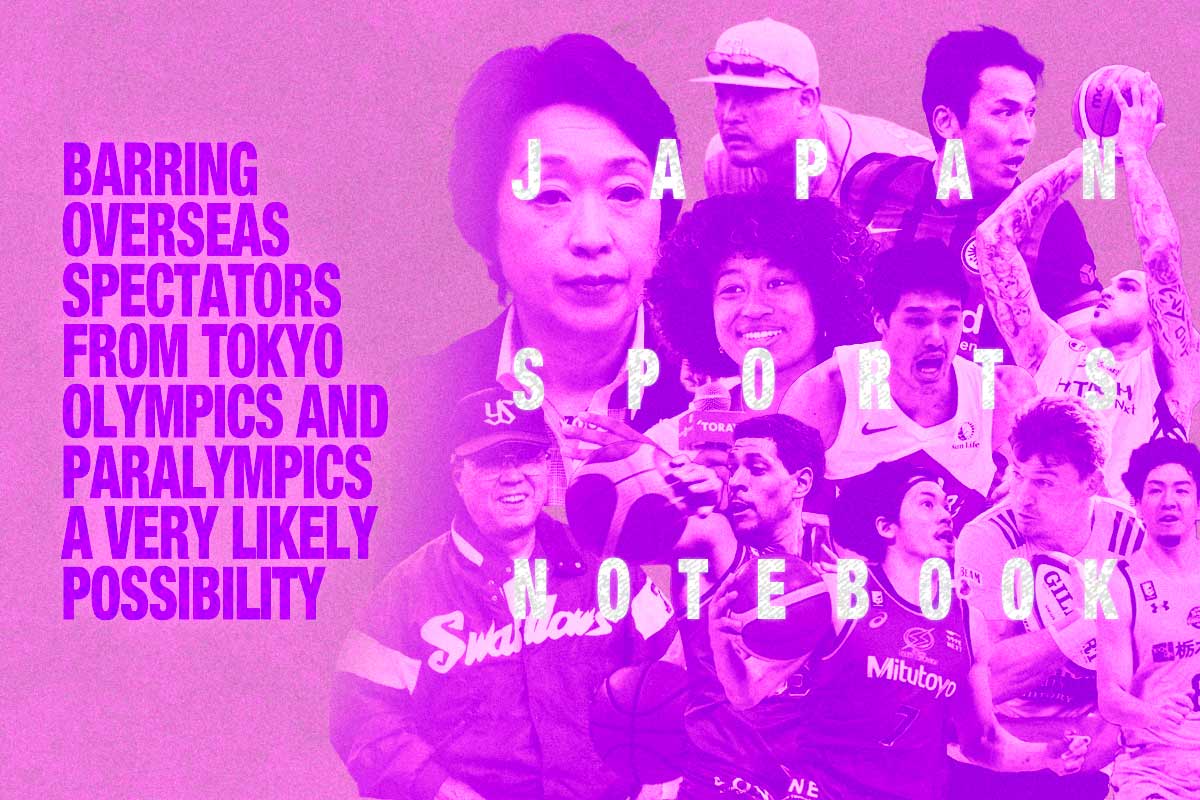 Don’t expect overseas fans to be permitted to attend the delayed Tokyo Olympics and Paralympics this summer.

That’s the message circulating throughout the sports world over the past several days as the continued challenge of staging a global event during the COVID-19 pandemic creates a never-ending series of logistical and health-safety concerns.

An official announcement is likely to be made before the end of the month.

New Tokyo 2020 Committee President Seiko Hashimoto, who was appointed to her current position last month, has targeted making an announcement before March 25, when the Olympic Torch Relay will begin in Fukushima Prefecture.

Tokyo 2020 reiterated that position in a statement issued this week.

“The decision regarding allowing spectators from overseas to attend the Tokyo 2020 Games will be made by the end of March based on factors including the state of infections in Japan and other countries,” Tokyo 2020 said in a statement widely circulated in the media on Tuesday, March

In Japan, fears of a huge spike in COVID-19 cases is central to the school of thought that foreigners should not be allowed to attend the Tokyo Games.

“In the current situation it is impossible to bring in foreign spectators,” The Mainichi Shimbun reported, quoting an unnamed government source.

Meanwhile, not all International Olympic Committee members are thrilled about the likelihood of barring all overseas fans from visiting Japan for the Olympics, which is set to begin on July 23.

“We must find ways to deal with people who have booked and paid for their airplane tickets, games tickets and accommodation and who now may not be able to travel to Tokyo,” Capralos said during an online IOC session on Thursday, March 11, according to The Associated Press.

Tokyo 2020 organizers had expected to make $800 million USD (about ¥87.2 billion JPY from ticket sales. This figure is for 7.8 million tickets, according to published reports. The AP noted that a total of 4.45 million tickets have already been sold in Japan, meaning roughly 30% of the tickets were for overseas customers.

Refunding customers for millions of tickets is far from a rosy public-relations issue.

Tokyo 2020 CEO Toshiro Muto acknowledged the difficulty of the matter this week.

“The situation is challenging in Japan and in other countries with regard to the spread of the infection,” Muto commented in the IOC session, according to several published reports. “Whether we can accept overseas spectators will require an extremely careful and vigilant decision.”

Rays’ Tsutsugo Getting Some Chances to Play First Base This Spring

In his first MLB season, Yoshitomo Tsutsugo played third base, left field and designated hitter for the Tampa Bay Rays.

This spring, he’s had the opportunity to play first base a few times already.

On Wednesday, March 10, he made his second Grapefruit League start in a spring training game against the Minnesota Twins in Port Charlotte, Florida.

For Tsutsugo, his appearances as a first baseman were his first two starts there since 2014.

“It’s not that I haven’t played the position before, and I’m getting early work as well,” Tsutsugo was quoted as saying through an interpreter, according to the Tampa Bay Times. “As long as I get more opportunities to play the position, I’ll feel more comfortable.”

Tsutsugo, who made his NPB debut with the Yokohama BayStars in 2010, had eight home runs and 24 RBIs in 51 games last season while batting .197.

Ji-Man Choi is the team’s regular first baseman. Like Tsutsugo, the South Korean is a left-handed batter.

Rays manager Kevin Cash, who guided the club to a World Series runner-up finish last season, recognizes that Tsutsugo could be a key at first base if Choi sustains an injury.

“Yoshi’s pretty important,” Cash was quoted as saying by the Tampa Bay Times. “If something were to happen to Ji, like we just saw the other day, he tweaks his knee for two days [and] we’re facing a string of righties where we want to get Yoshi’s bat in there.”

The Tokyo Yakult Swallows will honor former manager Katsuya Nomura during their March 28 game against the Hanshin Tigers at Jingu Stadium.

The Swallows made the announcement on Tuesday, March 9.

As part of the activities planned to recognize Nomura, Swallows players, coaches and other team personnel will wear No. 73, Nomura’s former jersey number, that day.

The Swallows had planned to honor Nomura in an exhibition game last March, but it was pushed back because of COVID-19 restrictions.

Balance scoring carried the Kawasaki Brave Thunders to a 76-60 victory over the Utsunomiya Brex in the 96th All-Japan Men’s Basketball Championship on Saturday afternoon, March 13 at Saitama Super Arena.

Kawasaki claimed the title in the national tournament, which is also known as the Emperor’s Cup, for the first time in seven years and for the fourth time overall.

Backup small forward Keisuke Masuda paced the Brave Thunders with 13 points, including 3 of 4 from 3-point range. He added two rebounds, three assists and two steals in 20-plus productive minutes. The 23-year-old is averaging 5.0 points in 42 regular-season games in the B. League.

After the game, Masuda spoke during the hero interview about his primary focus on offense. “Come out and shoot aggressively,” he said.

The Brave Thunders led 41-34 at halftime and extended their advantage to 58-48 by the end of the third quarter.

For long stretches of the title game, the Brave Thunders relied on a big lineup with the 207-cm Fazekas, 203-cm Aguilar and 208-cm Heath on the court at the same time, which created mismatches problems for the Brex at both ends of the floor.

In Friday’s semifinals, Utsunomiya topped the Alvark 64-54, and the Brave Thunders beat the SeaHorses Mikawa 79-67. Heath had a 26-point, 11-point performance in the semifinals.

Along with Heath, Fujii, Aguilar, Rossiter and Hiejima were also named to the tournament’s Best Five team.

Third-year pro Yuta Watanabe’s move to the Toronto Raptors this season has helped his No. 18 jersey and the team’s apparel climb to the top of the NBA’s Most Popular Jersey and Team Merchandise lists, according to a news release issued on Wednesday, March 10.

The sales figures are based on NBAStore.jp retail activity since the 2020-21 NBA season tipped off in December.

Other top-five teams in merchandise sales are the Brooklyn Nets at No. 2, followed by the Lakers, Warriors and Wizards.

Retired former NBA and B. League center Robert Sacre has joined the Fraser Valley Bandits of the Canadian Elite Basketball League (CEBL) as an assistant general manager, the team announced on Thursday March 11.

Born in Louisiana, Sacre grew up in North Vancouver, British Columbia. Thus his new job is a homecoming of sorts.

“I’m grateful for the chance to reconnect with my roots in British Columbia and to help grow the game by recruiting top-tier players to the Bandits. Our province’s basketball history runs deep and I was fortunate to play for some special teams and coaches as part of my journey that led me to Gonzaga, the NBA and Japan,” said Sacre, who also played for the Lakers.

In Sacre’s two-and-a-half seasons with the Sunrockers, he left an indelible mark on the team, according to Ryota Matsuoka, Shibuya’s assistant manager of basketball operations.

“During Rob’s time with us, his contributions to our team went beyond his on-court performance,” Matsuoka said. “He was the first one on the floor and wanted to work harder than everyone in order to set an example. He was vocal in our locker room and was strong when it came to communication with local Japanese players and served as a mentor for the younger players on our team.”

The CEBL season tips off in early June.

Hasebe, a former Japan national team captain, joined Frankfurt in 2014. He has been with the club longer than any other player on its roster.

“Almost a year ago, I thought that I would retire this coming summer. But this season has shown that I’m still in good shape, which is why I changed my mind. I’m delighted to be playing for Eintracht for another year,” Hasebe told the team’s website.

The reigning J. League champions are off to a splendid start, with Kawasaki Frontale enjoying their fourth consecutive triumph to open the 2021 season on Wednesday, March 10.

Forward Leandro Damiao, who hails from Brazil, found the back of the net twice in a 2-0 home victory over Tokushima Vortis, who competed in J2 last season.

For the 31-year-old striker, it marked his second straight match with a brace.

Against Vortis, both of Damiao’s goals came in the first half, with the opening goal occuring in the 12th minute.

Damiao credited teammate Kaoru Mitoma for his opportunistic defense, which led to the second scoring opportunity for the Brazilian.

“We did that a lot last year, too. Our style is to push forward aggressively and with good work from Kaoru, that paid off again,” Damiao was quoted as saying by Kyodo News.

Last season, Damiao’s second with Frontale, he had 13 goals in 34 matches.

Okubo, now 38, is in fine form to open the season, with five goals in five matches.

In 2020, he had no goals for Tokyo Verdy, a J. League second-division squad.

This time, the 23-year-old native of Ikeda, Gifu Prefecture, amassed 80.31 points and outperformed Canada’s Brenden Kelly in the third-place playoff.

Canadian Mikael Kingsbury, the defending Olympic champion in the moguls, claimed the dual moguls gold with 80.51 points, while Australia’s Matt Graham was second. He also won the event at worlds in 2019. The “King of Moguls,” Kingsbury also defended his moguls crown. By doing so, he became the first man to repeat in both events.

The 24-year-old reached a career-best No. 280 in the WTA rankings in May 2018. She competed on the International Tennis Federation circuit and in WTA events after turning pro in 2012. Osaka didn’t win any singles or doubles titles.

Currently ranked No. 335 in the world, Osaka posted her retirement announcement on Instagram.

“It was a journey which I didn’t enjoy ultimately but I’m grateful for all the memories and support I’ve gained and received over the years from the sport,” she wrote. “I’m moving on now so you can look forward to new fun projects upcoming in the future.”

Beauden Barrett, a two-time World Rugby Player of the Year, is enjoying a productive start to the new Japan Rugby Top League season.

Barrett booted 10 conversions and scored a try for Suntory Sungoliath in a 75-10 rout of the Munakata Sanix Blues on March 6 in Kofu, Yamanashi Prefecture.

With the win, Suntory improved to 3-0 in league play.

The 29-year-old Barrett, who competed for the New Zealand All Blacks at the 2019 Rugby World Cup in Japan, is in his first season with Suntory.

In his Top League debut, Barrett had a try and converted eight of nine conversions in Suntory’s 75-7 demolition of the Mitsubishi Sagamihara Dynaboars 75-7 on February 21.

“Today, just 10 years have passed since the Fukushima Earthquake. A day that Japanese people should never forget. I won’t forget my gratitude for being able to play basketball normally and living normally. #3.11.”

―Chiba Lotte Marines pitcher Roki Sasaki, 19, after appearing in his first NPB spring outing on March 12 against the Chunichi Dragons at Chiba’s Zozo Marine Stadium. Sasaki worked a 1-2-3 sixth inning and fanned one batter in his pro debut. A former prep standout at Ofunato High School in Iwate Prefecture, Sasaki lost his father and other relatives in the Great East Japan Earthquake.