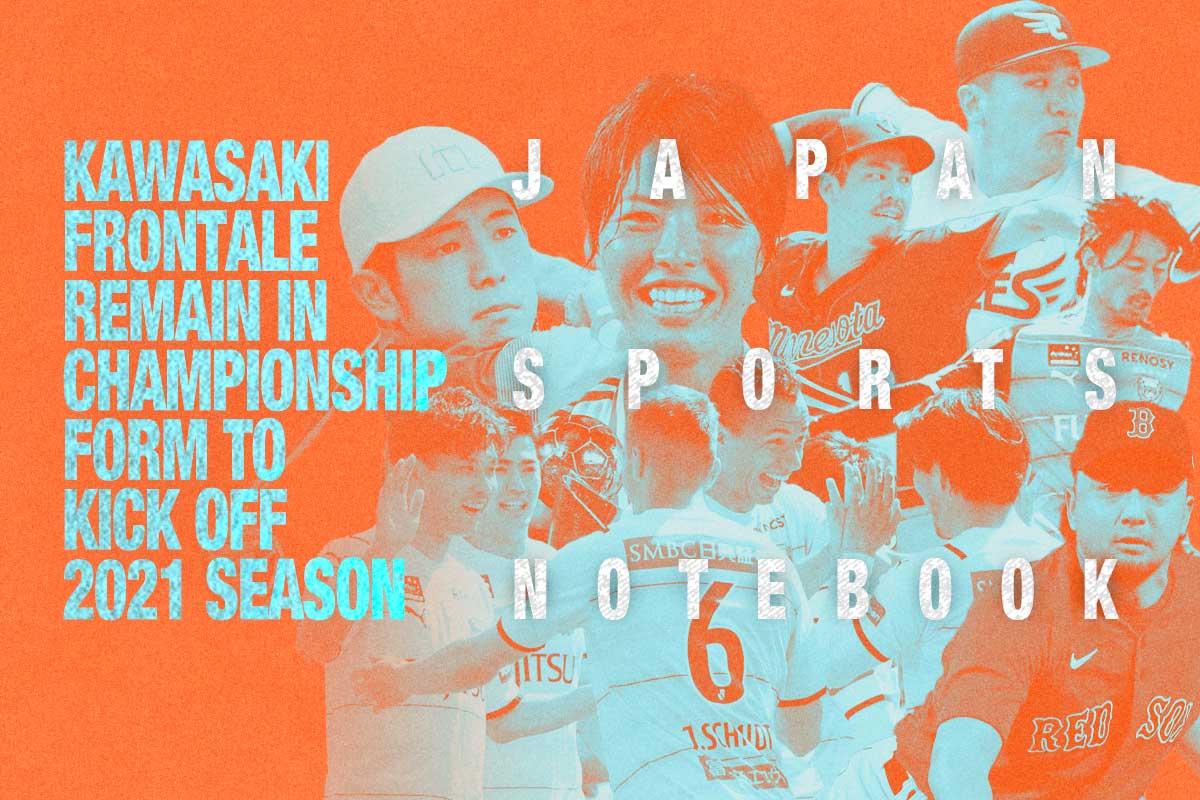 Kawasaki Frontale enjoyed the thrill of capturing the J. League title last season, then set the ambitious goal of repeating that feat in the 2021 campaign.

No other team has knocked Frontale off their throne yet.

There is one remaining unbeaten team in the J. League first division.

This year, the top flight has 20 teams, including two new additions, Tokushima Vortis and Avispa Fukuoka, both of whom previously played in the second division, aka J2. (In past years, J1 had 18 teams.)

Above all, Kawasaki's recipe for success this season starts with its potent scoring attack. Frontale led J1 with 30 goals through Friday, April 23, with 10 more goals than Yokohama F. Marinos, the No. 2 club in that category.

Frontale's spread-the-wealth offense is a big part of their success story.

Leandro Damiao is first with seven goals, tied for third in J1. Akihiro Ienaga has six goals, Yu Kobayashi and Kaoru Mitoma have four apiece and Daiya Tono has three.

Nadeshiko Japan captain Saki Kumagai, who has enjoyed past success with the national team and a joyride with Olympique Lyonnais, said this week this is her final season with the French powerhouse.

Kumagai broke the news on Instagram on Tuesday, April 20.

"It was not an easy decision but I'm really looking forward to the new challenges ahead," the 30-year-old, who played on Japan's 2011 Women's World Cup-winning squad, wrote on the social media platform.

Kumagai also helped set the tone for Japan at the 2015 WWC and at the 2012 London Games. Nadeshiko Japan placed second in both events.

The veteran defender is considered a likely candidate to play for Nadeshiko Japan at the Tokyo Olympics.

The other 12 men's national teams competing at the Olympics will be assigned to the following groups:

On the women's side, 12 sides will be paired into three groups.

Suzuki Confirms Commitment to MotoGP through 2026

Suzuki finalized a plan to remain in MotoGP through 2026. The signed paperwork confirms the defending champion's involvement in the circuit from 2022-26.

"An agreement has been signed with series promoter Dorna to renew their involvement in the MotoGP World Championship for the period ranging from the 2022 season to the 2026 season,” Suzuki and Dorna announced in a statement, according to Agence France-Presse.

In other news this week, Formula One and Suzuka Circuit finalized a three-year contract extension for the Japanese Grand Prix.

As a result, the race will be held at the Mie Prefecture venue until 2024 per the new contract.

Nakajima Climbs to No. 1 in Amateur Rankings

Keita Nakajima is the latest Japanese men's golfer to reach No. 1 on the World Amateur Golf Ranking list.

The current rankings were unveiled on Wednesday, April 21.

In reaching No. 1, Nakajima finished in the top 10 in three consecutive tournaments on the Japan Golf Tour, including a runner-up spot in the Token Homemate Cup on April 18. He placed tied for eighth in the Dunlop Phoenix event and was third at the Mitsui Sumitomo Visa Taiheiyo Masters.

Nakajima, 20, climbed 10 spots in the rankings.

Who are the other Japanese to previously be ranked No. 1?

In 2010, Hideki Matsuyama, the 2021 Masters champion, was No. 1 on the World Amateur Golf Ranking chart. Takumi Kanaya, now a pro, held the top spot last year.

A week after making his first start in Japan since 2013, Masahiro Tanaka earned victory No. 100 of his NPB career on Saturday, April 24 in Sendai.

It was Tanaka's first pitching appearance at the Eagles' home ballpark since Game 7 of the 2013 Japan Series, which Rakuten won.

"I'm home," Tanaka expressed in an on-field interview after the game, which could be heard throughout the ballpark courtesy of high-powered microphones. "It feels a little strange, but I'm extremely happy."

In Tanaka's first regular-season game of 2021, he took the loss on April 17, allowing three runs and four hits in five innings against the Hokkaido Nippon Ham Fighters at Tokyo Dome.

Boston Red Sox reliever Hirokazu Sawamura entered the game in a high-pressure situation on Friday, April 23 at Fenway Park in the opener of a weekend series against the Seattle Mariners. Boston entered the game as the American League East's first-place team, while Seattle was tied for first in the AL West.

With two outs and two men on base in the fourth inning and the hosts ahead 3-2, Sawamura was called upon to replace Boston starter Martin Perez.

The former Yomiuri Giants pitcher, who joined the Red Sox in the offseason, then held the Mariners without a run in the fifth. He struck out three in his quality relief appearance.

"I'm glad the team won," Sawamura told reporters. "I'm happy [about my first win] and I might revel in it until around midnight, but after that, it's another day."

Mariners lefty Yusei Kikuchi (0-1), who made his fourth start of the season, gave up five runs in 4 1/3 innings.

Shohei Ohtani smacked a solo home run in the third inning on April 21 to reach the career century mark. It was his fifth round-tripper of the season.

Ohtani hit his first career homer in 2013 for the Hokkaido Nippon Ham Fighters.

After the game, he was asked if any of his homers to date are most special to him, Kyodo News reported.

"Both first homers [in Japan and the U.S.] are memorable," Ohtani told reporters. They're both special."

A day earlier, Ohtani had a shaky outing on the pitching mound, working four innings of one-hit, no-run ball. He struck out seven and walked six in the Angels' 6-2 win over the Rangers. Reliever Griffin Canning, who replaced Ohtani, picked up the win.

Kenta Maeda was not at the top of his game on Wednesday, April 21.

The Oakland Athletics pounced on the Minnesota Twins starter's pitches early and often in a 13-12 slugfest. He surrendered seven runs and eight hits and left after three innings. Maeda allowed three home runs.

The hosts prevailed 13-12 in 10 innings at Oakland Coliseum. It was their 11th consecutive victory.

For Maeda, the eight runs matched the highest number he's given up in his pro career, which began in 2008 with the Hiroshima Carp. He got a no-decision in Minnesota's extra-innings defeat.

Oakland led 7-4 when Maeda departed from the game.

"I threw too many off-speed pitches down the middle and hitters took advantage of that," Maeda was quoted as saying by Kyodo News after the game.

"I've had some disappointing pitching performances recently, so I hope I can shift gears and bounce back strong in my next start."

The Orix Buffaloes provides NPB fans with perhaps the week's most exciting ending, delivering late-game drama to pull off a 7-6 victory against the Seibu Lions on Thursday, April 22.

The Buffaloes trailed 6-3 after eight innings at Kyocera Dome in Osaka.

Moments earlier, the Lions' Aito Takeda clubbed a three-run double to put the Buffaloes in an apparent difficult spot. But Orix manager Satoshi Nakajima's club rose to the occasion.

With two outs in the ninth, Takahiro Okada produced the first of two game-defining hits for the Buffaloes, hammering a bases-loaded double off the right-field wall on a 2-2 offering from Tatushi Masuda. That tied it up at 6-6.

The Lions closer failed to quell the rally.

Yutaro Sugimoto followed with a sayonara single beyond the reach of Seibu shortstop Sosuke Genda, sending Okada home for the winning run.

As a result, Orix completed a series sweep against its Pacific League rival.

Nagoya edged Ryukyu 87-85 in the new venue in Okinawa City before an announced crowd of 3,521.

Construction began in 2018 for the 10,000-seat gym and the finishing touches were put on the project in March.

Okinawa Arena is one of the venues set to be used in the 2023 FIBA World Cup, which will be held August 25-September 10. The Philippines and Indonesia are the other co-hosts of the global tournament. Matches will be held in Okinawa City during the event's group phase.

The 28-year-old Nash, an Oklahoma State alum, began his pro career in 2015 with the Fukushima Firebonds.

He scored a season-high 37 points on March 24 against the Firebonds.

Rafael Nadal excelled in the first and third sets against Kei Nishikori in the men's singles third round at the Barcelona Open on Thursday, April 22.

Entering this year's tournament, Nadal had 11 Barcelona Open titles on his résumé.

Now he also owns a 12-2 overall head-to-head record against Nishikori, who's ranked 39th in the world.

After the victory, the Spaniard assessed his performance: “I think I played much better than yesterday; that’s a very important thing for me.

"The level of positive energy was higher, so I'm very satisfied.”

Nishikori was disappointed by the result.

"I wasn't able to win all the key points," Nishikori, who won the tournament in 2014 and 2015, was quoted as saying by Kyodo News.

"I don't understand why I can't play well consistently and it's frustrating. I have to put together at least two sets of top-level tennis in a match."

Daichi Suzuki, who captured the gold medal in the men's 100-meter breaststroke at the 1988 Seoul Olympics, will be inducted into the International Swimming Hall of Fame in Florida in October.

Suzuki, former head of the Japan Sports Agency (now led by Koji Murofushi), is one of five aquatic greats who'll comprise the honors swimmers portion of the ISHOF's Class of 2021.

The others: Australia's Michael Klim and Jon Sieben, and American standouts Brendan Hansen and Rebecca Soni. Other categories in the Hall of Fame ceremony honor distinguished coaches, divers, etc.

Originally, Suzuki and others were to be inducted in April 2020, but the global pandemic forced the ISHOF to postpone the festivities.

For Murata, a TBA foe in the early summer would give him a litmus test in the run-up to a potential high-profile bout against IBF champ Gennady Golovkin (41-1-1, 36 knockouts) on New Year's Eve.

"Prior to the pandemic I said there's no way the [Tokyo] Olympics can go ahead because history told us there was no way they could. And now I'm saying I don't know, I wonder if they can again. This decision needs to be made by medical and health experts, not by corporate and big business."

ーHayley Wickenheiser, who played in six Olympics for Canada's women's ice hockey team, in an interview with the Canadian Broadcasting Corporation.


"It's his first big league experience. And I think little by little, you can see him gaining confidence. ... That was a huge part of the game right there. We needed that and he did an amazing job."