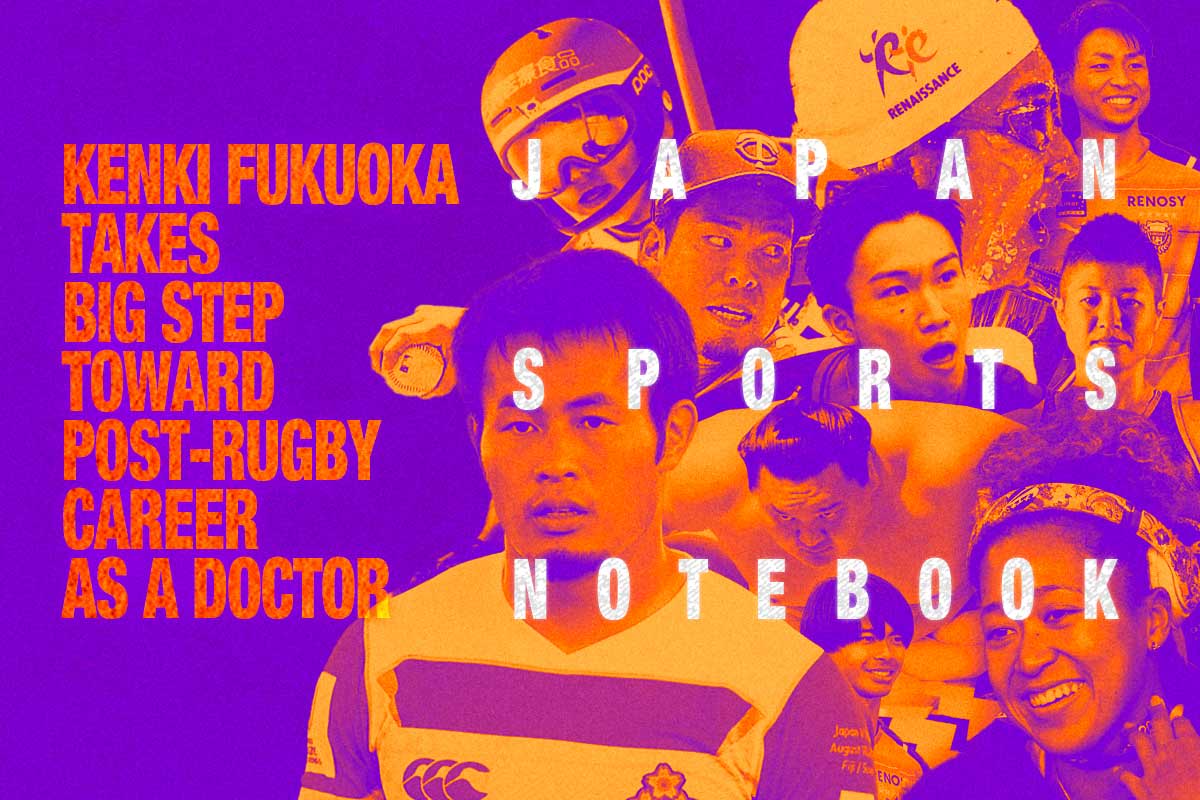 Kenki Fukuoka was an integral part of Japan's successful run to the 2019 Rugby World Cup quarterfinals. The popular player's speed added an element of excitement to the Brave Blossoms matches.

Last weekend, the veteran wing, who has played for the Japan Rugby Top League's Panasonic Wild Knights since 2016, confirmed the next step in his previously announced plan to pursue a career as a physician. He has passed the entrance exam for Tokyo's Juntendo University School of Medicine.

He tweeted the news on the same day Panasonic pounded the Ricoh Black Rams 55-14 in the teams' season opener on Saturday, February 20.

“I could achieve this thanks to help from so many people,” tweeted Fukuoka, who scored a try in the rout and had an eye-opening 25 tries in 37 tests for Japan.

Fukuoka, whose father is a dentist, will retire from rugby after the current season.

Mariners President/CEO Resigns After a Slew of Insulting Comments

Seattle Mariners CEO/President Kevin Mather resigned on Monday, February 22, one day after issuing an apology following the release of a leaked video on Twitter in which he insulted several people within the organization.

Mather's inflammatory remarks included criticism of the English-language ability of special assignment coach Hisashi Iwakuma and one of the team's top Dominican prospects.

“Wonderful human being — his English was terrible," Mather said of Iwakuma. "He wanted to get back into the game, he came to us, we quite frankly want him as our Asian scout/interpreter, what’s going on with the Japanese league. He’s coming to spring training. And I’m going to say, I’m tired of paying his interpreter. When he was a player, we’d pay Iwakuma ‘X,’ but we’d also have to pay $75,000 a year to have an interpreter with him. His English suddenly got better. His English got better when we told him that.”

“We condemn Kevin Mather’s offensive and disrespectful comments about several players," read the statement. "We are proud of the international players who have made baseball better through their outstanding examples of courage and determination, and our global game is far better because of their contributions. His misguided remarks do not represent the values of our game and have no place in our sport."

Kikuchi only threw strikes on 51% of his pitches and 50.5% of the time on first pitches last season, The Seattle Times reported last weekend.

In the offseason, the 29-year-old Kikuchi spent time thinking about how he can improve as a player in 2021.

“I worked on the mental side of the game,” he was quoted as saying by The Seattle Times. “If I were to just have confidence in all my pitches, being able to throw all my pitches in any count. Command often leads to confidence. That was my main focus.”

While his overall pitching production wasn't great in his first two MLB seasons ― Kikuchi went 6-11 and made 32 starts in 2019 ― he made strides last year in terms of pitching velocity.

But his struggles with control produced frustrating results.

"When Kikuchi did throw strikes, opposing hitters were 10% less likely to make contact than the year before," Ryan Divish of The Seattle Times wrote. "But he didn’t throw enough strikes and not enough quality strikes for real success."

Kikuchi acknowledged he didn't have an effective season.

“Last year, there were many major adjustments,” Kikuchi, who signed a four-year contract with the club in 2019, told the newspaper. “I was just trying to attack each hitter. I’m just trying to be aggressive.”

Pitcher Takeshi Yasuda, who spent his entire NPB career with the Yakult Swallows (1972-81), died of stomach cancer at his home in Tokyo on February 20. He was 73.

Yasuda won 15 games and helped the Swallows win the 1978 Central League pennant. Then, in the Japan Series, a seven-game encounter with the Hankyu Braves, the Swallows won their first title. He had a career-high 17 wins in 1977. He had five seasons with 10 or more wins.

His left-handed side-arm style was dubbed "Penguin Pitching" during his career. A three-time All-Star, Yasuda set an NPB record by throwing 81 consecutive innings without issuing a walk in 1973.

The Kitakyushu native served as a Swallows coach and official scorer after his playing days.

Ikee Decides to Compete at Nationals

After completing the non-Olympic-event race in 25.77 seconds, Ikee revealed that she's planning to compete at the national championships which will be held April 2-10 at the Tokyo Aquatics Centre.

"It's really pleasing to come first regardless of what tournament you're competing in," Ikee told reporters at Tatsumi International Swimming Center.

She added: "It hasn't sunk in yet, but I feel I'm gradually getting my form. I wasn't really thinking I'd get below 26 seconds, so I was surprised and also pleased."

Ikee has said she's aiming to compete in the 2024 Paris Olympics, but it's the notion here that a strong showing at nationals could convince her to alter her plans, e.g. don a swimsuit at the Tokyo Games this summer.

"I can't say that I'm aiming for it [the Tokyo Olympics] now," Ikee was quoted as saying by Reuters last weekend. "When we start to get results that are world-class, we will think about it at that time."

With the goal of repeating as J. League champions on the horizon, Kawasaki Frontale entered the new season with a positive jolt of momentum by winning the Fuji Xerox Super Cup 3-2 over Gamba Osaka on Saturday, February 20.

The match was decided in dramatic fashion, with Yu Kobayashi delivering the winning tally in the 96th minute at Saitama Stadium.

Kobayashi praised teammate Daiya Tono for his pinpoint pass into the area to set up the goal.

"Daiya played the ball to me perfectly. It was right on course," Kobayashi said, according to Kyodo News.

Kaoru Mitoma had two first-half goals for Frontale in the league's traditional curtain-raiser.

In the second half, Shinya Yajima and Patric, who converted a penalty, evened the score for Gamba, last year's J. League runners-up.

In related news, Frontale downed Yokohama F. Marinos 2-0 on Friday, February 26 at Todoroki Stadium in the first official game of the new season for both teams.

Akihiro Ienaga bagged a pair of goals in the first half.

The defending champion, Maren Lundy of Norway, was the runner-up. She jumped 102.5 and 99.5 meters in succession for 276.5 points.

Takanashi, who collected her all-time record 60th World Cup win on Friday, February 19, in Rasnov, Romania, finished with 276.3 points. She traveled 100 meters on her first attempt and 96 meters on her second.

"I don't know how to explain my emotions," Takanashi said, reacting to the results, according to Kyodo News.

"The wind conditions kept changing greatly and anyone could have won, but I think I was able to put my best self out there," added Takanashi, who’s preparing for the largest hill event at worlds on March 3.

Asa Ando recorded the best-ever finish by a Japanese woman in the slalom competition at the FIS Alpine World Ski Championships on Saturday, February 20 in Cortina d'Ampezzo, Italy.

Ando, a 2018 Olympian, was 10th in a performance that moved her ahead of Emiko Okazaki, who placed 13th in the slalom at the 1972 Sapporo Olympics, which also served as the world championships that year.

"I'm overjoyed and shocked," Ando told reporters. "I was careful not to time my turns too early. I could run relatively calm for the first one, the second I can't recall."

Austria's Katharina Liensberger claimed the title in 1:39.50 after previously winning the parallel giant slalom at worlds.

Atsushi Miyagi, who teamed up with Kosei Kamo to win the men's doubles title at the 1955 U.S. National Championships (now known as the U.S. Open), died on February 24 in Tokyo, his hometown. Miyagi, who had bladder cancer, was 89.

The Miyagi-Kamo title represents the only Grand Slam title captured by Japanese men since the end of World War II.

Miyagi also achieved success in his homeland, with four singles and four doubles titles at the All-Japan Tennis Championships in 1954, 1955, 1957 and 1960, as well as another title in mixed doubles.

In later years, Miyagi served as a managing director for the Japan Tennis Association and was a Japanese Olympic Committee director. A Waseda University professor, he worked as manager of the school's tennis team.

The Robert Morris University women's basketball team held a Virtual Senior Day to honor its five senior players, including guard Honoka Ikematsu, on February 14. Each player was introduced by the video announcer, photographs were displayed of them with family members and game highlights of their career were shown in the short video.

The Colonials won three consecutive Northeast Conference regular-season titles in Ikematsu's first three seasons at the school, and advanced to the NCAA Women's Tournament in 2019. This season, the school's first in the Horizon League, the Colonials, went 4-13 and exited the first round of the conference tournament on February 25. The ninth-seeded Colonials fell to No. 8 Northern Kentucky, 68-54.

The 5-foot-6 (167.6-cm) Ikematsu, a psychology major who hails from Kumamoto, earned All-NEC Rookie honors in the 2017-18 season. She scored a career-high 25 points, including seven 3-pointers, on December 31, 2017, at Sacred Heart in Fairfield, Connecticut.

Men's badminton world No. 1 Kento Momota is one of six nominees for the Laureus World Comeback of the Year Award, it was announced on Wednesday, February 24. Momota was seriously injured in an automobile accident in January 2020 in Malaysia. He returned to form by winning the All-Japan National Championships in late December.

The 22nd annual Laureus World Sports Awards extravaganza is scheduled to be a virtual event in May. ...


Fujioka Recognized as One of World's Top Female Boxers

Ring City USA, which publishes a boxing newsletter, began its most recent dispatch this week with a ranking of the Top 12 Female Prizefighters pound for pound in the world.

"[She] has been her country’s greatest female fighter and has grabbed world titles in five weight divisions," columnist David A. Avila wrote of the 45-year-old. "Strength and a willingness to face anyone, anywhere have long been her assets." ...

Legendary runner Billy Mills, the men's 10,000-meter gold medalist at the 1964 Tokyo Olympics, participated in a Zoom talk on Thursday, February 25 with Jim Thorpe biographer Robert W. Wheeler and Nedra Darling, co-founder of Bright Path Strong, an organization "established to share and amplify authentic Native American voices and stories, past and present," according to its website.

The ASEAN League club made the announcement on February 25.

The 69-year-old Croatian is a two-time Euroleague winning coach. Several of Japan's current veteran stars and some recently retired standouts played under Pavlicevic at the 2006 FIBA World Basketball Championship.

"It is an honor to once again be nominated for a Laureus Award by the world's media. For me this is special because Laureus sees the big picture ― not just sport on the court or the pitch, but how it can help young people around the world. This is a time that sport can make a big difference in so many ways and really help to change the world."

―Naomi Osaka on her nomination for the Laureus World Sportswoman of the Year Award. The tennis star is one of six nominees. She won the Laureus Breakthrough Award in 2019.

"The great result last year, hopefully I can build off it going into this season. But during the offseason, I don't throw much. I'd rather concentrate on strengthening my body so hopefully I can go in strong and finish strong."

―Minnesota Twins pitcher Kenta Maeda, who went 6-1 in 2020 and was the American League Cy Young Award runner-up, on his outlook for the upcoming season.

"I didn't [think I'd get infected], honestly speaking. I was in good form so I was frustrated more than anyone else."