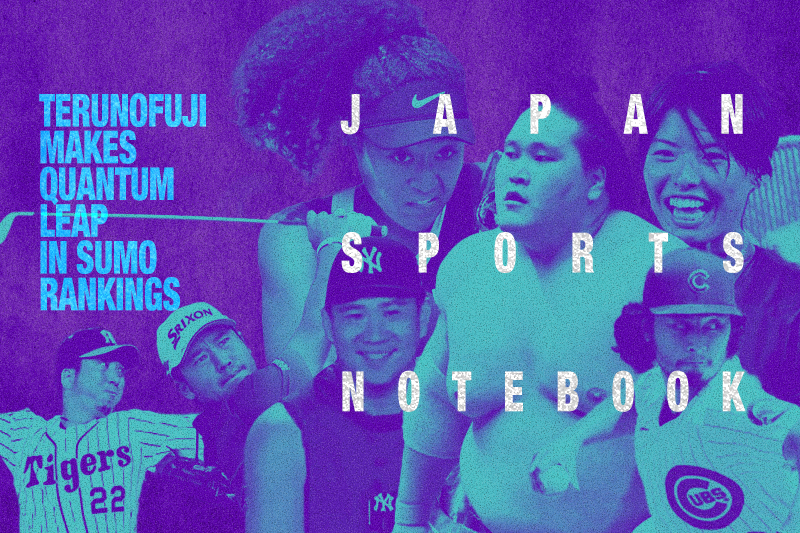 In the Japan Sumo Association's latest rankings, which were released on Monday, August 31, the former ozeki became a maegashira No. 1. And after capturing his second career Emperor's Cup crown on August 2, Terunofuji climbed 16 spots in the sport's pyramid. It was an epic leap from where he stood before the most recent tournament: as one of two No. 17 maegashira.

Therefore, Terunofuji awaits the Autumn Grand Sumo Tournament, which gets underway on September 13 at Ryogoku Kokukigan in Tokyo, with heightened expectations.

In addition to yokozuna rivals Hakuho and Kakuryu, Terunofuji will be in the spotlight when the tournament starts, and he recognizes the expectations that come with it.

"Since I'm drawing this much attention, I have to work really hard at the next tournament," Terunofuji was quoted as saying by Kyodo News.

A higher ranking puts Terunofuji to the test against tougher opponents—all from among the makuuchi (top) division—throughout the 15-day extravaganza.

"I'm responsible for that," he said of his performances, according to Kyodo. "I want to win as much as I can and not miss any chances.

"I'm just going to believe in what I've done and go for it." 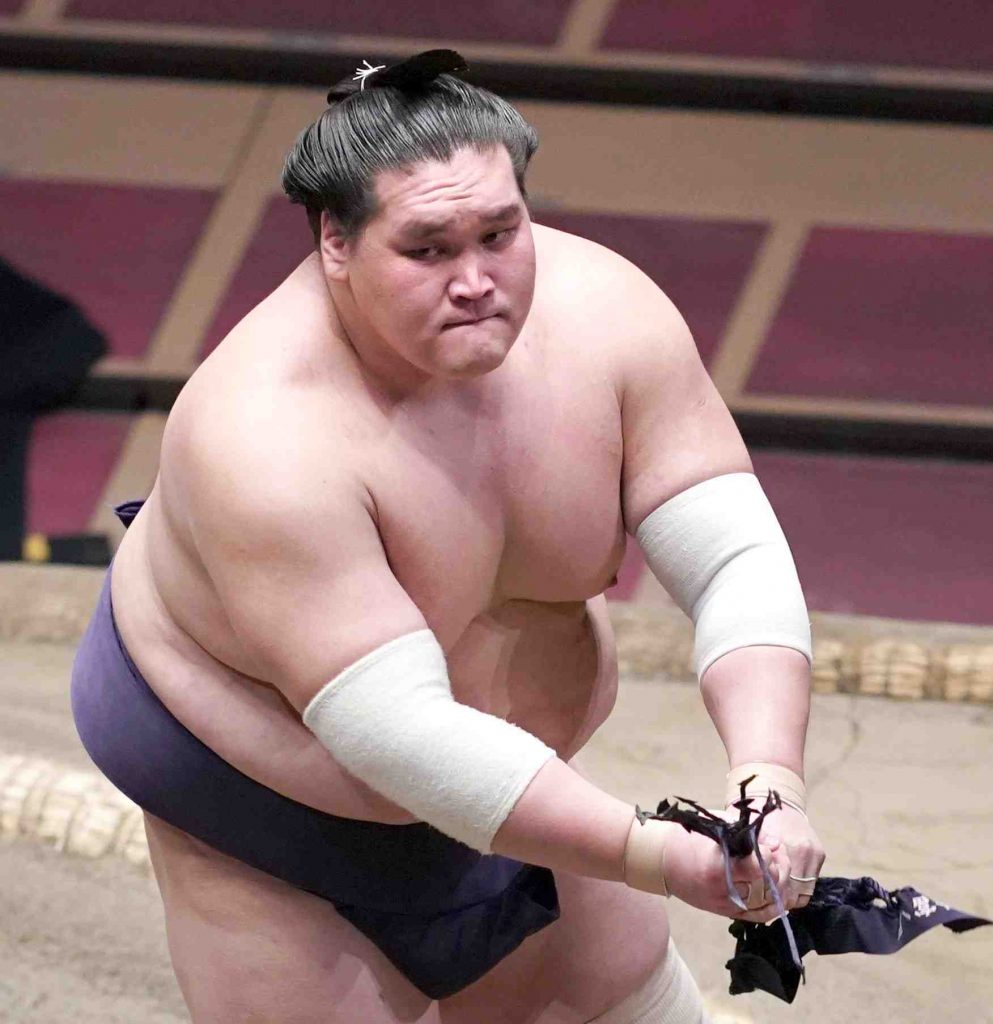 For Terunofuji, this is quite a career revival.

In winning his first title since 2015, the Isegahama stable wrestler also competed in the elite makuuchi division for the first time since the 2018 New York Grand Sumo Tournament. Since then, he’s dealt with knee injuries, a major setback to his career.

He plummeted in the rankings. Following the May 2018 Basho, he dropped out of the second-tier juryo division, and was sidelined for several months.

And where did his comeback begin? In the jonidan division, which is the next-to-lowest, at No. 48ーa far cry from his ozeki days—in the 2019 Spring Basho. 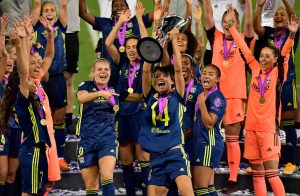 With two minutes remaining in the opening half, the veteran midfielder delivered a left-foot strike from the edge of the area to put Lyon in front 2-0, and Kumagai became the first Asian player to score a goal in the Women's Champions League final.

The French dynasty team defeated VfL Wolfsburg 3-1 for its fifth consecutive title (and seventh overall) in the marquee event. 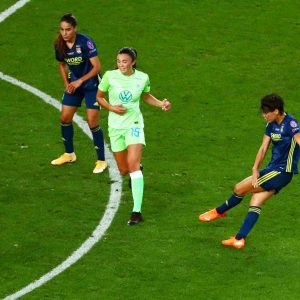 Saki Kumagai scores a goal in the first half of the Women's Champions League final. (Sergio Perez/Pool via REUTERS) 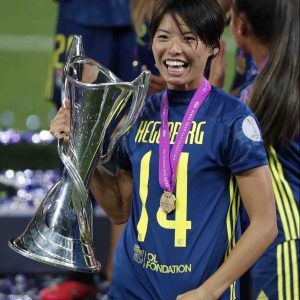 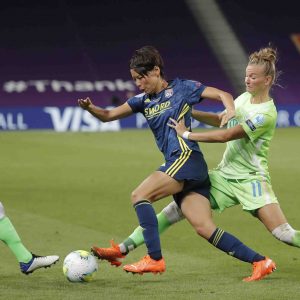 "Playing on this stage is a dream, and it means a lot to keep producing good results," Kumagai told reporters after the game.

Kumagai has enjoyed sustained success with Lyon since joining the club in 2013, winning the domestic league title in seven straight seasons.

Above all, the Sapporo native will remain a part of Japanese soccer lore for decades to come. After all, Kumagai scored the winning penalty for Nadeshiko Japan in the 2011 Women's World Cup final against the United States. 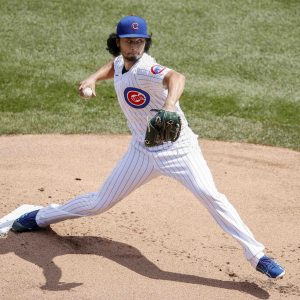 Chicago Cubs ace Yu Darvish was named the National League Pitcher of the Month for July and August, it was announced on Wednesday, September 2.

Darvish, who is 7-1 with a sparkling 1.44 ERA and 63 strikeouts, has won seven consecutive starts, the best stretch of his MLB career. He went 5-0 with a 1.09 ERA in August. He lead the majors in wins and is No. 1 in the National League in ERA.

"When you've got a guy pitching well over multiple weeks," Cubs manager David Ross said of Darvish, according to NBC Sports Chicago, "the day they start, you just really feel comfortable in that guy that you feel like is your stopper. ... Yu's been that guy that has been carrying that No. 1 spot for this organization since last year and continues to get more and more comfortable with who he is and what he wants to do."

New York Yankees hurler Masahiro Tanaka was the last Japanese starter to receive an MLB monthly pitching award. Tanaka was named the American League Pitcher of the Month for May 2014.

In his latest start, Darvish allowed one hit and one run in a 4-1 victory over the St. Louis Cardinals on Friday, September 4. The hit—a Matt Carpenter solo home run with no outs in the sixth inning at Wrigley Field—was Darvish's lone miscue of note. He struck out 11 batters in seven innings. Darvish retired the first 15 batters he faced in another dominating performance. 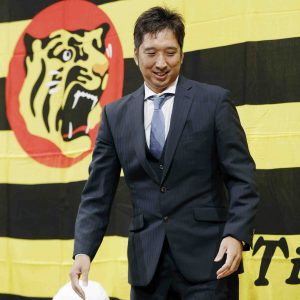 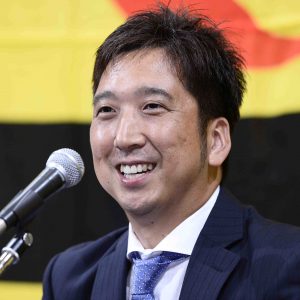 Hanshin Tigers relief pitcher Kyuji Fujikawa announced on Tuesday, September 1, that he will retire at the end of the season.

"I've always played with that feeling in mind," Fujikawa was quoted as saying by Kyodo News at a news conference. "I still have two months. I'm fired up and will give it my best." 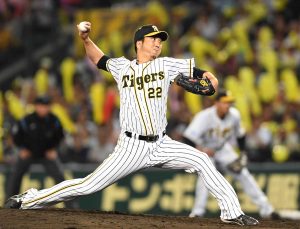 Through September 1, Fujikawa had 245 career saves.

The majority of his saves were recorded before he left Japan for the majors. Fujikawa, who made his NPB debut in 2000, notched 220 saves for the Tigers, including a career-best 46 in 2007 and 41 in 2011, before leaving the team after the 2012 season to play for the Cubs.

Masahiro Tanaka collected his first victory of the pandemic-shortened season on September 1.

Making his sixth start of the season, Tanaka (1-1) worked six innings in the New York Yankees' 5-3 win over the Tampa Bay Rays. 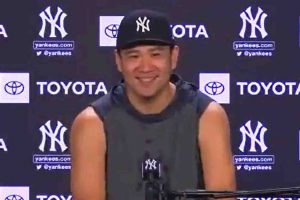 In analyzing his performance, Tanaka cited the effectiveness of his slider and split-finger fastball as keys for him.

"My sliders made the difference in today's start," Tanaka insisted.

"I'm glad I left the mound on a good note," he added. "They got me last time, so I wanted to get them back this time." 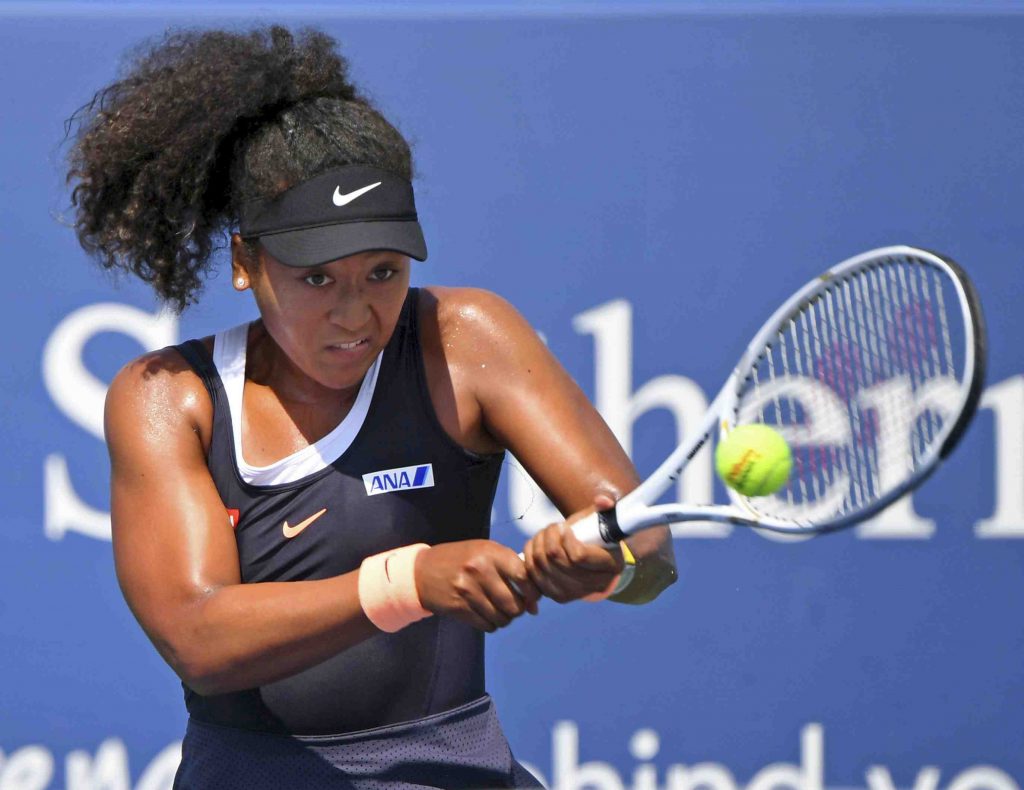 With the victory over the 137th-ranked Kostyuk, Osaka moved on to a fourth-round match, which was scheduled to begin at 10:30 a.m. JST on Monday, September 7.  Up next: Osaka, the No. 4 seed and world No. 9, was set to meet No. 14 seed Anett Kontaveit.

Osaka, the 2018 U.S. Open women's champion, got annoyed with herself during the match against Kostyuk and threw her racket.

"While I was playing, honestly, I was cursing myself out," Osaka told reporters later, "so you wouldn't want to know what I was saying. "It's what I do in times of extreme anger and frustration." 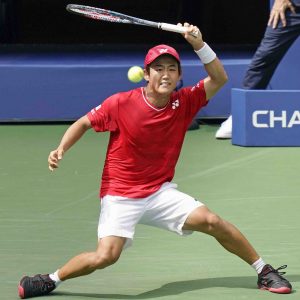 Yoshihito Nishioka in action against Andy Murray at the U.S. Open. 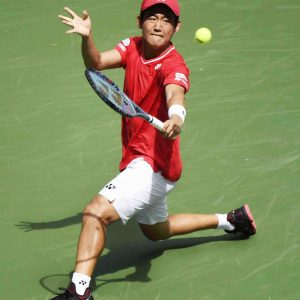 Nishioka lost in a five-set match in the men's singles opening round.

Yoshihito Nishioka lost a heart-breaking five-set match in the U.S. Open first round to Andy Murray on Tuesday, September 1.

"My opponent was tenacious at the end of the tie-breakers, while I was mostly passive," world No. 49 Nishioka stated.

Sportswriter Kevin Mitchell of The Guardian, a British newspaper, included the following details in his compelling match report:

"Nishioka hits a tennis ball like a boxer throwing a wide left hook, swiveling on his lead toe and punching through the horizontal with short, concentrated power. The last lefty Murray played here was Fernando Verdasco, who beat him in four sets in the second round two years ago, but the Spaniard’s blows came from a foot or so higher. Nishioka is 5 feet 7 inches, on the same eyeline as Diego Schwartzman, the ninth seed who fell in five against Cam Norrie on Monday.

"Nishioka’s rapier blows began to hurt and Murray slowed visibly as the first set passed him by. He quickly lost control of the second with a couple of timid service games, and his best nights seemed a distant memory. There was no crowd, none of the New York wind he loves to fight, not even an incident to feed on. Nishioka was a set and 3-0 up with ball in hand against an opponent he respectfully referred to beforehand as 'one of the great players' and he would not relent." 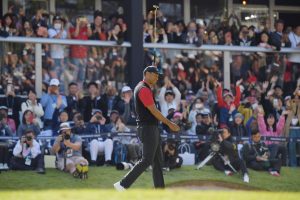 The 2019 Zozo Championship attracted a big crowd to watch Tiger Woods and other PGA stars in Chiba Prefecture.

In Japan's first PGA Tour-sanctioned tournament, Woods pulled into a tie with all-time great Sam Snead on the wins list.

Because of the global pandemic, the PGA  decided to move this year's Zozo Championship to Sherwood Country Club in Thousand Oaks, California, October 22-25. The decision was announced on September 1.

"Considering Zozo Inc.'s main business is in Japan, the decision to hold its event in the United States underscores their commitment and support towards our sport, communities where we play and the PGA Tour," said Ty Votaw, the PGA Tour’s executive vice-president international.

In a related decision, the PGA moved the CJ Cup from South Korea to Las Vegas due to travel restrictions during the pandemic. It will also be held in October. 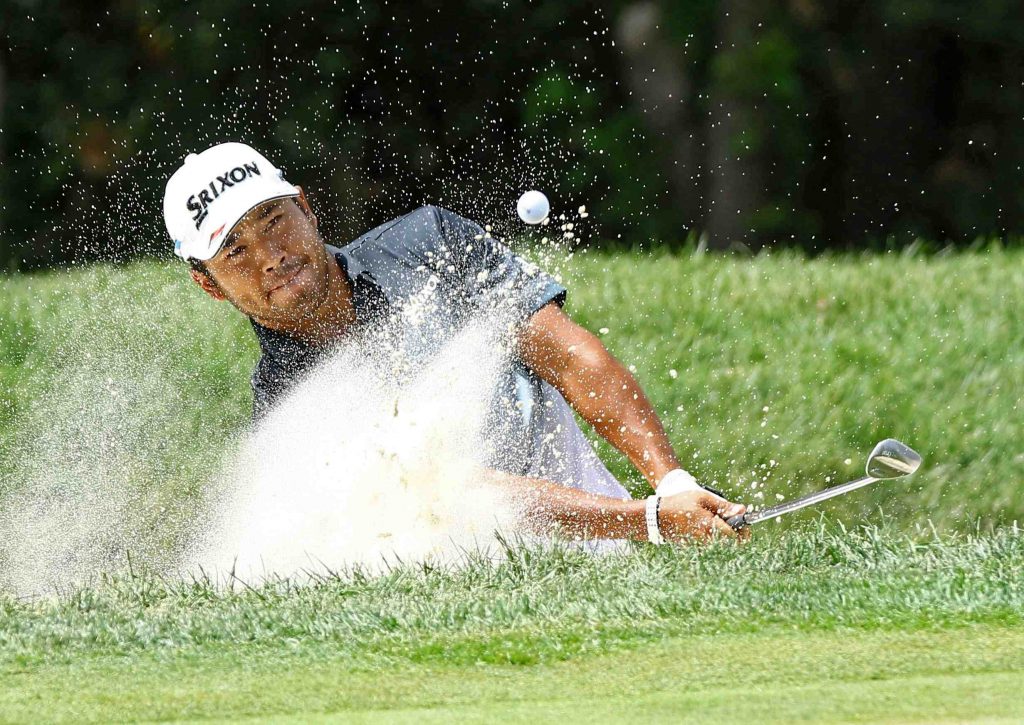 Hideki Matsuyama shot 2-under 278 and tied Joaquin Niemann for third place at the BMW Championship, which wrapped up on Sunday, August 30.

Dustin Johnson and Jon Rahm tied for first place at 4-under 276, with Rahm winning the title on the first playoff hole.

Johnson and Matsuyama were tied for the lead entering the final round. Both men shot 1-under 69 in the third round in Olympia Fields, Illinois. That put them at 1-under 209 overall.

In the opening round, Matsuyama had the day's best score with a 3-under par 67 on August 27.

"I'm not really sure what I had going today," Matsuyama said after the first round. "But that last putt, that long putt that went in, very happy with that one, so we'll remember that one."

He was referring to an impressive 67-foot putt on the final hole. 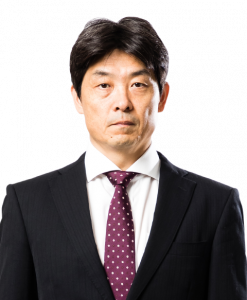 Osaka Evessa head coach Kensaku Tennichi is undergoing treatment for malignant lymphoma, which he was diagnosed with in June.

The 53-year-old is involved in the Western Conference team's planning for the upcoming B. League season, but he continues to receive medical treatment at the hospital for lymphoma.

Assistant coach Akitomo Takeno, who is running the first-division team on a day-to-day basis, will lead the squad from the bench in Tennichi's absence.

Tennichi said his treatment for lymphoma is likely to be for about five months.

"I will continue to work remotely with the club, and from December or January I would like to join the team and work with you again in Osaka," he said in a statement posted on the team's website on August 29.

The Evessa went 26-15 last season in Tennichi's first season of his second stint in charge of the Kansai club. He guided the Evessa from 2005-10 and led the club to three consecutive bj-league titles in the now-defunct league's first three seasons.

JSF To Bid for 2023 World Championships

The 2023 World Figure Skating Championships could be returning to Saitama Super Arena.

The Japan Skating Federation finalized plans to make a bid for the marquee competition during a board meeting on Wednesday, September 2.

Saitama Super Arena most recently hosted the 2019 world championships. The COVID-19 pandemic forced the cancellation of this year's event, which was scheduled to be held in March in Montreal.

The International Skating Union, the world's governing body for figure skating and speedskating, is scheduled to award the 2023 event in either May or June 2021.