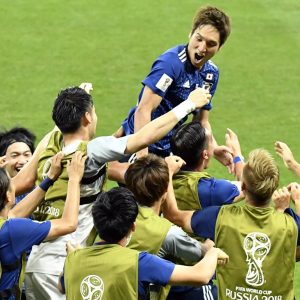 The Nishino-led Japan team was just seconds away from extended time where they could possibly revert their defense lapses to a first-time ever World Cup quarter-final birth. Instead, Belgium makes an entry in the history books for the first 3-2 come-from-behind victory on a dramatic Nacer Chadli winner in the dying seconds of regulation time.

The first half of the match saw lots of close calls and shots on target from the Red Devils, who also kept most of the possession, staying well-composed and setting the tempo, forcing Japan to play defense. However, they couldn’t reach the back of the net in repeated opportunities. Japan showed aggression early on with Shinji Kagawa’s shot, though off-target, fighting for a place in the quarter finals. With a scoreless half and Japan’s Shibasaki yellow-carded, neither team made any changes for the second half.

A long ball from Japan’s inner half to Belgium’s boxed area connected with Genki Haraguchi, who put Samurai Blue in the lead in the 48th minute, breaking the first-half deadlock. Japan would ride this wave of momentum and newfound confidence. Without any hesitation from a Kagawa pass, Takashi Inui scored a beautiful goal from outside the box, finding his sweet spot—the lower right corner of the opposition’s goal. 2-0 and Japan had now scored more goals in the ongoing World Cup than they had ever done in previous outings. Belgium was in real trouble.

Sadly, this was the highest point of Japan’s run as the Red Devils were awakened, answering back through Jan Vertonghen’s and Marouane Fellaini’s goals—both headers and leveling the score. After 77 minutes of play, Japan 2-2 Belgium, a thriller of a contest had begun.

Super-sub Keisuke Honda entered the game for Haraguchi in the 81st minute. He made his presence known immediately but couldn’t find the back of the net on a menacing run inside the box. Eiji Kawashima made close-range saves against Chadli first, then Romelu Lukaku later—both were headers as well. Four minutes of stoppage time was added.

In the 93rd minute, Japan was in position for a set play with a corner kick. Honda sent the ball over and in front of the goal area, but was read easily by the Belgium keeper, Thibaut Courtois, who snatched the ball out of the air and initiated the counter-attack. What followed was poetry in motion as the ball traveled from one side of the field, was touched five times by three players, and then chipped into the back of Japan’s goal. The referee whistled the end of the game and the come-back was complete.

Where Do They Go from Here?

Despite a rocky start to their campaign with management changes, Samurai Blue showed great promise, advancing to the Round of 16 and almost taking out Belgium, who won all their round matches. Team members voiced their feelings and wished they could’ve played together longer and deeper into the tournament. Notable retirees are goalkeeper Kawashima, who is 35; captain Hasebe, who is 34; Honda and Okazaki, who are both 32. Expect a Haraguchi-led team to make a deep run in the 2020 Tokyo Olympics.

Belgium faces Brazil in the quarter finals on Saturday, July 7. Should they upset the tournament favorite with another classic win, they take on the winner from Uruguay-France—both teams coming out of their respective groups on top.

Watch It Now, Later, or Never?

You’ll never see a wild finish like Japan-Belgium again in our lifetime. The underdog team, Japan, was up 2-zip, but Belgium’s almost impossible last-minute victory will make any person appreciate football. Watch now!