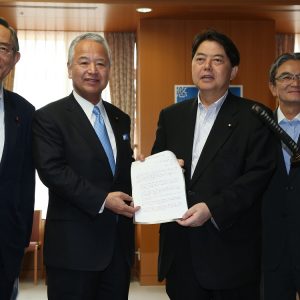 On June 22 a written request for a budget increase to train Japanese sword artisans was delivered to Japan’s Minister of Education, Culture, Sports, Science and Technology (MEXT) Yoshimasu Hayashi.

According to Akira Amari, former Minister of State for Economic Revitalization and representative of the group:

Japanese Sword Culture is a candle in the wind. It is likely the greatest craftsmanship in the world. We hope that the process from start to finish will be supported in order to conserve the culture of the extremely unique Japanese Sword, which is both a weapon and a work of art.

Noting that the Japanese Sword is a “beautiful, sacred work of art which is deeply connected to and a continuation of culture and tradition,” the petition also called for increased subsidies for the Tatara steel industry, which produces the raw material, Japanese Steel (Tamahagane), as well as support through government policies, displays in museums, and so forth, to help broaden awareness of the brand.

Minister Hayashi replied that he would review the issue thoroughly.

In recent years, Japanese swords have been gaining popularity, particularly among young women—so much so that the term “Sword Girls” was coined. Even overseas interest is rising, with Iaido—a Japanese sword martial art—and similar practices becoming popular.

Meanwhile, in Japan, the number of swordsmiths has declined. As a consequence, business is tight for Tatara steelworks due to the very real limitation that a swordsmith can only make 24 swords per year.

Hiroshi Yamada, chief of the secretariat of the Parliamentary Group and member of the House of Councilors, warns: “Globally, Japanese Sword replicas from China and Thailand are rampant. ‘Made in China’ must not become the standard branding for Japanese Swords.”

Amari is a descendant of the famous feudal lord Shingen Takeda and collector of sword collectibles (particularly Tsuba grip guards). Other joint representatives of the group include LDP General Council Chair Wataru Takeshita, who hails from Shimane Prefecture, which is famed for its production of high-quality Tamahagane steel, and Hiroyuki Hosoda, chief of the LDP Constitutional Reform Promotion Headquarters. The group’s secretary general is Ichiro Aisawa, member of the House of Representatives for Okayama Prefecture, which was formerly a famed sword production area called Bizen Province.

Surrounded by LDP faction leaders, Hayashi said, “Although a variety of parliamentary groups present petitions, this is the first time the members have been such heavyweights.”

Other Japanese Sword articles:
Traveling the San’in: Orochi and the Mythical Origins of the Sword
Oku-izumo’s Annual Sword Steelmaking Begins
Japanese Swords: ‘Tatara,’ the Traditional Iron and Steel Culture of the San’in