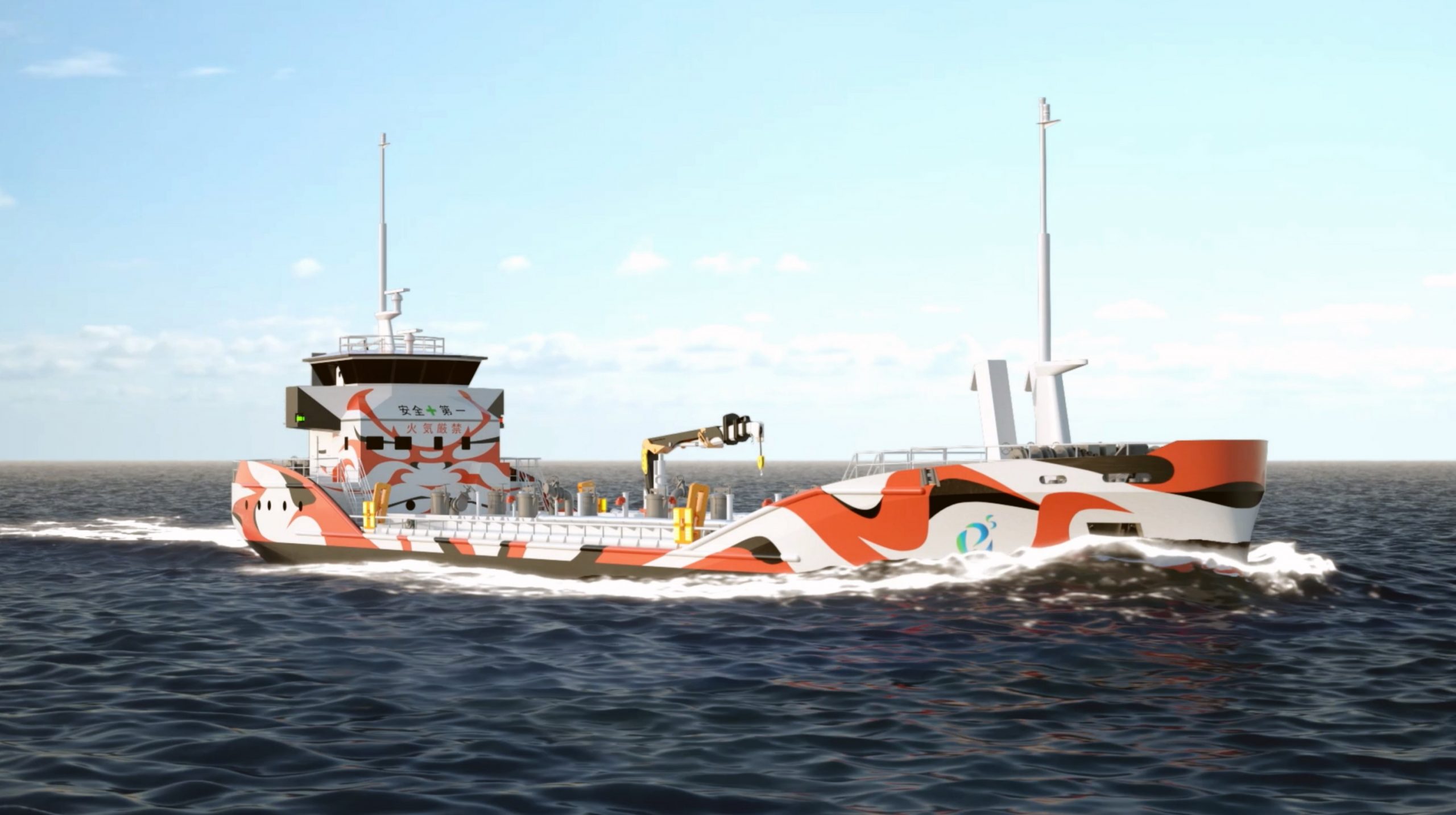 Japan’s shipbuilding companies are accelerating the development of environmentally friendly vessels that emit no greenhouse gases (GHGs) such as carbon dioxide (CO2).

Japan’s shipbuilding businesses have struggled against Chinese and South Korean rivals on price competition. However, Japanese firms hope to regain a competitive position as the demand increases for environmentally friendly ships, which is expected to surge in line with the global momentum for decarbonization.

Kawasaki Heavy Industries is developing a vessel equipped with high-power FCs, in collaboration with such companies as NYK Line, ENOS Corporation, and Toshiba Energy Systems, a subsidiary of Toshiba Corporation. They envision the vessel will be ready for demonstration experiments in 2024.

The vessel, equipped with a number of Toshiba Energy’s high-powered FC units, will be about 25 meters (82 feet) long, the size of a medium-sized sightseeing boat, with a passenger capacity of about 100.

A vessel using a hydrogen fuel supply system as its power source is being designed this year, with the expectation that construction will be completed in 2023. It will begin pilot operations along the Port of Yokohama coastline in 2024. When operational, it will be the world’s first fuel cell-powered vessel of a scale that is feasible for commercial purposes, according to Kawasaki.

Kawasaki also received an order for a propulsion system for an electric tanker powered by large-capacity lithium batteries from Tokyo-based Asahi MOL Tankers in October 2020. The system consists of components such as propulsion and power controls in addition to the battery system, a Kawasaki official said. Koa Sangyo Co. in Marugame, Kagawa Prefecture, and Imura Shipbuilding Co. in Komatsushima, Tokushima Prefecture, will jointly undertake construction of the tanker, he said, noting that while an electric ferry is already in operation, the electric tanker will be the first of its kind in the world.

Development of ammonia-fueled vessels is also making progress. JMU envisions development of an ammonia fuel-powered ship in cooperation with NYK and others by the end of fiscal 2023.

Imabari Shipbuilding, too, has been developing an ammonia-fueled ship in tandem with Mitsui E&S Holdings Co. and Itochu Corporation, with a view to establishing a joint venture by 2024 to lease out the vessel. In January, Imabari and JMU jointly established the design for a joint venture to develop environmentally friendly vessels.

Ammonia has a slow combustion rate and requires safety measures against nitrous oxides (NOx), but, like hydrogen, it emits no CO2. An advantage is that technologies for transportation and storage of ammonia have already been established. Imabari and JMU are set to put this technology into practical use ahead of the rest of the world, securing their superiority over Chinese and South Korean competitors.

According to the Japan Ship Exporters’ Association, Japan’s new ship export figures (the volume of shipbuilding orders received) for 2020 dropped 20% from the previous year to 7.33 million gross tons, largely because of the COVID-19 pandemic. The backlog of orders, or orders on hand, plunged to about half of what is considered appropriate for the coming two years.

Shipbuilders of Japan, China, and South Korea account for about 90% of the world’s shipbuilding volume. Worthy of note, China and South Korea have been nearly abreast of each other with around 35% market share each, while Japan has lagged with about 20%, and the disparity is gradually widening.

In particular, Chinese shipbuilders have been surprisingly successful, as if reflecting the momentum of China’s economy in the COVID-19 pandemic. That and the propensity of the Chinese and South Korean governments to violate internationally accepted rules are considered factors behind Japan’s poor performance in the shipbuilding competition.

Both China and South Korea have had the upper hand over Japan in restructuring the industry as well. In China, its largest and second largest shipbuilders merged in 2019 to become China State Shipbuilding Corporation (CSSC), with a world market share of more than 30%. In South Korea, South Korea Shipbuilding and Marine Engineering Co. (formerly Hyundai Heavy Industries Holdings Co.), which was the global leader until the emergence of CSSC, is seeking to integrate with Daewoo Shipbuilding & Marine Engineering Co. In contrast, although collaboration among shipbuilders has begun to spread in Japan, there has been no significant restructuring or efforts to create a giant shipbuilder.

Meanwhile, government regulations on carbon dioxide will be stiffened further from 2023, and it is expected that existing vessels unable to meet the CO2 goals will be replaced. Concerning this, chairman Tamotsu Saito of Shipbuilders’ Association of Japan said, “We are resolved to do our best to comply with the tightening environmental regulations by making the best use of Japan’s technological resources.”

At the same time, major Chinese and South Korean shipbuilders that are larger in scale than their Japanese counterparts are also focused on the issue, and competition over development of environmentally friendly vessels is likely to intensify further.

Michito Ida is an economics staff writer for the Sankei Shimbun.