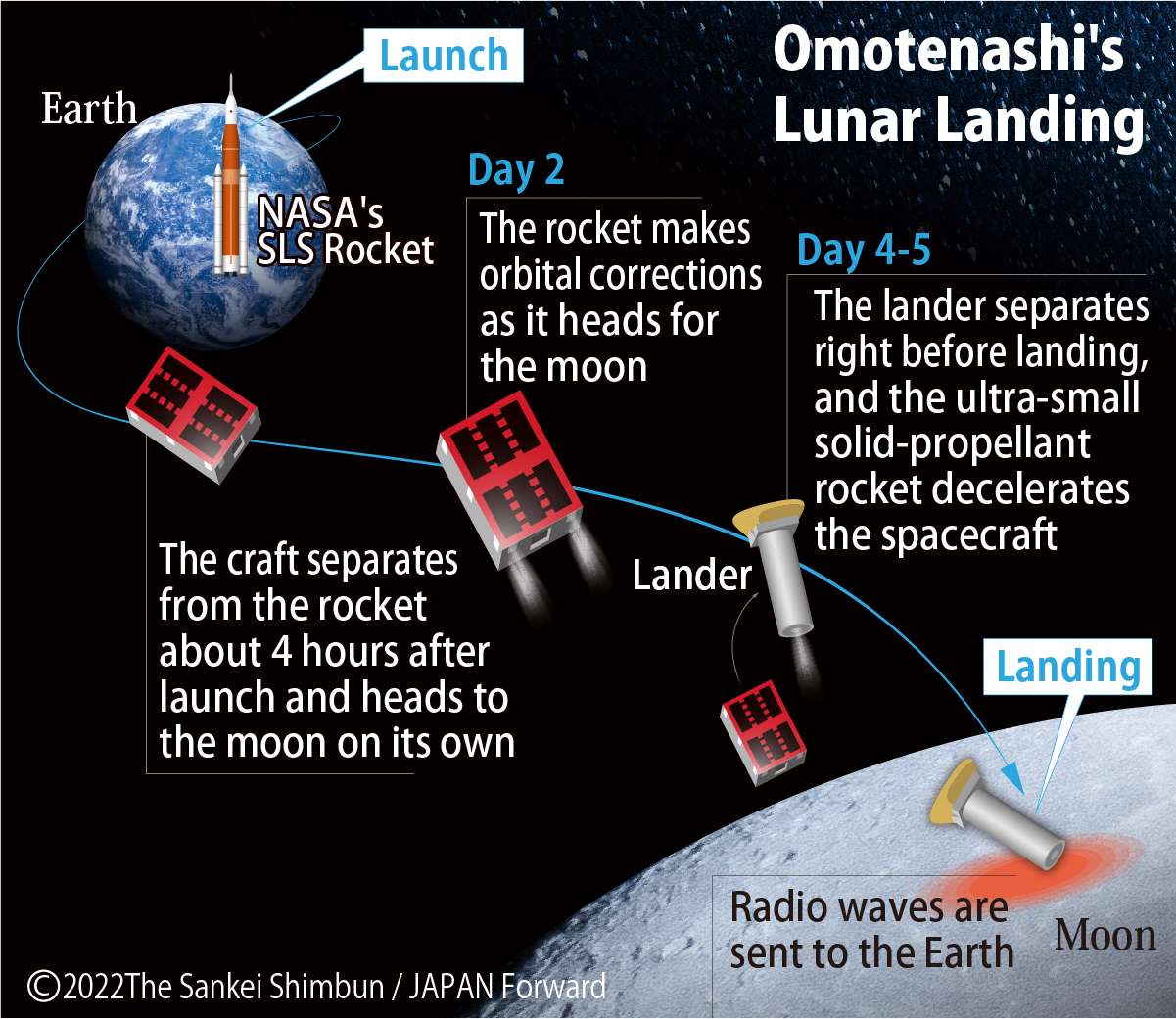 Planning OMOTENASHI's Lunar Landing and the processes that go into getting the space probe to the moon. (© Sankei / JAPAN Forward)

Aiming for the ultimate goal of Japan's first lunar landing, the Japan Aerospace Exploration Agency's (JAXA) ultra-small space probe, OMOTENASHI, aboard the United States National Aeronautics and Space Administration's (NASA) new rocket, currently scheduled to launch on just after midnight on the morning of November 16 from the Kennedy Space Center in Florida.

This is part of NASA's Artemis Project, an international lunar exploration project. If successful, Japan will be the fourth country to reach the moon, following the former Soviet Union, the United States, and China.

Science and Engineering in OMOTENASHI

It is being launched with NASA's Orion spacecraft unmanned test flight, taking advantage of the surplus capacity in the SLS rocket used in its launch.

Equipped with a solid-propellant rocket and communication equipment, OMOTENASHI will separate from the rocket about four hours after the launch and head for the moon on its own. The orbit will be controlled remotely from Japan, and expected to reach the lunar surface about 6 days after launch.

The radiation OMOTENASHI is exposed to during the flight will also be measured. In turn, this will be useful information for future manned missions.

A total of 10 ultra-small satellites from the United States, Japan, and Italy will share the SLS. Among them OMOTENASHI will be the only one to land on the moon.

Equuleus, developed by JAXA and the University of Tokyo, will also be on the SLS. And it will head to the "Lagrange Point," a point on the other side of the moon where the Earth and moon's gravity balance each other out.

Can a parcel-sized probe reach the moon? Development of OMOTENASHI was also a challenge to the norm. The world's smallest spacecraft is packed with the dreams and technology of researchers who have persisted in aiming for the moon.

"No one has made a lander this small. The project was quite the challenge," reflects Professor Tatsuaki Hashimoto, PhD (59), head of the OMOTENASHI development team at the JAXA Institute of Space and Astronautical Science.

NASA's "invitation" arrived in late August 2015. They asked for proposals by October for ultra-small satellites to be carried by the SLS, and JAXA immediately raised its hand.

Hashimoto is a skilled researcher who had spent the previous ten-plus years working on large-scale lunar landing projects such as Selene 2. However, due to budget constraints, the Selene 2 project was canceled, and he experienced the bitter experience of seeing a door towards moon exploration close.

The original period of time given to the OMOTENASHI development team was about one and a half years. It's a very short period of time, one that's unthinkable for the development of a typical spacecraft. However, "with the chance right in front of us, there was no way we could miss out on presenting a proposal."

Along with his colleagues, Hashimoto put together and submitted the concept proposal in two weeks. NASA adopted it the following April. A development team was established with Professor Hashimoto and four new researchers who had just joined JAXA that year.

A Road Filled With Difficulties

The feasibility of their plan, however, was low. Controlled deceleration must be used when landing a spacecraft on the moon, which has gravity. Otherwise it will crash into the surface.

To prevent crashes, lunar landers developed in the past were equipped with large engines and sensors, and weighed over 100 kilograms. On the other hand, NASA stipulated that the craft must be the size of a small parcel in order to ride along on the SLS.

Problems emerged one after another amidst the strict constraints, from the parts not fitting to not being able to tighten screws due to the space restrictions. The functions of the antenna that sends signals back to Earth were changed because the pipe to inflate the airbag wasn't able to fit.

As for the deceleration process when landing, a highly sensitive control device would be too large. So they decided to develop an ultra-small solid-propellant rocket that was more difficult to control but had strong propulsion. They also aimed to land minimal parts, such as the antenna, rather than the entire body of the spacecraft.

Still, the landing speed can reach 180 km/h, with an impact that is 10,000 times the acceleration due to gravity on Earth. In order to protect the spacecraft, shock-absorption and resin-fixing technology developed for JAXA's lunar lander "SLIM," which is scheduled to be launched this year, and the lunar exploration program "LUNAR-A" which was canceled, were applied.

Young members visited other project teams many times to learn and implement the technology.

Origin of the Name 'OMOTENASHI'

The unique name comes from the fact that the launch was originally scheduled to take place before the Tokyo Olympics. In addition, it was hoped that OMOTENASHI would welcome the humans and spacecraft that come to the moon as the first probe to land on the moon during Japan's lunar exploration era.

Based on the applications of technology from other teams, Hashimoto said with a laugh that, "I wanted to support the other projects with the knowledge gained during the development. But I actually ended up on the receiving end of their ‘omotenashi.'"

The name builds on the Japanese word, but it is also the acronym for “Outstanding MOon exploration TEchnologies demonstrated by NAno Semi-Hard Impactor.” In other words, OMOTENASHI.

The probe's development cost was ￥700 to ￥800 million JPY ($5-6 million USD), a significant cost reduction. It is expected that the technology to transport supplies to the moon, among other developments, will also spread to the private sector, universities, and research institutions.

If OMOTENASHI can successfully transmit radio waves to the Earth after landing on the moon, the mission will have been a success. It is also equipped with a camera, so if there is spare energy, it will attempt to capture photographs of the Earth and moon.

According to preliminary calculations, the probability of a successful landing is about 30%. Hashimoto says, "It's the best to have a successful launch, but more than anything, we would like to pass on the technology we have gained so far into the future."

The challenge of the "world's smallest" spacecraft, which will pave the way for Japanese lunar exploration, has only just begun.

(Read the related earlier report in Japanese at this link.)