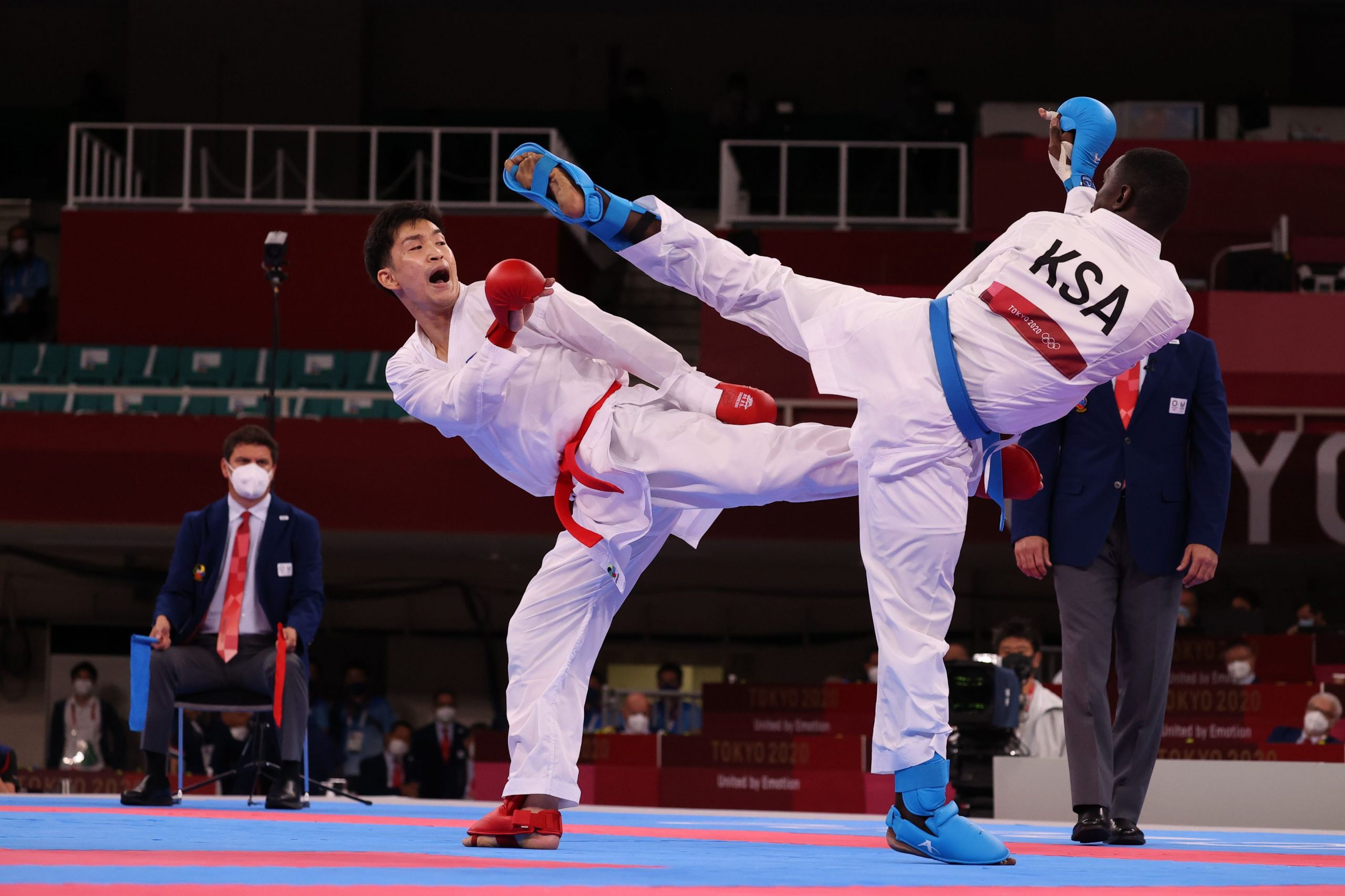 It is often said that, “The samurai haven’t existed for over a hundred and fifty years,” but the samurai existence still permeates Japan to this day. Japan’s baseball team is called Samurai Japan, the soccer team, Samurai Blue, and the rugby team a little more abstract, the Brave Blossoms, referring to the cherry blossoms often associated with the ephemeral life of the samurai.

This year for the first time, the world’s samurai gathered on center stage at the Nippon Budokan to battle it out in the 2020 Tokyo Olympics. After two days of exciting displays of kata (forms) and combat, Saturday, August 7 was the final day of events featuring the men’s and women’s heavyweight kumite (fighting) categories.

Unfortunately, karate will not be included in the 2024 Paris Olympics, and its future as an Olympic sport is uncertain. However, on this occasion, it certainly did not look out of place. Although, there is obviously room for improvement. The men’s and women’s team kumite and kata events were noticeably absent and probably took away a large element of excitement and appeal of the overall event.

Additionally, the changes in rules in order to gain inclusion into the Olympics have changed the face of karate. Some of the changes were for the better promotion/understanding of the sport, but some were not.

The merging of the lower weight categories was an obvious disadvantage to the competitors from the lowest weight category. There are other aspects of the rules that have tried to keep the action going for the viewers, but actually seems to have detracted from the spirit and technical aspects of karate.

The preliminary rounds of both pools were very hotly contested.

In the first semifinal, Zaretska faced Gong. Going into the match, Zaretska was the clear favorite, but Gong unperturbed came out strong and took the first point. Zaretska immediately responded by tying the match. Both fighters stood their ground, trading point for point, but Zaretska’s experience showed, first taking an extra point and then clinching the match with a world-class ippon in the closing seconds.

In the second semifinal, Abdelaziz faced off against Berultseva. Both fighters were hungry for a spot in the final. Many intense exchanges took place. Abdelaziz’s superior technique prevailed, sending her through to the final.

The division’s final was going to be a tight contest and it did not disappoint. Abdelaziz maintained her composure and fended off Zaretska for the three-minute bout, taking two single points in the last 30 seconds of the match. Olympic gold medal to Egypt.

The men’s over-75 kg preliminary rounds were not without incident. Germany’s Jonathan Horne, the 2018 world champion in the over-84 kg category, in his contest with Gogita Arkania of Georgia fell awkwardly in a clash between the two fighters and possibly broke his arm.

The opening semifinal pitted Araga, the 2016 world champion at under-84 kg, against Hamedi, the 2019 Asian Karate Championships winner at over-84 kg. Hamedi took two single points that Araga could not manage to recover before the end of the bout. Hamedi advanced into the final, and another bronze medal to add to Japan’s record-breaking tally.

“I tried to fight with a sense of pride after being chosen to represent Japan when karate, which originates in Japan, is making its first Olympic appearance,” Araga was quoted as saying by Kyodo News after his match.

“I took to the mat thinking I can’t have us (Team Japan) leave without a medal here.”

The second semifinal was between Ganjzadeh and Aktas. Both fighters gave their all, matching each other point for point. However, when the final buzzer sounded the match was awarded to Ganjzadeh as he was the first to score in the match.

As a result, Ganjzadeh met Hamedi in the final.

The final match of the day to decide the heavyweight (over-75 kg) Olympic karate champion started with Hamedi taking an ippon (three points) in the opening 10 seconds.

Ganjzadeh tried to reclaim the points and dropped another point, putting him four points down. Ganjzadeh finally pulled back a point in the 48th second. In an intense exchange, the Iranian fighter was knocked out and had to be removed from the arena on a stretcher.

Despite a significant lead, Hamedi forfeited the match for excessive contact. The gold medal went to Ganjzadeh. Hamedi had to settle for silver.

The way that the current rules and competition is organized could do with some adjusting. The senshu rule seems rather arbitrary, and judo also has a golden score period, so there is no reason not to include golden score in the karate competition.

Having said that, karate was a welcome addition to this tournament and would be good to see included in future Olympics, along with men’s and women’s team kumite and kata, and maybe even mixed teams to bring it in line with judo.