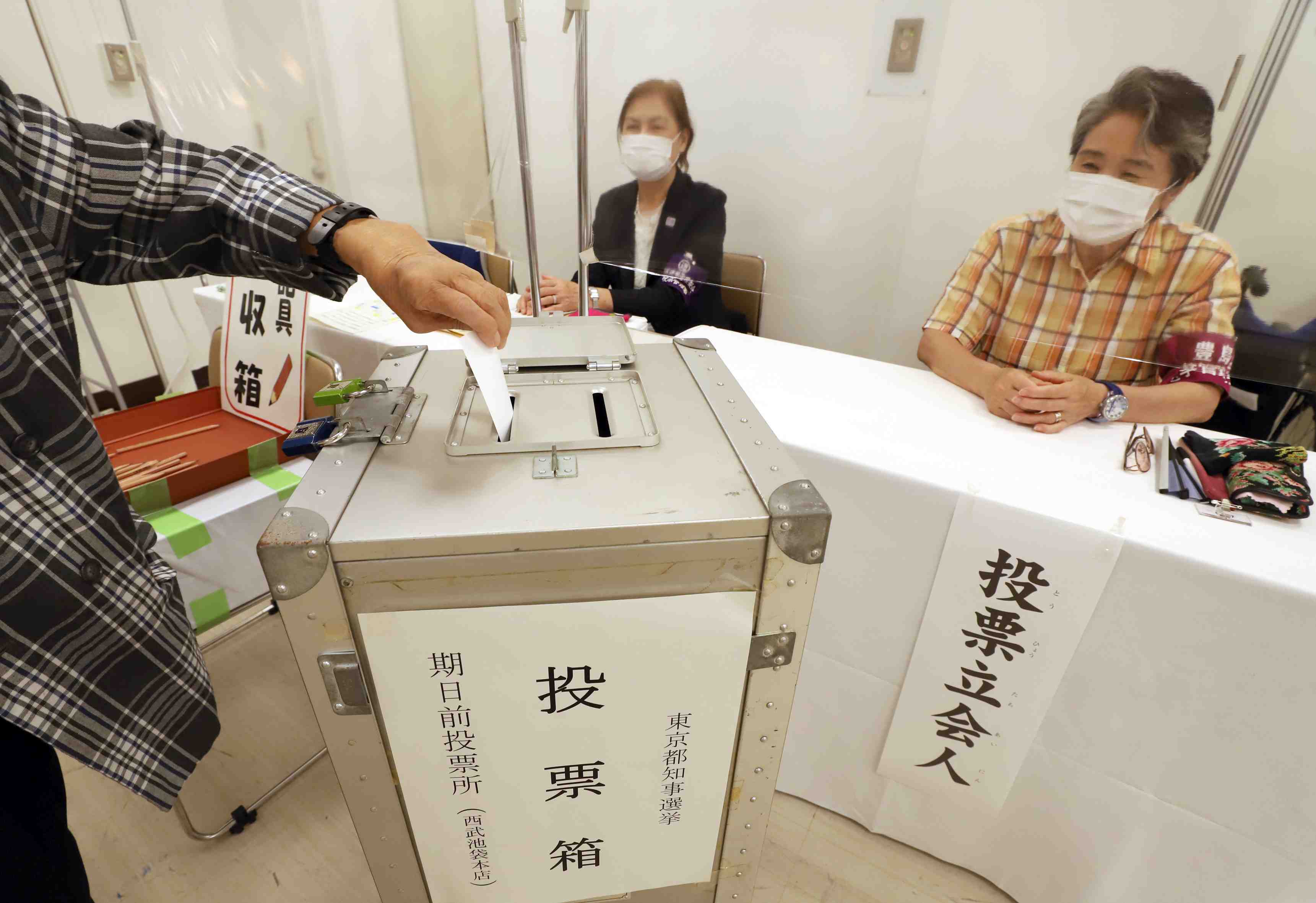 October 31, 2021 is the day of a national election for members of the Lower House of the Diet. A simple ballot box collects the ballots written out by voters

On October 31, the Japanese public will go to the polls to exercise their democratic right — a right that is widely considered to have been gifted by a benevolent America during the postwar occupation.

Why, however, is the national leader of Japan a prime minister and not a president? Why did the United States occupation supremo, General Douglas MacArthur, not copy the model of his native America when he “installed” democracy in Japan? What’s more, why did the Potsdam declaration, the surrender demand that was presented to Japan in July 1945, prescribe the “revival” and not adoption of democracy?

The answer is that prewar Japan was a democratic state.

At first glance, the democratic system of prewar Japan appears little different from that of prewar Britain. There were two houses of parliament: the House of Representatives and the House of Peers.

The Representatives were elected by male suffrage, while the Peers were either elected, appointed by the state, or granted a seat by virtue of being a member of the aristocracy. In accordance with the British Westminster system of parliament, the House of Representatives was the main policy-making branch of government while the Peers provided checks and balances.

Democracy was one of a number of Western-influenced reforms that were adopted by the Japanese in the late 19th century. They were driven by the genro — imperial advisors who were drawn from the clans that had supported the emperor during the Meiji restoration. When turning to the issue of democracy, the form to which they were inclined was one in which the prime minister and cabinet were drawn from the ranks of their own, with an elected parliament in support.

In 1890, when national elections commenced, the percentage of the male population that qualified under the taxation threshold for the right to vote was a mere 6% — roughly the same percentage that had encompassed the former samurai class. It was then gradually relaxed over the next 35 years before culminating in the endowment of the franchise to all tax-paying men in 1925. Through the use of this transitional process, democracy was able to develop without the massive upheavals that would surely have accompanied the acquisition of universal suffrage by a largely uneducated electorate at the start of the democratic era.

The systematic way in which the franchise to vote was won was paralleled by the incremental rise in the stature of the elected representatives over the first few decades of Japanese democracy. While the early prime ministers were drawn from the ranks of the genro themselves, the party men soon came into play.

At that historical juncture, Japan would have been well-served if the prime ministership had been reserved for an elected member of the House of Representatives. Unfortunately, it was not to be. For the remainder of pre-MacArthur years, the prime minister was appointed by the emperor on the recommendation of the genro or other close advisors. He did not have to be an elected member of parliament, and did not require the endorsement of the electorate.

One critical weakness of the Japanese parliamentary system was the role of the emperor. The emperor had influence but was removed from the formal decision-making process. Additionally, the spiritual nature of his position decreed that while he be shielded from smoke-filled backroom arm-twisting and deal-making, the ultimate aim of lawmakers was to serve the emperor.

Further structural flaws concerned the position of the Imperial Army. The army was technically the instrument of the emperor and not of the parliament or the prime minister’s cabinet. This gave rise to a culture of assassination, intimidation, and rebellion in which renegades could claim to be acting in defense of the “real intentions” of their emperor — an emperor with a limited capacity to denounce their behavior.

The seeds of the domination of the political class by the military class were significantly sown in 1900 by the decision to reserve the posts of army minister, navy minister, and war minister for generals and admirals on active duty, not retired.

While never compelled to resign, even in the face of a successful no-confidence motion, a prewar Japanese cabinet was required to form unanimous decisions. And if unable to do so, it was obliged to disband. The 1900 decision, combined with the requirement of cabinet solidarity, gave an effective power of veto to the Imperial Army and Navy.


Political Flex of the Military

The veto was first employed in 1912 when the minister of war withdrew from the cabinet over the refusal of the government to form new army divisions. While the reaction of the civilian branch was to rescind the active list stipulation the following year, the military cabinet posts were commonly filled by retired generals and admirals. No prime minister in the prewar years chose to initiate a culture of civilian oversight by placing non-military representatives in the army, navy and war ministry posts.

In 1936, reactionary forces from the ranks of the army staged the most dramatic of the attempted military coups that broke out in 1930s Japan. Elder statesmen were murdered, moderates one and all. In the wake of this event, the increasingly unenviable title, “Prime Minister of Japan,” was assumed by Koki Hirota, the foreign minister in the previous cabinet.

In an attempt to blacklist the military leaders who were subsequently purged, Hirota reinstated the active duty stipulation. This attempt at a cure, however, proved worse than the disease. During the next nine years until the surrender of Japan, the veto, either as a threat or actually used, was a powerful tool for the increasingly more influential militarist elements within the army and navy branches.

The first cabinet to fall after the active duty reinstatement was ironically that of Hirota himself when, in 1937, the war minister, General Count Terauchi, resigned in response to criticisms of the army in the Diet.

Following Hirota’s fall, the task of forming a cabinet was entrusted to General Kazushige Ugaki — an announcement that was greeted with widespread support from both the dominant political parties and the press. Ugaki, however, was never able to put a cabinet together. As a moderate military leader who as government minister had formerly consented to a reduction in the size of the standing army, he was deemed objectionable by the hard-line elements and no one from the active list could be persuaded to serve as his war minister.

Hirota was eventually replaced in February 1937 by Senjuro Hayashi, a favorite of the army whose prime ministership was nonetheless unable to see out the year.

The veto was further used to bring down the cabinet of Mitsumasa Yonai in June of 1940. After Yonai, no other cabinet that was formed before the fall of Japan was put together without the militarists’ rubber stamp.

The United States of America can take pride in having severed the ties between the emperor and the parliamentary decision-making process. It brought down the curtain on appointed prime ministers and saw the voting franchise awarded to women. But its influence in the flowering of democracy that occurred in the postwar years is less than commonly thought.

In 1940, the political parties of Japan were swallowed up into the Imperial Rule Assistance Association, an amalgamation of the parties into a form of one party government. Following Japan’s surrender at the end of the Pacific War, these same political parties reemerged to provide the foundation for the reintroduction of national party politics.

The parliament building existed before the war. Moreover, it included an administrative staff and a functioning bureaucracy. The Japanese people were accustomed to the electoral process.

The Japanese parliamentary system never stopped functioning and was never even suspended. The U.S. occupation was tweaking, not creating.


Mistakes Made, Learned Lessons for the World

Negative implications resulting from misperceptions about Japan abound. The history of Japanese democracy is no exception.

In 2003, U.S. President George W. Bush initiated nation building within Afghanistan and Iraq, using the myth that the U.S. had gifted democracy into Japan as his primary precedent. Unsurprisingly, democracy did not bloom in the manner that the former president had anticipated.

By 2021, presidents Donald Trump and Joe Biden had given up on Afghanistan, concluding that a war of nearly 20 years was time enough for democratic civil society to take hold. To the extent that they were influenced by the inability of contemporary Afghanistan to mirror mid-1960s Japan, their reasoning was flawed. The Japan of 1910 would have been a more reasonable comparative model.

The Iraq and Afghanistan adventures, however, are rapidly receding into the past. The challenge for the future is for reluctant converts to democracy to be brought into the fold.

In nations such as Kuwait, Saudi Arabia, and most pertinently China, the prevailing hereditary elite are no more likely to hand away their unilateral decision making prerogatives than were the Japanese 19th-century oligarchs. The Japanese paradigm of incremental divestiture is therefore an obvious model to be considered by them. Or it would be, if not for the prevailing belief that democracy in Japan is a gift of a benevolent America that dates only from 1945.

A final lesson applies to the presumed mature democracies of the present day. In the 1930s, Japan’s democratic institutions proved insufficiently strong to resist the militarist scourge, yet a mere decade earlier, in the 1920s, they had appeared to be flourishing.

This serves as a cautionary tale to those nations that are starting to wonder if their democratic institutions are truly as strong as all once assumed.

Find other articles by the author at this link.