[Mythbusters] Reporting — and Exploiting — the Tragic Death of Hana Kimura 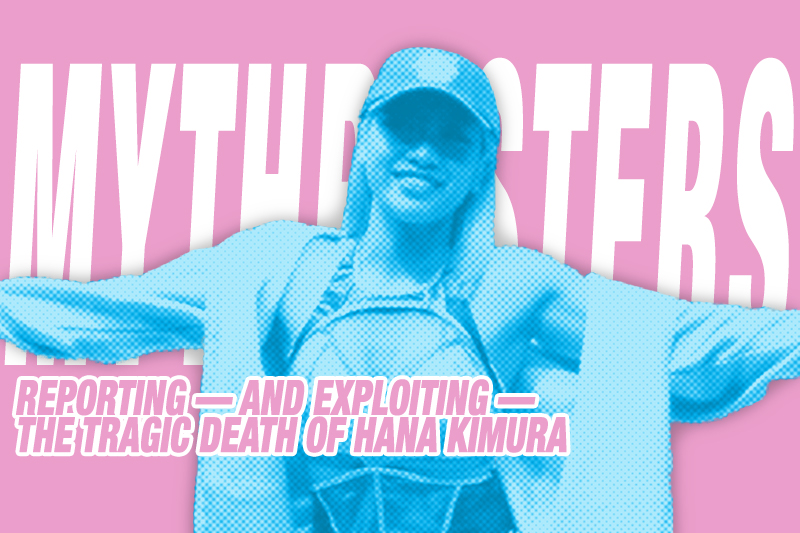 On May 23, Hana Kimura, a member of the cast for the Fuji Television series Terrace House distributed by Netflix, was found dead in her Tokyo home.  From the first reports, there was speculation that she had committed suicide, and this was soon confirmed. She was only 22 years old.

Because of my research on “Japan in the foreign imagination,” the subject of a course I taught for nearly two decades, I wanted to see whether her suicide was treated in English-language media as something associated with reality television or something peculiar to the Japanese cultural and social environment.

For example, a commentary in the Los Angeles Times, entitled “A suspected suicide. Cyberbullying. Why some call this Netflix reality show ‘toxic,’” used examples and quoted comments specific to Terrace House, but there is not a single explicit or implicit assertion that what happened was in any way peculiar to Japan. To the extent a toxic culture was referenced, it was the culture of this particular program and the genre to which it belongs.

There was, however, implicit exceptionalism in some high-profile articles.  These articles offered only Japanese and Korean cases as examples of suicide related to reality television.

Studies have claimed that 21 (2016) or 38 (2019) suicides have been associated with such programs worldwide. Thus, the Japan-Korea emphasis in articles from the AFP/Guardian, the Washington Post, and the New York Times stand out.

The BBC, to its credit, included references to online abuse of reality TV celebrities as a general phenomenon in one of its two articles on Kimura’s suicide.

English language media in Japan was a mixed bag. The Asahi (English) noted that between 2004 and 2016 there had been 21 suicides associated with such programs. NHK, in reporting in English for its world service, noted two suicides associated with the British television program Love Island. The Mainichi noted reality star suicides in the U.S. and U.K., albeit only in passing.

Don’t disparage a person’s race, religion, color, gender or sexual orientation or generalize about a nationality or race.

Make sure that you’re introducing something new to the conversation.

Users who merely repeat an agenda and ignore the argument presented will be moderated.

Nonetheless, Japan Times moderators regularly allow long, repetitious screeds by someone who posts under the handle “Steve Jackman” that clearly violate the policy clauses cited here. For example, comments to the article “Notes uncovered detailing ‘Terrace House’ star Hana Kimura’s suicide” included a litany of evils associated with Japan, and by logical extension the Japanese people as a whole, including “Rampant discrimination, sexual harassment and bullying” and the claim:

I don’t know of any other country in the world where both offline bullying in the real world and online bullying are as common and as culturally accepted as they are here in Japan. The problem is made worse by the often self-righteous and holier-than-thou attitude of so many in this country since it is something that permeates throughout Japanese society.

For good measure he also makes completely fallacious claims about Japan being the “the home to millions of hikikomori” and the “second lowest birth rate in the world.”

Aside from the overtly racist attack on Japanese people, much of his screed is completely off the subject and does not deal with issues raised in the article. His total comments for this 650-word article totaled 825 words. Much of what he posted to this article has appeared in other comments he has posted to Japan Times articles.

These screeds often appear shortly after Japan Times articles are posted to the internet. This timing and the very appearance of these postings in apparent violation of JT standards suggests to me and others that “Steve Jackman” is a Japan Times insider or at least has an accomplice among its censors.

Had it not been a note from a Twitter follower in Norway, I would have missed what for me is far and away the most offensive article tied to the Kimura suicide.

This is “Hana Kimura’s death highlights Japan’s poor approach to mental health” that appeared on May 28 under the authorship of Min Ku, the Kansai Outreach Coordinator for Tell, which describes itself as a “not-for-profit organization dedicated to providing world-class, effective support and counseling services to Japan’s international community as well as helping to address the country’s growing mental health care needs.”

The article is a series of cultural stereotypes and claims that are either unsupported by hard data or are general issues not specific to Japan:

The bullying culture in Japan is so pervasive that school closures and telecommuting because of the pandemic have given rise to jokes about the unexpected benefits of staying at home — a reprieve from school and workplace bullying.

A few minutes of searching on the internet quickly reveals this pattern can be found elsewhere:

Meanwhile, COVID-19 is triggering the harassment of doctors and nurses, which jeopardizes everyone’s medical care.

To be sure, there have been reports claiming this based on scattered anecdotes and very small-scale surveys, but again this is not something that is Japan-specific.

Even when the author cites hard data, she twists it to denigrate Japan:

Suicide is the top cause of death for Japan’s 15-39 year olds, the only Group of Seven country for which this is true.

If one is looking for the country with a high suicide rate for teenagers and young adults, that country is New Zealand. Moreover, while the overall rate in Japan is declining and the youth suicide rate is constant, both are increasing in New Zealand.

International statistics generally use the term “self harm” rather than suicide. If drug overdose deaths were counted as “self harm” or suicide in the U.S. case, it is probable that suicide would be the leading cause of teen and young adult death. While there is widespread recognition that there is a severe and increasing problem, treatment and prevention is not prioritized in U.S. policy.

Recognizing the root of the problem as cyberbullying, articles in the New York Times and the Washington Post noted that, while Japan has had since 2002 a law directed against online harassment, using it is expensive and time-consuming, and the probability of a significant damage award or other remedy is low. Domestic newspapers have made the same points.

None of these articles or editorials have offered an example of a country that was allegedly handling this issue better than Japan. There appear to be no such examples available.

Yet cyberbullying is a problem that deserves substantive attention in all countries. One possible response is an advertising and subscription boycott of these programs and their distribution companies.

An advertiser and contribution boycott should also be the response to organizations such as the Japan Times and Tell that use the behavior of comment bullies and tragedies such as the Kimura suicide for clicks or contributions while engaging in gratuitous insults directed at Japan and the Japanese people.

RELATED ARTICLE:  Let Hana Kimura Be the Last: How Can We Prevent Cyberbullying?

Finally, viewers should ask themselves, “Have I nothing better to do than engage in what amounts to commercialized voyeurism?”