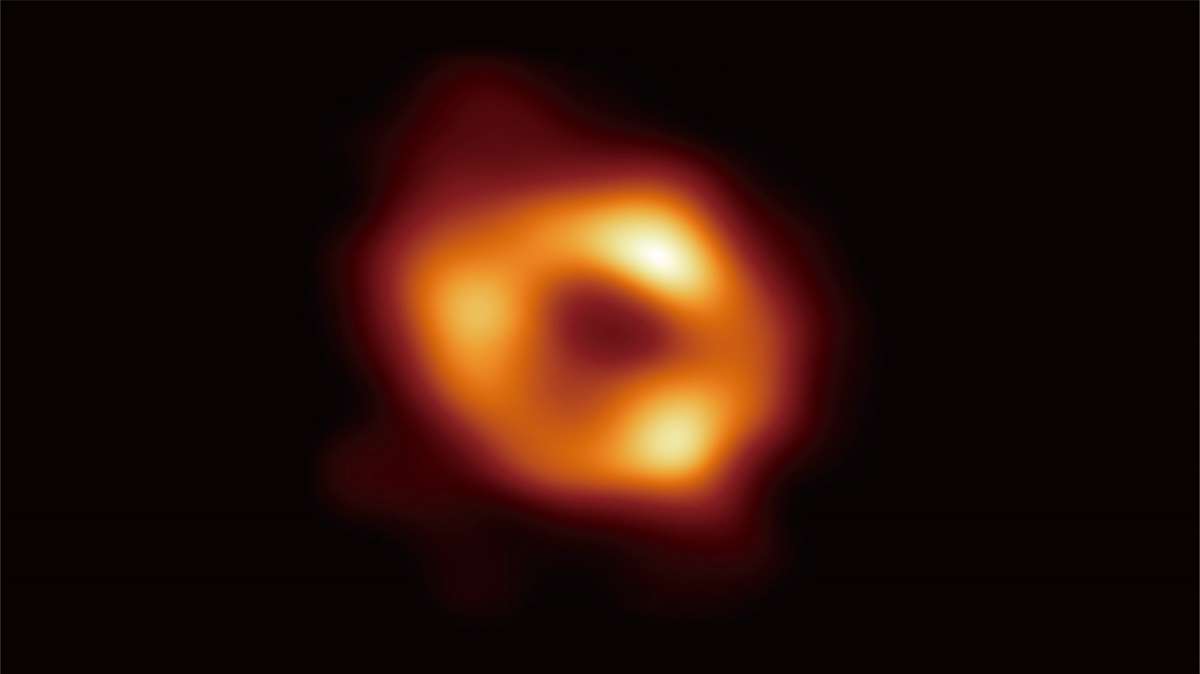 The black hole "Sagittarius A*" that the international team succeeded in imaging (provided by EHT, Collaboration)

Among the black holes, the heaviest and most mysterious of celestial bodies in our universe is Sagittarius A*. It is the black hole at the center of the Milky Way galaxy, home to our solar system.

On May 12, an international team including the National Astronomical Observatory of Japan announced that they had taken an image of Sagittarius A* for the first time. Black holes attract all substances with their extremely strong gravity, so they are difficult to see. This is only the second successfully captured image of a black hole in the world, and the first in the Milky Way Galaxy.

The Japanese members of the team said at a press conference in Tokyo on the same day: “It will lead to an understanding of the variety of black holes and galaxies. A new dawn of research has begun.”

Sagittarius A* is located about 27,000 light years from Earth and has a mass of 4 million times that of the sun. Its existence was confirmed by European and American researchers, and was the topic of the 2020 Nobel Prize in Physics.

However, it was impossible to take an image of it because it absorbed all light and was pitch-black.

The international team built a high-resolution observation system to address this problem. It is comparable to a giant Earth-sized telescope, made by linking the ALMA telescope in Chile, which was built partly by the National Astronomical Observatory of Japan, to other radio telescopes. A total of eight radio telescopes in six locations — including the United States, Europe, and the South Pole — are part of it.

After observing in April 2017 and analyzing the data, the scientists were able to capture the glowing of the surrounding gas, and a black-hole-like figure with a diameter of about 60 million kilometers emerged in the center.

Comparing the 2019 Discovery in the M86 Galaxy

The team used the same method in 2019 to create the world’s first image of a black hole. The subject of this image was a supermassive black hole at the center of the M87 galaxy in Virgo, 55 million light years away, with a mass 6.5 billion times that of the sun. The observations were carried out at the same time as for Sagittarius A*, but the analysis for the M87 galaxy came first because the matter surrounding Sagittarius A* had fast and unstable motion.

The two have differing characteristics. The black hole of the M87 galaxy was confirmed to have a jet-like phenomena in which gas is ejected at a tremendous speed. But this is not the case for Sagittarius A*.

Professor Mareki Honma of the National Astronomical Observatory of Japan, representative for Japan in the international team, said: “Comparing the images in detail will help clarify the origin of the difference in activity and the effect on the galaxy. It will also help verify whether the familiar laws of physics hold in spaces with strong gravity.”

A black hole is a celestial body with an extremely large amount of matter stuffed in a small volume. It has an exceptionally strong force of gravity. Even light cannot escape, and the black hole sucks in everything, including the surrounding gas.

As light is not emitted, it is difficult to capture its figure. For that reason, observations consist of capturing the light, radio, and X-ray waves of the surrounding gas and stars.

Furthermore, all light is swallowed in the middle of the black hole, leaving a dark gap. The surrounding bright ring is radio waves emitted from the high-temperature plasma gas near the black hole.

Due to the strong gravity, the direction that the radio waves propagate is bent. That allows even those waves that initially weren’t headed towards Earth to be seen here.

The Event Horizon Telescope (EHT) is built to be a giant, high-resolution observation system, essentially an Earth-sized telescope. By linking and synchronizing the ALMA telescope in Chile, partly built by the National Observatory, and other radio telescopes from all over the world, it becomes possible to image the region surrounding the black hole in high resolution.

The EHT has the resolving power equivalent to 2 million times that of a human’s eyesight. Think of it as the equivalent of seeing a golf ball placed on the moon from Earth.

(Read the related Sankei Shimbun articles in Japanese at this link and this link.)