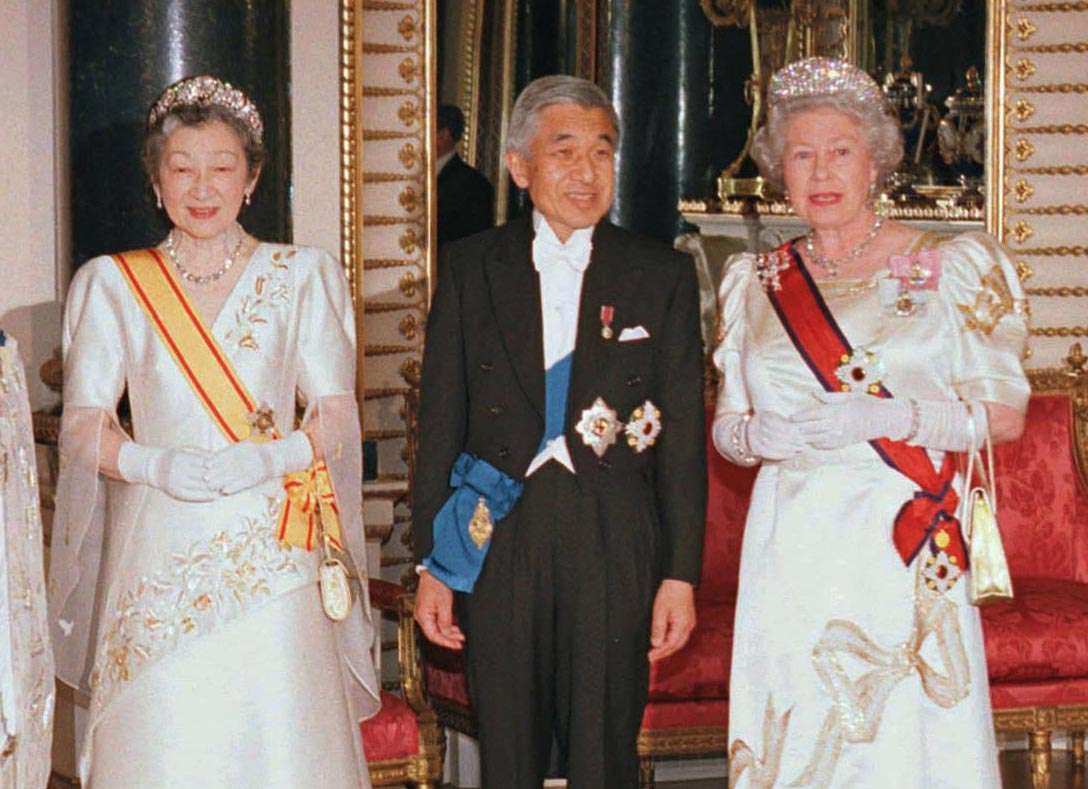 Queen Elizabeth II at a banquet at Buckingham Palace with Emperor Akihito and Empress Michiko, in 1998 © Kyodo.

On the evening of September 8 London time, in the middle of the night JST, Buckingham Palace announced that Queen Elizabeth II had died peacefully. She was 96 years old. Her eldest son, Prince Charles, will be succeeding her as King Charles III.

As tributes are pouring in from all over the world, Japan is joining in its remembrance of the longest-serving monarch in British history. Ruling since 1952, the Queen celebrated her Platinum Jubilee in February 2022, marking 70 years on the throne.

On Friday, September 9, Japanese Prime Minister Fumio Kishida joined the many heads of government who paid tribute to the longstanding monarch, as he told Japanese reporters:


The death of the Queen is a loss not just for the British people but for the international community. [Elizabeth II] led the United Kingdom through a turbulent period in world history. I would like to offer my heartfelt condolences on this occasion.

She played a key role in the achievement of peace and prosperity in this world during her 70 years as the longest-serving monarch in UK history.

Starting from her visit to Japan in 1975, she made a great contribution to strengthening Japan-UK relations. Japan’s thoughts are with the United Kingdom as the British people overcome this deepest sadness.

Kishida’s Tweet in English can also be found here.

On September 9, the Japanese flag over the Prime Minister’s office was also lowered to half-mast to honor the passing of the British monarch.

Since the then-crown prince, now Emperor Emeritus Akihito, visited the UK for the Queen’s coronation in 1953, the two royal families have had an important friendship for many years.

In 1953, representing the Showa Emperor Hirohito, Akihito attended Queen Elizabeth’s coronation. At the time, there was some opposition regarding the Japanese army’s British prisoners of war. Nevertheless, Queen Elizabeth welcomed Akihito, strengthening the friendship between the countries.

In 1975, the Queen became the first British monarch to visit Japan. Some of the archive pictures include a visit to the rock garden in Ryoan-ji, Kyoto.

There is an episode that saw the Emperor and Empress visiting the Queen in 1976 at Windsor Castle. It’s said that Akihito borrowed one of the Queen’s horses, and the two enjoyed horseback riding together. The Japanese royal couple also attended the 2012 Diamond Jubilee of Elizabeth II.

In 1998, then-Emperor Akihito and Empress Michiko were invited to a banquet at Buckingham Palace, and on that occasion, the Japanese emperor reflected, “We shall never forget the efforts of those who wanted to strengthen Japan-UK relations.”

The Baton Passes to the Next Generation

The exchanges between the two royal families continued with the younger generation.

The current emperor, Naruhito, studied abroad at Oxford University between 1983 and 1985.

According to the Imperial Household Agency, in 1984 Naruhito was invited by Elizabeth II to Balmoral Castle in Scotland, the favorite summer residence of the Queen. There Naruhito stayed together with other members of the royal family.

In 2001, Naruhito visited the UK and was welcomed by Elizabeth and her husband Prince Philip at Windsor Castle, where the British monarch showed Naruhito the castle library, which houses items related to the Japanese imperial family.

In October 2019, the first year of the Reiwa era, on the occasion of Naruhito’s Enthronement Ceremony as Emperor of Japan, Prince Charles attended the ceremony.

Just before that, in September, Princess Anne had visited Japan on the occasion of the Rugby World Cup. Anne met the Emperor and the Empress’ eldest daughter, Aiko, bringing the cultural exchange between the two royal families to the next generation.

In 2020, Emperor Naruhito and Empress Masako were scheduled to visit the UK for the first time since the enthronement, but the visit was postponed due to COVID-19. When the Duke of Edinburgh, Prince Philip, passed away in April 2021, the Japanese royal couple grieved his passing, and both of them respectively sent a message of condolences to the Queen.