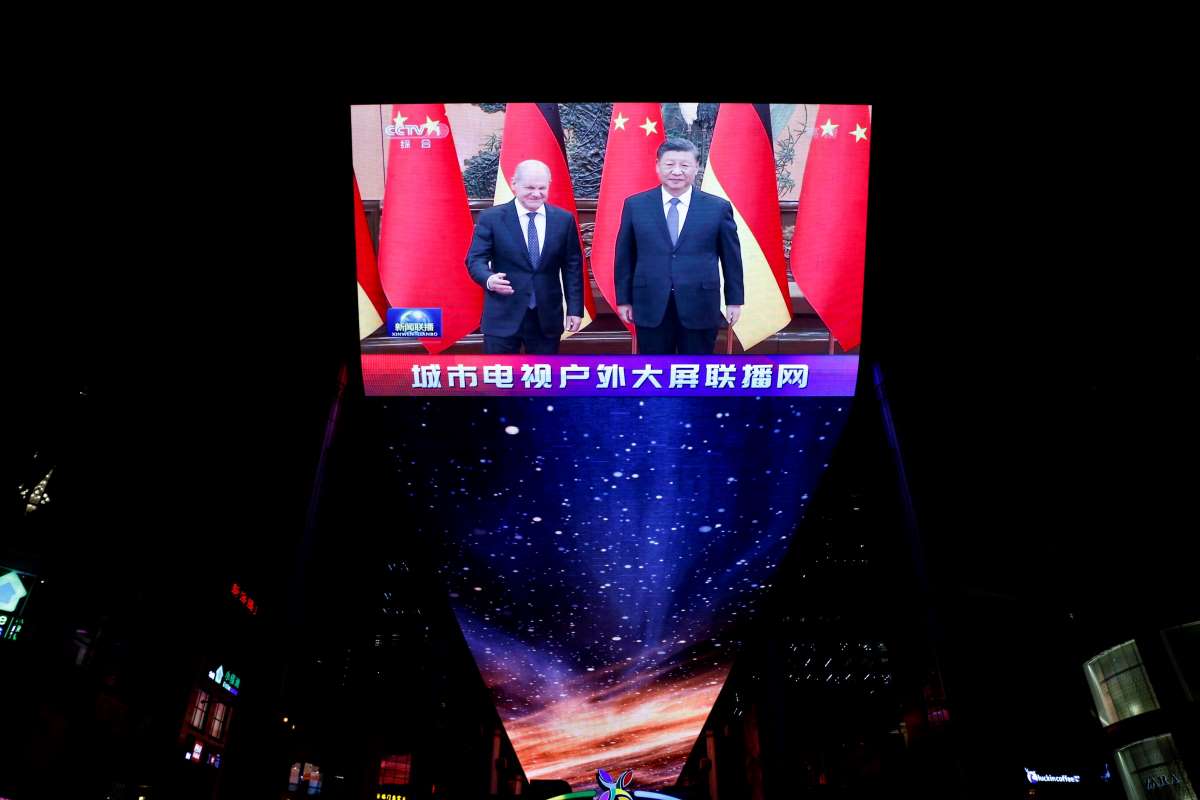 Chinese journalists were instructed by the Ministry of Publicity (Formally the Ministry of Propaganda) to present Olaf Scholz trip to Beijing as an historic event, which signaled Germany's pragmatic and business-focused approach towards China.

Official pictures were distributed of the Chancellor with Xi Jinping in the Great Hall of the People. He was the first foreign head of government to visit China since the pandemic.

Accompanying him on the short trip were the representatives of powerful German companies which have invested huge sums of money in China. The Chancellor and the CEOs told their audience that they do not want the countries to "decouple".

This was music to Chinese ears, as the Communuist Party believes decoupling is an American plot, designed to hold back China's rise.

The trip was controversial, coming soon after the 20th Party Congress in Beijing, during which Xi Jinping consolidated power and won a third term in office.

Under former Chancellor Angela Merkel, there was an aspiration on the German side that trade would be the engine of political change in China. So, is Chancellor Scholz basically holding on to the same hope as his respected predecessor? Despite China's lurch towards a more rigid form of authoritarianism?

As I look closely at the situation, I am struck at how deeply divided Germany is over China. I have noticed that this causes tension at the very highest level of government.

Yet at the same time, I have observed a strong commitment by the Germans to remain on the best possible terms with Japan and South Korea. It seems they hope that can help compensate for the problems of doing business with China.

I found a quote from Olaf Scholz in 2018, before he became Chancellor, which seems to encapsulate his view on Asia. He said that when people go to a village disco, they need to be prepared to dance with anyone in the hall. And the same goes for world politics.

The German dance with Asia takes the form of a double act.

Just a few days before the German chancellor went to China, the Federal president, Frank-Walter Steinmeier made an official visit to Japan.

Yet the president is also influential. Especially given Mr Steinmeier's position as an elder statesman of Mr Scholz's own party, the SDP, and his experience as a former foreign minister.

President Steinmeier paid a call upon His Majesty Emperor Naruhito and Her Majesty Empress Masako at the Imperial Palace. He also held political talks with Prime Minister, Fumio Kishida and members of the Japanese Parliament.

Furthermore, he attended a roundtable with German and Japanese entrepreneurs in Tokyo. That was before going on to Kyoto, where he discussed the climate crisis with students and researchers – 25 years after the signing of the Kyoto Protocol.

There was also an opportunity to see the latest research into electric vehicles at a Panasonic factory.

President Steinmeier also traveled to South Korea and had lunch with President Yoon Suk-yeol at exactly the same time as Chancellor Scholz was in China was having a meal with the Communist Party Politburo.

As president, Mr Steinmeier has a constitutional duty to be cautious about what he says about politics. Nevertheless, his views on Asia were made clear in an interview with the public broadcaster ARD.

"The lesson is that we must reduce lopsided dependencies wherever we can,'' he said. "This applies in particular to China."

Should We Talk More?

The debate continues in Germany as to whether to shun China diplomatically or keep up a dialogue. Chancellor Scholz said in Beijing that Germany is willing to exchange views in order to increase mutual understanding and to grow bilateral ties.

He also spoke bluntly on some issues. He urged China to use its influence on Russia to stop the war in Ukraine. And he claimed that both countries had agreed Russia's nuclear threats were "irresponsible and highly dangerous".

He raised controversial topics, including human rights and Taiwan in his talks with Mr Xi and outgoing premier, Li Keqiang.

"Like the United States and other countries, we are pursuing a one-China policy. But I have made equally clear that any change in Taiwan's status quo must be peaceful or by mutual consent," he said.

All this suggests that in the Chancellor's view, it would be better not to isolate Xi Jinping. He may think it would be risky to leave the Chinese leader listening only to loyal members of the Politburo, or China's friends, such as President Vladimir Putin.

Yet in my view, there is a problem with this approach. Xi Jinping appears to be filtering out the messages he does not want to hear, even if they are delivered bluntly to his face by a respected national leader.

The party's ideology is clear to readers of China Daily, a national newspaper.

In an article on Mr Scholtz's visit, the critical comments about Russia were filtered out and the human rights issue was censored. Instead, the paper quoted Ding Chun, director of the Center for European Studies at Fudan University. Ding said that Mr Scholz, as leader of the largest economy in Europe, took the initiative to visit China following the outbreak of the pandemic. This is sending the signal, he said, that Germany is willing to keep its relations with China afloat, particularly in economic and trade areas.

"Although not all issues between China and Germany could be resolved overnight through this one visit, face-to-face communication and actions to secure cooperation and dialogue are win-win for both sides," Ding Chun told the paper.

Tellingly, I could find no mention in the Chinese media of the German President's trip to Tokyo and Seoul. To return to the metaphor of the village disco, when the spotlight is on Xi Jinping, it seems all the other dancers are left in the shadows.

However, it is worth remembering that Mr Scholz' first trip to Asia after becoming chancellor was to Tokyo, where he met Prime Minister Kishida in April of 2022.

At the time, experts warned that China was trying to drive a wedge between the United States and its allies in Europe and Asia, including Germany and Japan.

That remains a danger, although I believe the Germans are alert to the risk.

This is indicated by one consistent element of their Asian policy. Every time the Germans nod respectfully towards China, they also make it very clear that Japan is a country they respect, trust and want to keep doing business with for many years to come.