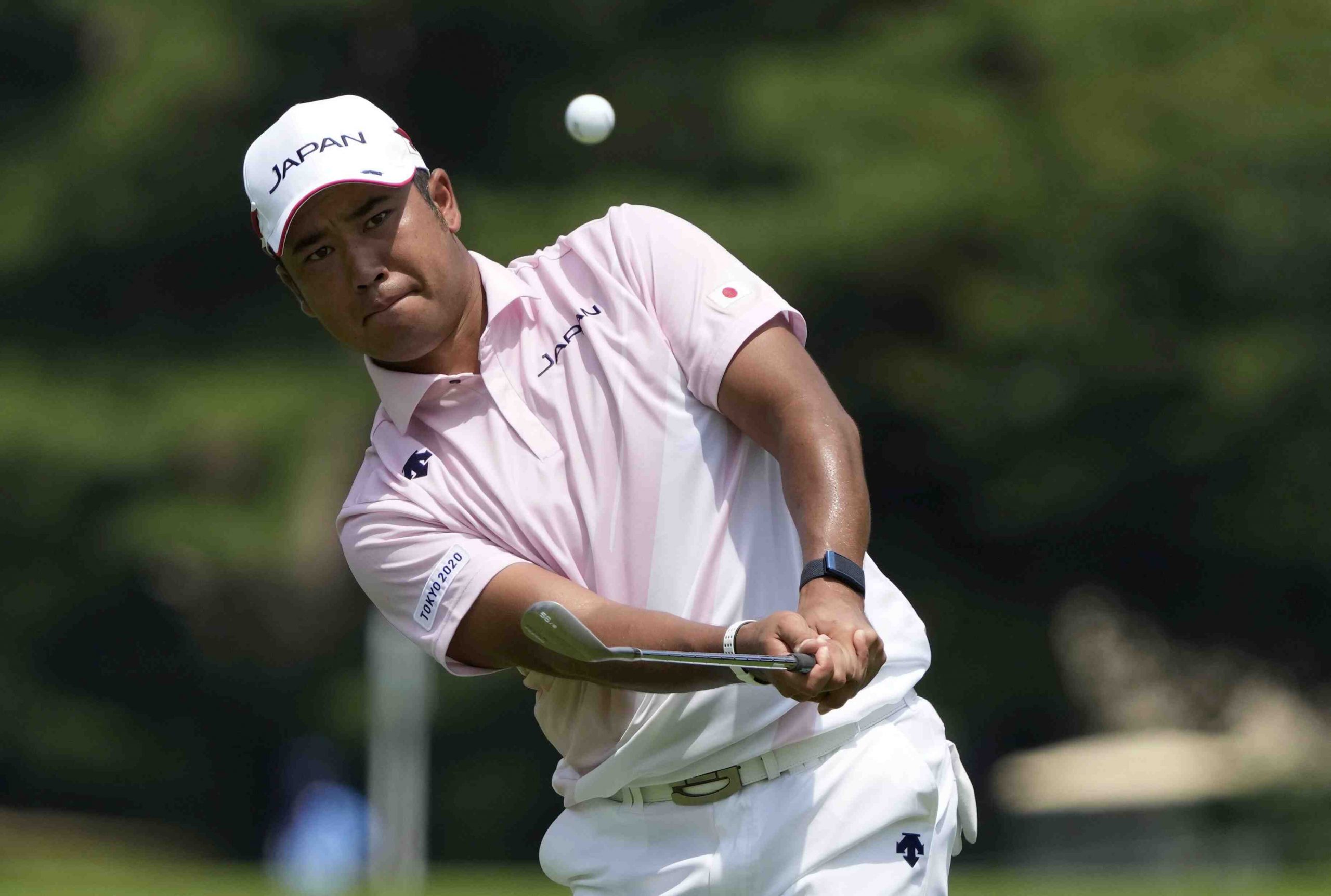 Hideki Matsuyama chips onto the first green during the third round of the men's golf tournament on July 31 in Kawagoe, Saitama Prefecture. (AP/Andy Wong)

Matsuyama Shot a 4-Under 67 in the Third Round, Pulled Within One Shot of Leader Schauffele

Looking to add a gold medal to his historic win at the Masters, Hideki Matsuyama fired a 4-under-par 67 on Saturday, July 31, to move to within one stroke of leader Xander Schauffele after the third round of the men’s golf tournament.

Because of rain, Matsuyama couldn’t finish his second round on Friday, July, 30.

He completed that round early Saturday morning when he holed a 5-foot birdie putt on the 17th hole and saved par on 18 to complete a 7-under 64 that left him two strokes behind Schauffele before starting the third round.

After a bogey on the par-4 first hole at the Kasumigaseki Country Club, Matsuyama found his rhythm and reeled off back-to-back birdies on the second and third holes.

American Schauffele, who held the overnight lead after Friday’s rain-hit second round, carded five birdies against a pair of bogeys for 68.

Matsuyama is making his first appearance in a tournament since testing positive for COVID-19 earlier this month.

The Japanese standout tested positive for coronavirus on July 2 and was forced to miss the Open Championship in Sandwich, England, earlier this month.

Matsuyama became the first Japanese to win a major tournament with his win at the Masters in April.

Great Britain’s Paul Casey moved up the leaderboard and was tied for third at 12-under 201 with Mexico’s Carlos Ortiz after a stellar 66 that included six birdies against a lone bogey.

It was a good day for the game’s bigger names. In addition to Matsuyama and Casey, Ireland’s Rory McIlroy also moved into contention. McIlroy fired a 67 and is tied for fifth at 11-under with first-round leader Sepp Straka (68), Sebastian Munoz (66), and Mito Pereira (68).

Great Britain’s Tommy Fleetwood had the day’s low score of 64 and was tied for ninth at 1-under with Ireland’s Shane Lowry.

Fleetwood carded nine birdies against a pair of bogeys.

France routed Japan in the final mixed team match for the gold, leaving Japan to take the silver medal.

Motivated by unexpected losses in the earlier days of individual competitions, France was strong from the beginning in the battle for gold on the last day of judo. It won the first two matches, with Clarisse Agbegnenou beating Chizuru Arai in the women’s under-70 kg category with two waza-ari, and Axel Clerget winning by ippon against Shoichiro Mukai in the men’s under-90 kg division.

Japan was able to take the next match, with Akira Sone beating Romane Dicko in the women’s over-70 kg category. The host nation wasn’t able to continue winning, however, with Teddy Riner (over-100 kg) overwhelming Japan’s Aaron Wolf and Sarah Leonie Cysique defeating Tsukasa Yoshida.

Team captain Shohei Ono, who didn’t compete because France had already picked up four matches, reflected after the match, “The French team was strong. I respect them. I wanted to show off my own judo, but I’m proud that our team was able to fight together.”

Japan had performed particularly strongly in the individual matches, winning nine golds out of a possible 14, in addition to one silver and one bronze. Arai, Sone, Wolf, and Ono were among the mixed team members who won gold medals in the individual rounds.

Dressel broke his own world mark (49.50) in winning the match. He previously won golds in the 100 freestyle and 4×100 freestyle relay.

Hungary’s Kristof Milak, the Tokyo champion in the 200 butterfly, was the runner-up at the discipline’s shorter distance in 49.68 seconds. Switzerland’s Noe Ponti collected the bronze in 50.74.

Milak said he was pleased with his performance.

“I am smiling, finally. It was hard, but I had a good race against such noble rivals,” Milak told reporters later.

Fellow American Katie Ledeky continued to shine in the pool at the ongoing Games, winning the women’s 800 freestyle in 8 minutes, 12.57 seconds. She had already won the 1,500 freestyle and hauled in silver medals in the 4×200 freestyle relay and 400 freestyle.

Ledecky was aware of rival Titmus’ presence throughout the race.

“I could see her the whole way,” Ledecky said of Titmus, according to The Associated Press. “I was trying to keep tabs on her and trying to inch my way out a little bit each 50. I knew she was just going to be lurking there the whole time.

Australia’s Kaylee McKeown collected her second and third medals at the Tokyo Games on the final day of the month, winning the women’s 200 backstroke (2:04.68) and helping her nation claim bronze in the inaugural 4×100 mixed medley relay (Great Britain won the race). McKeown’s sensational Olympics also includes an early victory in the 100 backstroke.

Nesthy Petecio made history for the Philippines by beating Italy’s Irma Testa in a women’s featherweight (54-57 kg) and progressing to the gold-medal match. With her participation in the final, Petecio has already secured the first medal in the sport for the Philippines

In the match, the much-taller Testa was awarded the first round, with all five judges ruling in favor of the Italian boxer. After that, Petecio changed strategy and went more defensive, with four out of five judges giving the round to the Filipina. The Davao City native rode on the advantage and concluded with a few well-delivered blows in the last minutes against the 174-cm Testa, finishing the match with a 4-1 win on points.

“It’s not for me. It’s for my family, my country and for all the people from the Philippines who have prayed for me. I love you, I love you,” said a teary Petecio to Reuters after the match.

Irma Testa also made history for her country, by achieving the bronze and the first medal in a sport which is relatively young in Italy.

Petecio will be fighting in the final against Japan’s Sena Irie, who also achieved a historic feat by narrowly beating Great Britain’s Karriss Artingstall in the semifinal the same day. Irie will go and achieve the first Olympic medal for Japan in women’s boxing.

In the semifinal match, after each athlete won a round apiece, the third round saw a split ruling. Irie prevailed 3-2 based on the judges’ scoring.

Nicknamed “the Bomber,” Artingstall was also awarded a bronze medal. She placed third in the world championships in Russia in 2019.

The 20-year-old Tottori Prefecture native is a rising star, and is nicknamed Irie Wani (Irie Crocodile). She came fifth in the world championships in 2019. Petecio, on the other hand, placed first in the world in the same competition.

The three fastest women in the world at the Tokyo Olympics in the 100-meter final were all from Jamaica, and they swept the competition by winning the gold, silver and bronze medals at the New National Stadium.

The defending Olympic champion Jamaican Elaine Thompson-Herah stormed past her opponents with a blistering time of 10.61 seconds. The 29-year-old broke American Florence Griffith Joyner’s Olympic record (10.62), which was set at the 1988 Seoul Games.

Shelly-Ann Fraser-Pryce finished second in 10.74 seconds. Fraser-Pryce, at the age of 34, was looking to win the gold again, and looked visibly disgruntled after the race.

Shericka Jackson, 27, captured the bronze medal. She recorded a personal-best time of 10.76. It’s the first time since 2008 that Jamaica repeated its historic feat of claiming all three medals in the 100.

Jamaica has defended the gold medal in this category since Fraser-Pryce made history by claiming the first gold medal for the country at the 2008 Beijing Games.

Olympic champion and Jamaican legend Usain Bolt reacted on Twitter to the news shortly after the victory.

The race started after a beautiful light display on the track at the Olympic Stadium in Tokyo.

Earlier, the Athletics category had hosted the first ever mixed 4×400-meter relay, which saw a surprise win by Poland, the top qualifying team in the heat, which finished the final with an Olympic record of 3 minutes, 9.87 seconds. Silver and bronze medals went to the Dominican Republic and the U.S., respectively.

Japan defeated New Zealand 4-2 on penalties to advance to the semifinals of the men’s soccer competition.

Captain Maya Yoshida scored the winning goal to seal victory in the shootout after neither team was able to score in 120 minutes at Kashima Stadium.

Japan is seeking its first Olympic men’s soccer medal since winning bronze at the 1968 Mexico Games. The hosts will face Spain in the semifinals on Tuesday, August 3. Spain beat Ivory Coast 5-2, thanks to a hat trick from substitute Rafa Mir.

After 30 minutes of extra time failed to determine a winner, the match went to a shootout where Ayase Ueda, Kou Itakura, Yuta Nakayama and Yoshida all scored for Japan.

New Zealand quickly took the lead, with Michaela Blyde scoring a try one minute into the first half and Tyla Nathan-Wong adding a conversion 18 seconds later.

Japan finished last in the 12-team tournament after losing 21-12 to Brazil in the 11th-to-12th place classification match at Tokyo Stadium, one of the venues for the 2019 Rugby World Cup.

Fiji took home the bronze medal, beating Great Britain 21-12. The third-place finish earned the nation its second medal of the Tokyo Olympics, the first being the gold medal from the men’s rugby sevens event.

The three-time defending Olympic champion United States men’s basketball team improved to 2-0 at the Tokyo Games with a 119-84 over the Czech Republic in a Group A evening game at Saitama Super Arena.

The Americans led 47-43 at halftime, then outscored the Czechs 35-17 in the third quarter to pull away from the underdogs.

In an earlier Group B contest, balanced scoring helped carry Italy past Nigeria 80-71

Five players scored in double figures for Italy, including Nicolo Melli with 15 and Nico Mannion with 14.

In other games, France topped Iran 79-62 in Group A and Australia defeated Germany 89-76 in Group B.

The No. 9 seed Bencic didn’t reach the quarterfinals at the year’s first three Grand Slam events (Australian Open, French Open and Wimbledon), but her breakthrough performance in Japan could be a sign of things to come for the 24-year-old.

The unseeded Vondrousova eliminated Naomi Osaka in the third round.