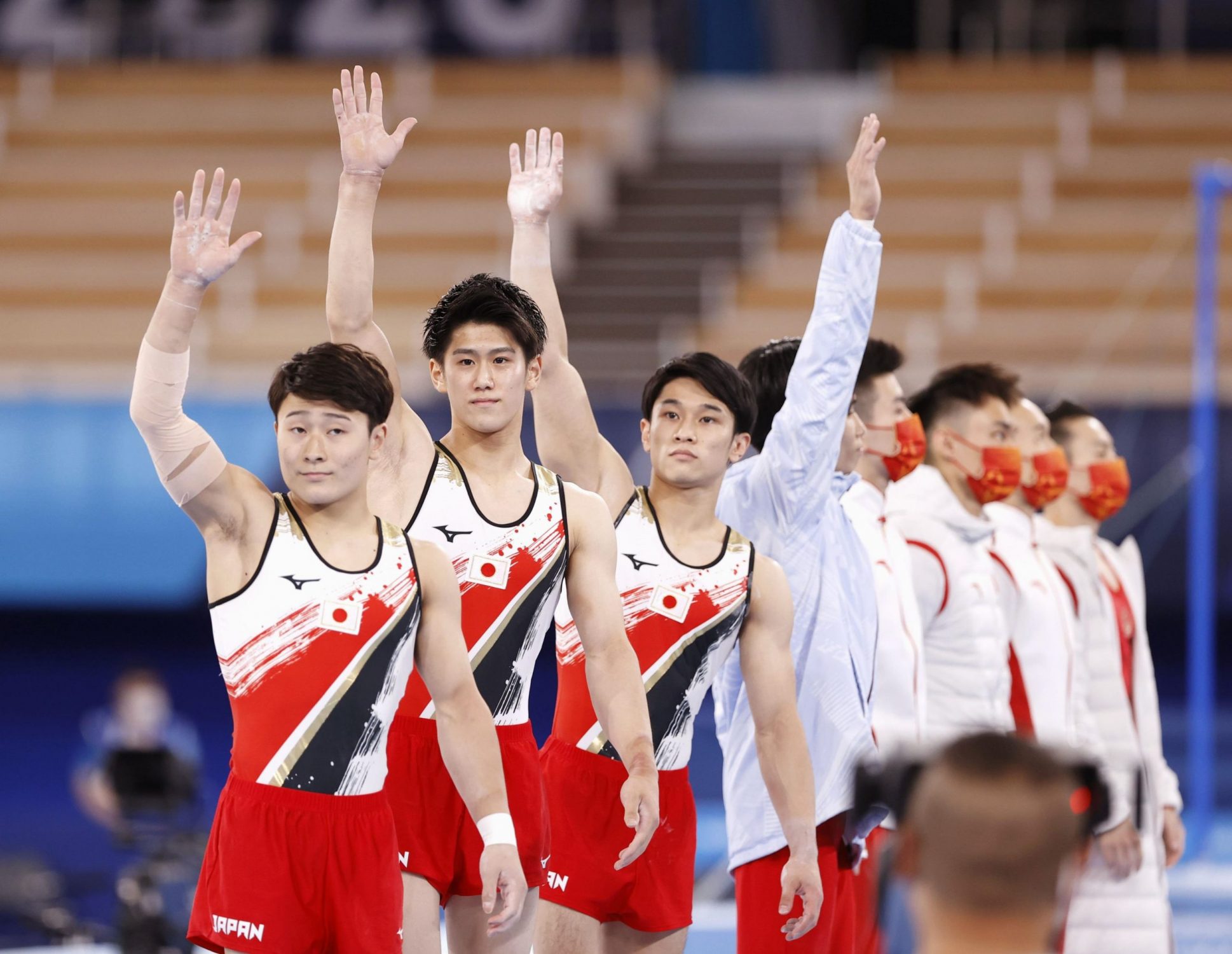 The Japan men's gymnastics team is seen before the team final on July 26 at Ariake Gymnastics Centre.

During the Olympic Games, JAPAN Forward will see the key happenings in a handful of sports during the day related to the Olympics to our readers through this Olympic Digest.

Make sure to bookmark JAPAN Forward’s page for the latest Olympic-related news from Japan!

Defending Olympic champion Japan came close to achieving a dream, inching close to another gold medal in the men’s team gymnastics final, but it failed to grab it, ultimately outdone by the Russian Olympic Committee team’s superior performance.

Based on its illustrious history in the event, Japan expects to be in contention for the men’s team crown. Japan has won a whopping seven Olympic medals in the men’s team gymnastics competition, including at the 1964 Tokyo Games and in Athens in 2004.

Going into the final the competition was fierce with top contenders ROC and China. Before the final rotation of the horizontal bar, Japan was still third behind China. Yet, with a stellar performance, Japan shaved off the difference, scoring the most points of the eight finalists on the horizontal bar (43.800). In Hashimoto’s final performance, he received a team-high 15.100 points on the bar.

Finally, however, Russia’s Nikita Nagornyy scored enough to keep the ROC at the top, by achieving 14.666 points in the floor category.

Although Japan didn’t achieve its goal of defending its Olympic title, 19-year-old Hashimoto told journalists his team can build off the disappointment for the future.

“Of course for all of us it’s also a blow,” Hashimoto commented. “However, we want to draw lessons, so that we can bring them with us at the next Games, at Paris [Olympics in 2024].”

Japan Drops Pair of Matches on First Day of Tournament

Last week, Japan men’s rugby sevens head coach Kensuke Iwabuchi named Chihito Matsui as captain to lead the team to golden glory, but the stage will be a challenging one.

Alongside Matsui, Kameli Soejima, Kazushi Hano and Lote Tuqiri all played at the 2016 Rio Olympics and returned to this year’s team with much-needed veteran support and experience for the young squad.

Japan lost to the eventual gold medalist, Fiji, in the semifinals in Rio, and the losing streak continues with a 24-19 defeat on the first day of the Olympic rugby sevens tournament at Tokyo Stadium.

Fiji’s Jiuta Wainiqolo scored a try in the opening minute, and Napolioni Baloca converted, but it wasn’t enough to demoralize the host nation team’s spirit, as Japan responded with captain Matsui opening the scoring with a try. The first half ended with Japan putting another try and conversion up on the board, and ending the first half with a 14-12 lead.

The second half started with Japan paying back Fiji’s opening try in the first half, when Soejima broke through for a try. Japan hoped to build a scoring momentum from there, but Fiji would turn the game around, scoring two more tries and a conversion to complete the comeback from behind to win 24-19. Waisea Nacuqu led all scorers with 12 points from two tries and one conversion.

Great Britain opened scoring from the first set and maintained momentum most of the first half with its strong defensive plays. The theme remained the same in the second half, as Great Britain crossed over the line for three additional tries, and blew the lead wide open, prompting Iwabuchi to sub out his key players with more than half of the time remaining.

Great Britain has yet to concede any points, as it also won against Canada 24-0.

Japan is in a difficult position to progress, pending its match against Canada on Tuesday, July 27, and the other teams in the pool.

For the host nation, the mixed doubles and men’s doubles teams had a successful day and remained undefeated after the round-robin group stage.

In mixed doubles, Yuta Watanabe and Arisa Higashino prevailed over Indonesians Praveen Jordan and MD Oktavianti, in a 21-13, 21-10 victory. The duo had already qualified for the quarterfinals at Musashino Forest Sports Plaza.

“The match was much tougher than the score would suggest and we needed to move well and have our wits about us,” Watanabe said, according to Kyodo News.

Takeshi Kamura and Keigo Sonoda, the men’s doubles team, routed their American counterparts, brothers Ryan and Phillip Chew, with 21-11, 21-3 in 27 minutes. The win was their second straight and confirmed their entry into the quarterfinals.

Kelsey Stewart hit a walk-off home run in the seventh inning off starter Yamato Fujita to lead the United States to a 2-1 victory over Japan in the teams’ last game of the opening round.

Both teams, who met in the last Olympic softball final in the 2008 Beijing Games, had already qualified to meet in the gold-medal match at Yokohama Stadium on Tuesday, July 27. First pitch is scheduled for 8 p.m.

Reigning Olympic champion Japan took the lead in the first inning, when Saki Yamazaki scored on a passed ball with two outs.

Team USA tied it at 1-1 on Valerie Arioto’s two-out single, then triumphed in dramatic fashion an inning later.

“It was fun playing America after such a long time,” Fujita was quoted as saying by Kyodo News after the match. “There was nothing on the line, so I just wanted to execute my pitches. They have a lineup filled with power hitters so I tried to keep them on the ground.”

Osaka advanced to the third round at Ariake Tennis Park with an efficient effort in a 6-3, 6-2 win over 49th-ranked Swiss player Viktorija Golubic.

“I know that I’m playing against the best players in the world and I haven’t played in a while, so of course I want to win the gold medal like everyone in the tournament does, but I’m taking it one match at a time,” Osaka was quoted as saying by Kyodo News after the match.

To win the gold, a player must prevail in six matches at the Olympics.

Osaka, the final act of the Opening Ceremony for the Tokyo 2020 Games, is now one-third of the way there.

NBA superstar Luka Doncic had a jaw-dropping 48 points in Slovenia’s 118-100 victory over Argentina in a preliminary round game at Saitama Super Arena.

The Dallas Mavericks playmaker had 31 points by halftime. He finished tied for the second-most points in an Olympic game. Australia’s Eddie Palubinskas had a 48-point game at the 1976 Montreal Games.

Brazil’s Oscar Schmidt set the record with 55 points in the 1988 Seoul Olympics.

After the Group C contest, Doncic insisted he wasn’t focused on breaking the record.

“I don’t care about records,” the 22-year-old told reporters. “We got a win and that’s what we came here for.”

“He was too good, obviously,” Scola said, according to The Associated Press.

Haneda Falls Short in Bid to Medal at Consecutive Olympics

The 34-year-old Haneda, who lives and trains in Slovakia, completed the course in 105.30 seconds, putting him in 10th.

The winner, Slovenia’s Benjamin Savsek, was clocked in 98.25 seconds, a comfortable margin over runner-up Lukas Rohan of the Czech Republic (101.96 seconds).

In the second day of competition for the men’s and women’s windsurfer (RS:X and one person dinghy laser) events, two sailors built significant leads.

In the men’s event, Kiran Badloe of the Netherlands leads with 15 points, while Italy’s Mattia Camboni and Switzerland’s Mateo Sanz Lanz are second and third with 16 and 20 points, respectively.

Eleven people in the event, including Japan’s Makoto Tomizawa, did not finish the fifth race, dropping Tomizawa from 13th to 16th place.

In the women’s windsurfing event, France’s Charline Picon leads with 14 points after the races, followed by Emma Wilson from Great Britain (also 14 points) and Yunxiu Lu from China (16 points). Japanese sailor Yuki Sunaga is now in 10th place, an improvement from 18th place on July 25.

The second and third races of the men’s one-person dinghy event was held in Enoshima. Current standings show Kaarle Tapper from Finland in the top spot and Kenji Nanri in 31st.

After the third and fourth of 10 races in the women’s one-person dinghy event, Norway’s Line Flem Hoest leads and Manami Doi is 13th.

The match was by no means a guaranteed win, as Garozzo was the incumbent in the category, having won gold men’s foil in Rio de Janeiro in 2016.

“I told myself, ‘I am nothing against him, he is the Olympic champion.’ I just kept fighting until the end,” said Cheung at Makuhari Messe in Chiba Prefecture. “It is like a dream. For me, yesterday I was thinking about the first match. The most important thing about the games is the first match.”

Sicilian-born Garozzo had also previously stopped Japan’s chase for the medal, by beating a solid Takahiro Sekine 15-9 in the semifinal.

In the final, the 28-year-old-Italian kept a steady point count with Cheung. But then Garozzo lost his advantage to 24-year old Cheung.

Garozzo also seemed to lose concentration due to pain in his thigh, with the physiotherapist attending to him during the break. The Italian kept at it, and managed to recover the point difference until reaching 9-10. After a couple of rounds of each athlete scoring alternatively equal points, Cheung brought home his victory by scoring the final two hits to achieve the win.

Reflecting back on the match, Garozzo voiced his disappointment. “Unfortunately, it wasn’t my best fencing tonight, and my opponent was one of the best tonight.”