Predictions 2023: After Unification Church, Will Religion be the Opium of the People? 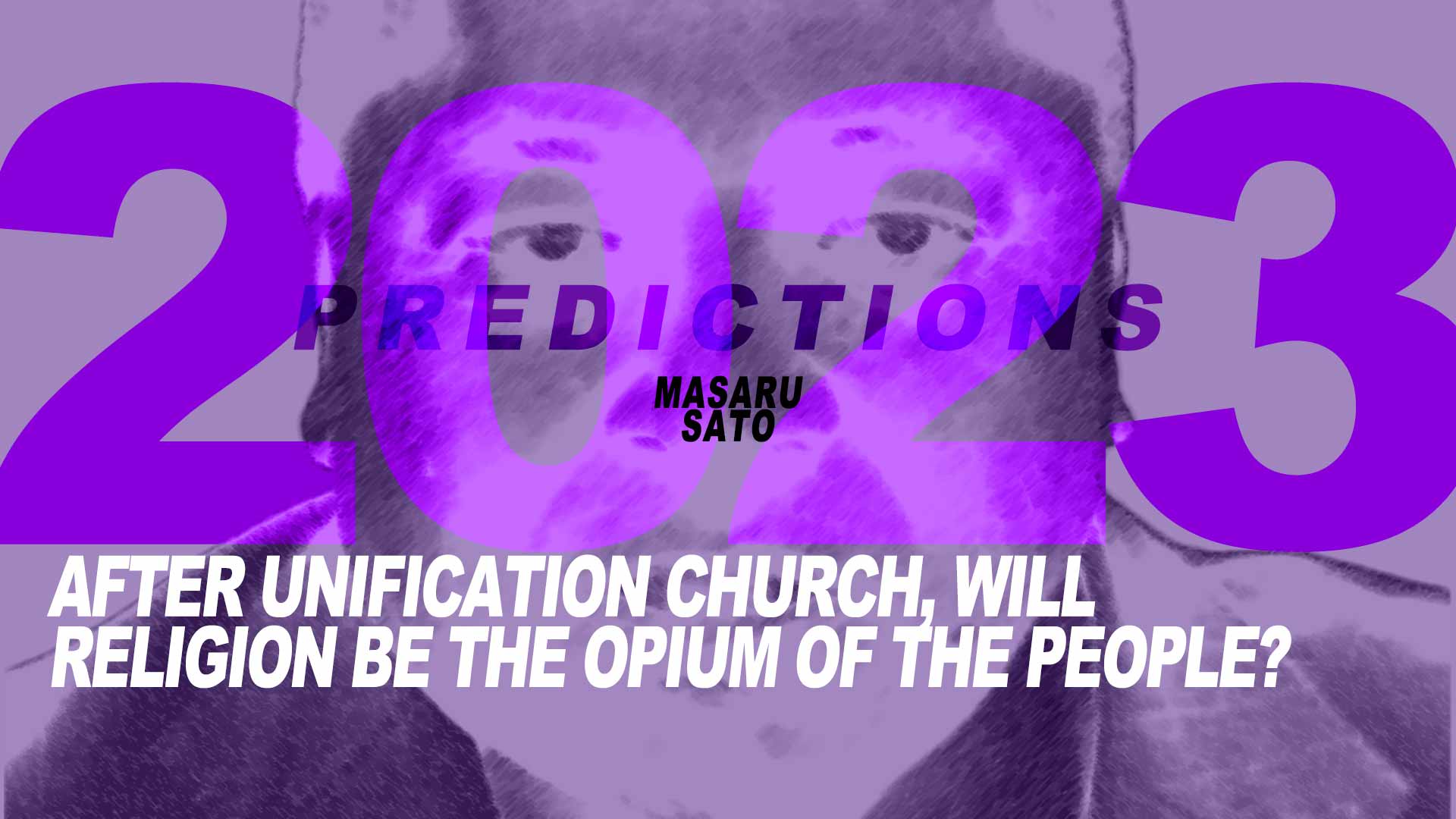 The assassination of former Prime Minister Shinzo Abe in July 2022 drastically altered the Japanese political and social perspective of religion. Predictions are that this event will continue to impact Japanese society and religious institutions in the year ahead.

It was reported that Abe's assassin was motivated by a strong resentment toward the Family Federation for World Peace and Unification, known as the Unification Church. Needless to say, the group was condemned for its specific illegal acts and extreme deviation from social norms.

But contempt and ridicule toward those who live by religious values has also intensified. Accusations that associate religion with brainwashing are particularly concerning.

I studied organizational theology at the undergraduate and graduate levels at Doshisha University. While I identify as a Christian of the protestant denomination, my theological studies are still ongoing.

The Catholic, Protestant, and Orthodox churches all believe that Jesus was born of a virgin, was crucified, buried, and resurrected three days later. Obviously, this belief goes against science. In a sense, Christians are "brainwashed" to believe in the virgin birth and resurrection of the dead.

The Soviet Union certainly thought so. The state banned religious education in the home. State education emphasized that parents must not teach children beliefs that contradicted scientific evidence. In other words, the communist regime tried to eradicate shūkyō nisei, or children influenced by the teachings of their parent's religious beliefs.

Predictions: The Opium of Unenlightened People

However, religious families used various means to pass down their faith. After the collapse of the communist regime, religion revived in the 15 socialist republics that made up the former Soviet Union.

The Japanese mass media's current perspective of religion is reminiscent of the scientific atheism of the Soviet Union. In the Soviet era, the regime forced students to memorize the words of Karl Marx as part of their school curriculum. The words were taken from Critique of Hegel’s Philosophy of Right:

Religious suffering is, at one and the same time, the expression of real suffering and a protest against real suffering. Religion is the sigh of the oppressed creature, the heart of a heartless world, and the soul of soulless conditions. It is the opium of the people.

It seems people working for mass media organizations, certain members of the Diet, and some lawyers believe that religion is a superstition. They think religious beliefs are held by backward-looking, unenlightened people. Their "superstition" should be kept private and have no part in political activities, they think.

But even in these dark times, there is light. The Japanese philosopher Kojin Karatani released his book Chikara to Kokan Yoshiki (Iwanami Shoten) in October 2022. (The title means literally, power and modes of exchange.) It is an important piece of work that sheds new light on how we should think about religion.

Karatani is a philosopher and literary critic. He came to prominence in the world of thought and philosophy with his book Marx: Towards the Centre of Possibility (1978). After a thorough examination of materialism, he came to appreciate religious values.

Karatani analyzes the structure of world history in terms of four modes of exchange. They are:

A. Reciprocity (gifts and gifts in return)

B. Obedience and protection (plunder and redistribution)

D. Restoration of 'A' in a higher dimension

Reciprocity is typically seen in clans or tribes. Meanwhile, one can find the exchange of obedience and protection in social contracts. And commodity exchanges refer to capitalism. But Karatani's ideal society is "D," where reciprocity of a higher dimension is the social norm.

He writes, "Historically, in the case of the Christian church, 'God' worked more like the head of state power. However, it cannot be denied that the possibility of 'D' could be lurking somewhere within, or that it may appear in the future. And its aspects vary depending on the era and denomination. The same is true, to a varying extent, of other world religions as well."

Karatani describes a society under the exchange mode "D" in specific detail. It is a society in which people can live with their fellow citizens with a sense of community, enjoy modern material prosperity, and maintain order.'

Soka Gakkai, for example, calls itself a world religion. But its philosophy reflects some aspects of "D," restoration of a higher dimension. World religions such as Christianity, Buddhism, and Islam, and other religions such as Judaism and Shintoism, have the potential to reflect "D". Similarly, I believe that the concept of Takamagahara in Japanese mythology also embodies some aspects of this "D."