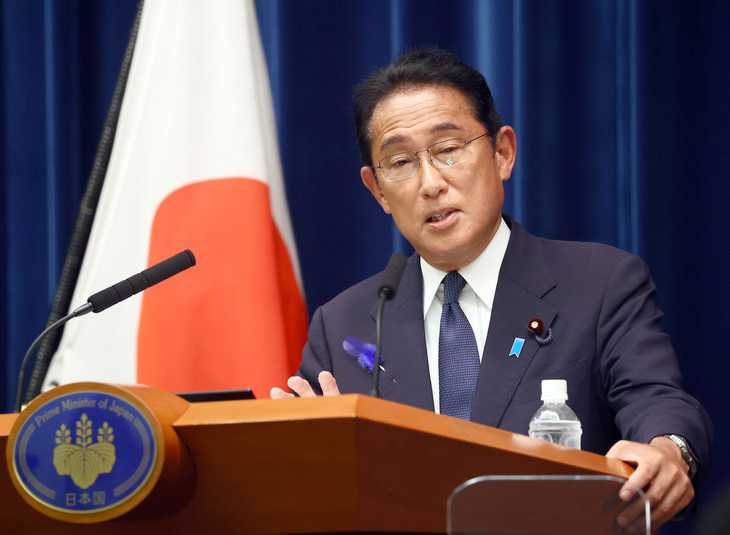 PM Fumio Kishida speaks at the first meeting of the GX Executive Committee to promote startups. On the right is Koichi Hagiuda, Minister in charge of GX implementation promotion. July 27, 2022, at the Prime Minister’s residence. (Photo by Ataru Haruna)

PM Kishida has suffered symptoms such as coughing and a fever since Saturday evening, August 20. Upon taking a PCR test the following day he was found positive for the virus. This is the first time a Japanese prime minister has been diagnosed with COVID-19.

On Sunday, August 21, the Prime Minister was recovering at the official residence while still presenting symptoms.

Kishida had just received the fourth dose of the vaccine on August 12.

A recovery time of 10 days, until August 30, is expected. Kishida’s return to online meetings is anticipated as early as August 22, however, according to sources close to the Prime Minister who spoke to The Sankei Shimbun.

There are no plans for an acting prime minister during Kishida’s recovery.

PM Kishida was scheduled to travel abroad from August 25, but those plans are being scrapped.

From August 27 to 28 he was expected to fly to Tunisia to participate in the Eighth Tokyo International Conference on African Development (TICAD 8). He was planning to visit the Middle East on the same trip, but that has been postponed.

Two people have been deemed close contacts to PM Kishida for purposes of vulnerability to COVID-19. They are the first lady Yuko Kishida, and their eldest son Shotaro, who also works as the Prime Minister’s secretary.

Kishida was on summer vacation when he was diagnosed with COVID-19. After attending the ceremony for the National Commemoration of the End of the World War II at the Nippon Budokan on August 15, Kishida joined his family to play golf on August 16 and traveled to an onsen ryokan (hot spring inn) in Izunokuni, Shizuoka Prefecture, from August 17 to 19.

The Prime Minister returned to his official residence on August 20 and was scheduled to fully return to work on August 22 when he was diagnosed.