A total of 22 North Korean athletes will be allowed to compete in 10 events of three sports: ice hockey, skiing, and skating. Excluding a figure skating pair, the North Korean athletes have not qualified to participate in the Olympics. Japanese and other participants in the Games have criticized the decision as unfair.

A joint North-South team for women’s ice hockey is to be organized, including 12 North Korean players. The North Korean players all failed to get through the international competition qualifying rounds, a requirement for all the other teams. Yet, an exception has been made to allow them to take part in the Olympics, embarrassing the coach and members of the South Korean team who worked hard and survived the international eliminations on their own merit.

The Moon government came under fire in South Korea as well for other indulgences it arranged for the North.

“A country may haul down its national flag only when it surrenders to enemy forces or when the country ceases to exist. Those who [want to] prohibit South Korean athletes from having their national flag at the opening ceremony of the Pyeongchang Olympics being hosted by South Korea should be suspected as traitors to the country. The ban should be interpreted as an attempt to diminish the status of the Republic of Korea (South Korea), which achieved the world’s most impressive success in the 20th century, to that of the North Korean regime, which is like a crime ring operating against humanity.”

North Korea clarified its intentions regarding the Pyeongchang Olympics through comments delivered by dictator Kim Jong-un during his 2018 New Year address.

“As long as this unstable situation, which is neither wartime nor peacetime, persists, the North and the South cannot ensure the success of the scheduled [Olympic] events, nor can they sit face to face to have a candid discussion over the issue of improving bilateral relations, nor will they advance straight ahead toward the goal of national reunification,” Kim said.

The remarks is a threat, implying that North Korea will disrupt the Pyeongchang Olympics, if Seoul continues to join Washington in containing Pyongyang.

“The South Korean authorities should respond positively to our sincere efforts for a détente, instead of exacerbating the situation by joining the United States in its reckless moves for a North-targeted nuclear war that threatens the destiny of the entire nation as well as peace and stability on this land,” Kim added.

Kim, thus, called on South Korea to distance itself from the United States and refrain from using military pressure to stop North Korea’s nuclear missile development, while also urging cooperation with the North in countering the United States.

The Moon regime responded to Kim’s New Year message by proposing special concessions to allow North Korea to participate in the Olympics. Taking up other aspects of Kim’s New Year’s threats, a South Korean newspaper reported that Seoul had refused a U.S. nuclear submarine’s planned port call at Busan for the reason the city is close to the Olympic site. These actions by themselves represent a grave betrayal of the interests of South Korea and its allies.

We must closely watch to see if the Moon regime will retreat further from its international obligations by scaling down joint military drills with the U.S. after the Olympics or through providing economic aid to North Korea in violation of United Nations’ sanctions. 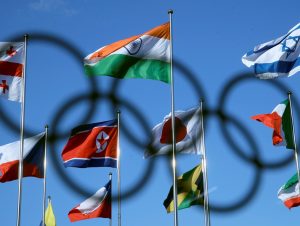 Tsutomu Nishioka is a member of the planning committee at the Japan Institute for National Fundamentals, and visiting professor at Reitaku University. This article was first published under the “Speaking Out” series of the JINF.