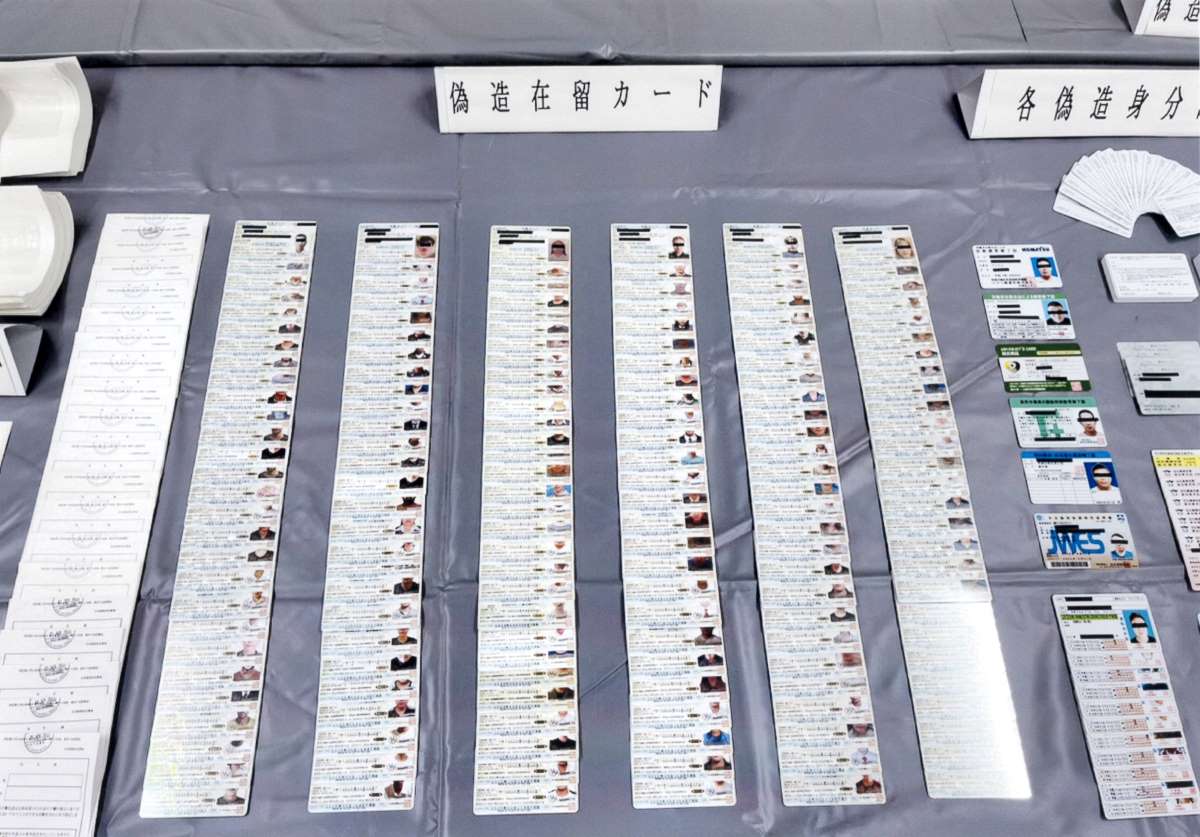 Police investigating counterfeit documents uncovered a group of Chinese nationals operating under directions coming from a headquarters in mainland China. The operation was mass-producing forgeries of the official documents to fill around 20,000 orders.

Their operation comes just as hiring for manufacturing in Japan is gearing up to take advantage of historic depreciation in the value of the Japanese yen.

One of the Largest Illicit Manufacturing Operations

Three computers, two printers, and roughly three thousand plastic sheets. This is what Metropolitan police investigators carried out of a home in Asahi City, a rural district in Chiba Prefecture, in early September.

This house was actually a forgery mill illegally manufacturing fake residence cards that look like those issued to foreigners by the Immigration Bureau authorizing long-term stays in Japan. Japanese driver's licenses, health cards, and other valuable official documents were also being fabricated.

Suspecting the group of engaging in a forgery operation, a combined force of police departments of 6 prefectures, including the Tokyo Metropolitan Police, cooperated in the investigation. They arrested six men and women, including Chinese nationals Zhiqiang Shen (30) and Guoqiang Wen (32), on suspicion of violating the Immigration Control and Refugee Recognition Act.

"It was one of the country's biggest illicit manufacturing groups," said the lead investigator. "There has never been an organized crime bust of this magnitude before."

While the group sold directly to a few foreign students in Japan from countries like Vietnam and Indonesia, most of their sales were to brokers. Doing business in groups on the Chinese app WeChat, the brokers sold the forged IDs to a wide number of students. They also received orders through word-of-mouth.

Although the forged documents were aimed at foreigners studying in Japan, the business was managed out of China, where the group's headquarters were located. So the full story hasn't been unraveled yet. Shen and Wen were subcontractors in Japan, using their home in Chiba Prefecture to create the forgeries.

In Japan, the business of forging IDs like residence cards tends to be run by foreigners with large sales networks, rather than by Japanese. Of the six people arrested, however, one was a Japanese man who was said to be giving advice on details in the workmanship of the cards.

Police have confirmed that the fake residence cards were used illegally to get jobs, buy phones, and more in various prefectures.

More than just residence cards were forged by the group. In a house search, investigators found 7 Japanese driver's licenses, 19 health insurance cards, and 5 "My Number" identification cards, all counterfeit.

Because driver's licenses are a highly trusted form of photo identification, getting one has many merits. Including job-related benefits. Police are engaged in an ongoing investigation into misuse of the forged driver's licenses and health insurance cards.

To prevent the use of such forgeries, the Immigration Bureau of Japan has developed a residence card reading app that reads the IC chips embedded in residence cards. Companies and other users can use it to confirm whether the residence cards are valid or not, without the necessity of requesting verification from an official body.

The Immigration Bureau is requesting that the app be used with the consent of the card owner.

Use of the app has not yet permeated society. However, as the lead officer of the investigation team emphasizes, "Illegal residency becomes a hotbed for various crimes. And we want to crack down on each case."