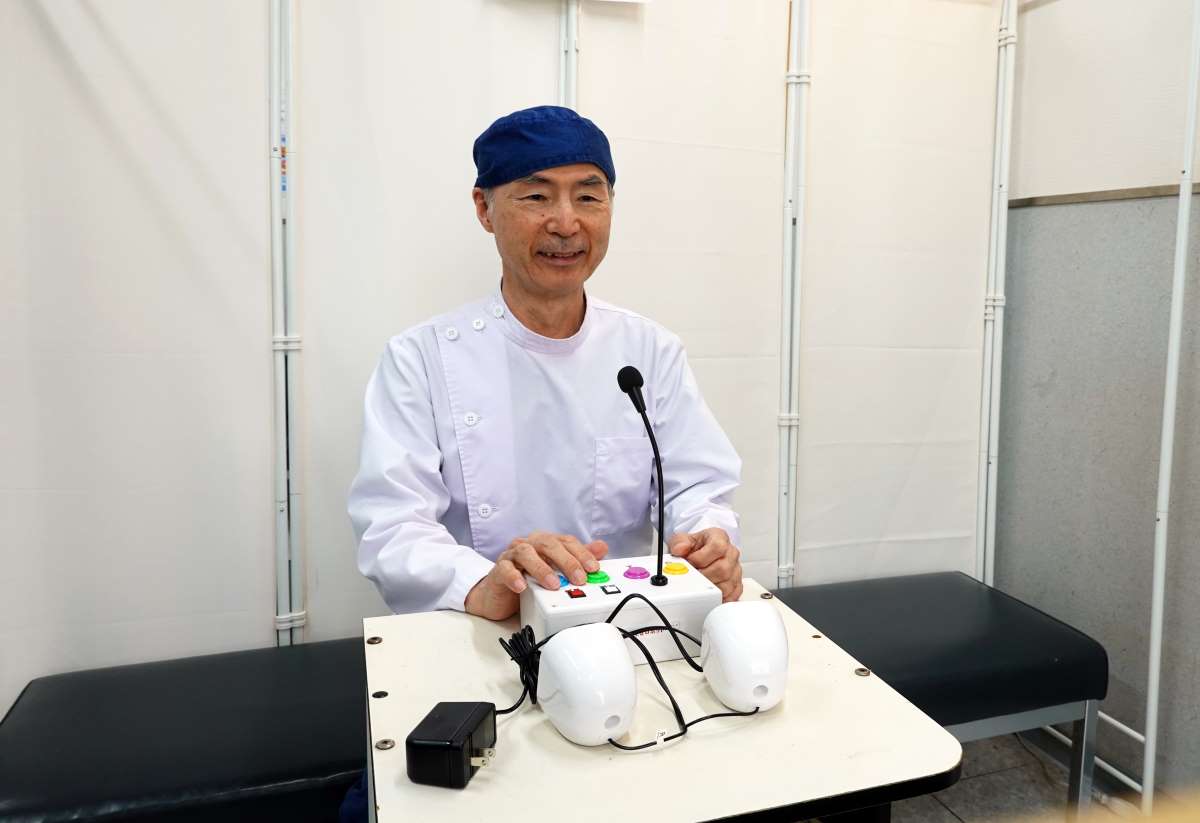 Dr Satoshi Tsujikawa who is demonstrating the operation of a Comfort Robot. Robots are proposed as solutions to the problems of elderly citizens living alone or in caregiving facilities. Kadoma City, Osaka Prefecture.

With the aging of the population and the shift toward nuclear families, many elderly people feel lonely and anxious, living in nursing homes or alone in their homes. Normal social interactions have also decreased due to the COVID-19 pandemic.

Against this backdrop, the development of robots that can heal people is advancing from a variety of perspectives. RIKEN, Japan’s largest comprehensive research institution renowned for its work across a diverse range of scientific disciplines, has developed an android that can make human-like facial expressions and is looking to use it in nursing care settings.

Meanwhile, doctors in Osaka put a robot to practical use in February 2022 that can talk to elderly people living alone to ease their worries.

Can robots relieve the loneliness and anxiety of the elderly?

Android robots, which look very much like humans, are being tested in stores to provide customer service. However, more is needed if robots are to empathize with and comfort the hearts of the elderly. It is essential that they be able to convey emotions using facial expressions, and that can be accurately understood by others.

“In the nursing care field, research has focused on robots that provide physical support, such as helping an elderly person change clothes. But there has been little research on robots that provide emotional support, such as empathy and consolation,” says Wataru Sato, leader of the Psychological Process Research Team of the RIKEN Guardian Robot Project.

Sato and his team have developed an android named “Nikola” that can precisely reproduce the movements of human facial muscles for six basic emotions: anger, disgust, fear, happiness, sadness, and surprise.

The team conducted an experiment to verify whether these facial expressions could be correctly recognized by people who saw them.

In the experiment, 30 general participants were shown pictures of Nikola expressing the six emotions. The results confirmed that all the emotions were identified appropriately.

They also conducted an experiment in which the participants were shown videos of Nicola expressing the six emotions on his face at various speeds and were asked to evaluate how natural his facial expressions were. It proved that speed affects facial expressions in the same way as it does in people. For example, the faster the expression of surprise, the more natural it seems.

The joint research team announced in February that it was “the world’s first example of an android demonstrating that it can express emotions in the same spatial and temporal patterns as humans.”


Next Challenges: Voice and Touch

RIKEN has six teams, including the Psychological Process Research Team involved in this research, working on the development of robots that can assist people autonomously. The research on the android Nikola is part of that effort. “This is just basic research,” said Sato, “but we hope to conduct further research and apply it to the nursing care field.”

A Robot that Talks with Distressed Elderly People

Meanwhile, Dr Satoshi Tsujikawa is the 70-year-old director of an otolaryngology clinic (a medical specialty concerned with the ear, nose and throat parts of the head and neck) in Kadoma City, Osaka Prefecture. His team has developed a robot that offers solutions to the worries and loneliness of elderly people who live by themselves.

“Satoshi-kun” is the “Comfort Robot,” which Tsujikawa and Yukio Honda, a research fellow at the Research into Artifacts, Center for Engineering at The University of Tokyo, have developed together. It has only a microphone, buttons, and a speaker, and is not capable of human-like facial expressions. However, Tsujikawa says, “this is an unprecedented robot that provides useful information to the elderly, depending on the situation.”

Satoshi-kun interacts with people through the use of four buttons. When you say “hello” to the robot, the robot responds and says “hello.” That starts a question and answer session. The robot then asks the human whether or not they have any worries. And if they do, it wants to know what kind of worries.

The respondent then answers four questions about (1) themself, (2) their family and relatives, (3) other people around them, and (4) other problems by pressing the buttons. Satoshi-kun then will suggest ideas and thoughts that may help you solve the problem.

For example, if you select “I haven’t heard from my children at all” or “I feel disconnected” and express loneliness, Satoshi-kun may respond by saying, “People today have a lot on their minds, no matter how healthy they may seem. I have a feeling that few people have enough energy left to contact their parents as often as they might like. What do you think?” You may feel less lonely by thinking differently, that the connection is not broken but that your children may be too tired to contact you as often as they’d like.

Development of an ‘Indispensable Robot’

The approach presented here is the optimal solution that Dr Tsujikawa has identified through years of accumulated knowledge from interaction with the elderly.

For 10 years starting in 2011, Dr Tsujikawa participated as a volunteer for the Kadoma City Medical Association, making regular phone calls to elderly citizens living alone and asking about their current condition. In addition to his approximately 15,000 interactions with senior citizens, he also conducted a survey of 6,000 people. He has accumulated and compiled data on what kind of loneliness and worries plague the elderly living alone, and what kind of counseling would help relieve their worries.

The robot asks questions in about 1,000 patterns and provides responses in about 20,000 patterns. “We hope that people will use the robot when they feel physically or mentally weak, or when they are sick or injured,” says Dr Tsujikawa.

Once the robot is ready, it will be available for about ￥30,000 JPY ($220 USD). At the same time, the development team is offering a free one-month trial to those who wish to try it, and the team plans to continue making further improvements.

Honda, who also serves as senior advisor in charge of nursing care robots for the Ministry of Health, Labor, and Welfare, says, “What’s important in robot development is to consider not only the technology but also the users. The main feature of this robot is that it uses Dr Tsujikawa’s data to put itself in the users’ shoes and be there for them.”

“The number of elderly people who need care will continue to increase, but the number of caregivers will decrease,” Honda notes. “In order to solve the manpower shortage, we need to develop robots that are ‘indispensable’ rather than just ‘nice to have.’”