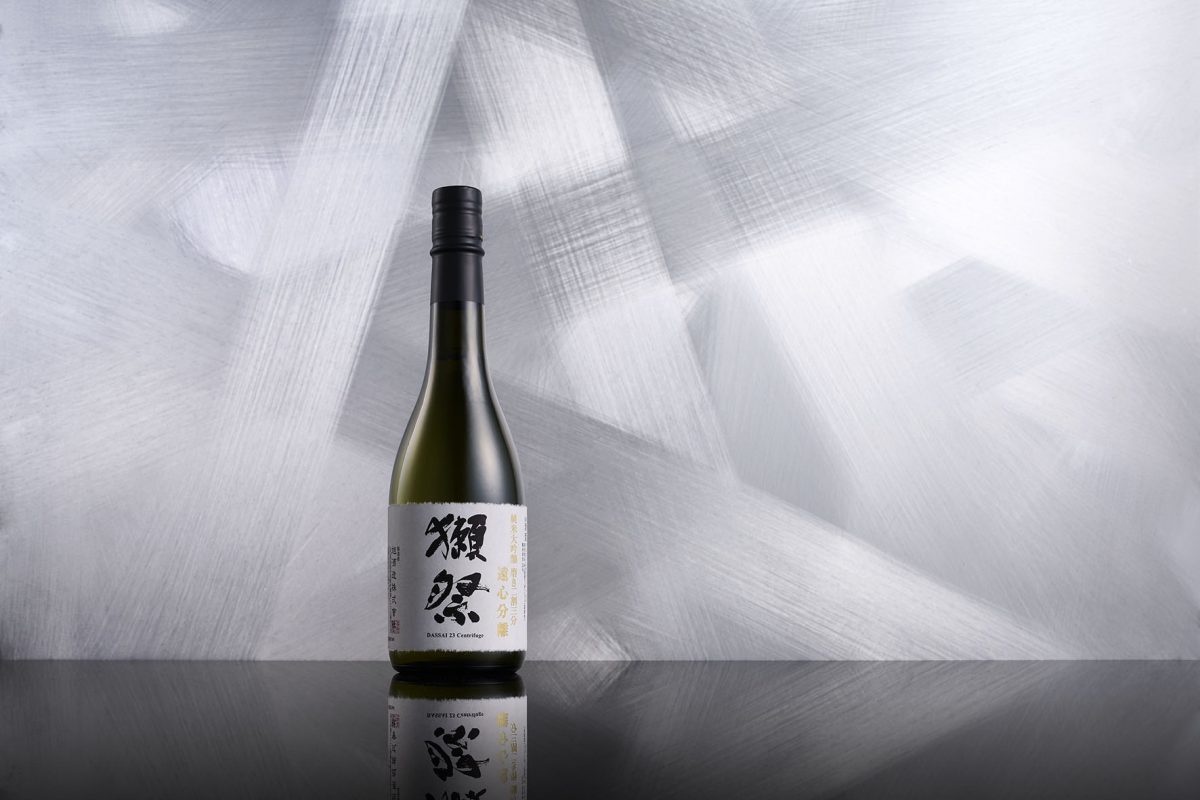 Using centrifugal mixing technology, the company aims to create sake without pressing the rice. The method is said to help the rice release a delicate yet rich flavor.

The company invited the media to experience the new product paired with seasonal Italian cuisine at the Armani/Ristorante in Ginza, Tokyo on June 23.

Tasting the Dassai 23 Centrifuge was a delight. It produces an explosion of delicate aromas and smells, and is a product that goes well with fish, meat, seasonal vegetables and much more.


CEO Sakurai Talks About the Process

CEO Kazuhiro Sakurai told reporters on June 23 there is a tendency of using technology to mass-produce and reduce manual labor, but he doesn’t believe that machinery is what is necessary to improve a product.

“There are things that machines can’t do. It’s a question of making the most of the technology and going to the next stage,” he said, pointing to the temperature control during the fermentation, the work in many batches of the product, and the need for qualified staff able to support the process.

The craftsmanship and high quality of flavors are perhaps reflected in the price tag of the product. A 720 ml bottle will cost ￥16,500 JPY ($122 USD), when the the brand goes on the market in July.

The number 23 refers to the signature Dassai polishing ratio of the rice (23%) which the company website says is “probably the most polished rice in Japan.”

The new centrifuge element adds another layer to the product, as CEO Sakurai said: “We think that making sake means constantly evolving and adapting, and I would be very happy if as many people as possible tried it.”

This is yet another step in the company’s history of pioneering in the field.

Asahi Shuzo is a family-owned sake-producer in Yamaguchi prefecture that has been around since 1948. When Hiroshi Sakurai – chairman and father of the current CEO – inherited the operation in 1984, it consisted of a single one-floor building.

He dreamt of bringing the family’s sake to Tokyo and then taking it abroad, and thus the brand Dassai was born. Challenging norms with ideas, for example, of becoming “the most polished sake in Japan,” it is now one of the most successful sake enterprises in the world.

Among the company innovations is a collaboration with the Paris restaurant of Michelin-star Chef Joel Robuschon. Back in Asia, in 2020 a bottle of Dassai’s brand Beyond the Beyond sold at Sotheby’s in Hong Kong for the equivalent of $8,000 USD.

Next up the company will kick off its first brewery in the United States in late 2022, producing the new brand, Dassai Blue. The brewery is located in the town of Hyde Park, New York, about two hours north of the Big Apple by car.

“The brand name comes from a Japanese proverb: ‘Although blue dye comes from the indigo plant, it [the dye] is bluer than indigo,’” says Asahi Shuzo spokesperson Eri Chihara.

The message is that the company’s American brand Dassai Blue might be derived from the original Dassai, but it is expected to produce at least as high-quality sake as its mother brewery in Japan.

Fumiya Miura is the Sake Brewery Manager at Dassai and he will be headed to oversee the new US branch. At just 33-years-old he already is a key member of the company. First inspired to start making sake in high school after hearing a talk by Hiroshi Sakurai, he’s been with the company ever since he graduated from university.

Considering his upcoming move to the United States, Miura confesses that he feels some anxiety. But, he adds happily: “Honestly, what I am most excited about is making good sake, and being able to go to a restaurant and see our sake sold there.”

Miura’s enthusiasm is infectious, and perhaps indicative of the company’s culture. Its success is attracting notice. Despite a labor shortage, the company has brought 17 new employees on board in the spring of 2022 ー many of them moving from other regions in Japan to produce the renowned Dassai sake.

Earlier in 2022, the company announced that it has proudly entered into a partnership with the New York Yankees, the major league baseball team with the most successful record so far this season, according to MLB.com.

All in all, it seems that Dassai is just poised for new adventures and successes going forward.