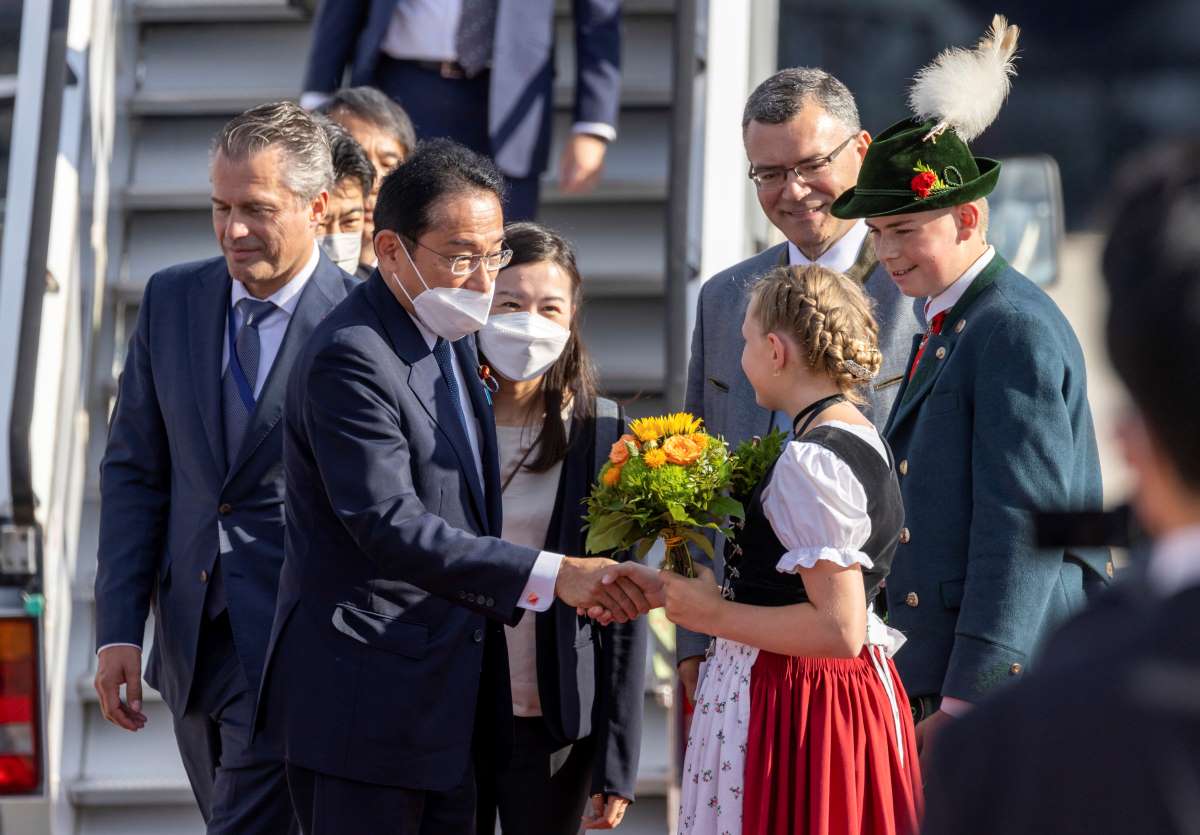 Japan's Prime Minister Fumio Kishida, front left, receives a bouquet of flowers from a girl in traditional costume upon his arrival at the Munich international airport in Munich, Germany, Sunday, June 26, 2022. (Daniel Karmann/dpa via AP)

Recently in Europe the level of interest in Japan has become astonishingly high. One reason is that, as a result of Russia’s invasion of Ukraine, Europeans are now earnestly debating how they should respond if there is a Taiwan crisis.

During a forum hosted by a major French diplomatic think tank not long ago, experts on Asia and defense issues posed questions like the following: “How will the Japan-US alliance respond if the Taiwan Strait is blocked?” and “What kind of coordination can take place between Europe and Japan?”

Prime Minister Fumio Kishida recently pledged that Japan would raise defense spending by a “substantial amount.” Not long ago, that statement would have elicited a chorus of criticism from the European media that “Japan is increasing tensions in East Asia.” But nowadays no one seems to be warning about Japan.

I had a chance to speak recently with former central editor in chief Pierre-Antoine Donnet of the Agence France-Presse (AFP), the French global news agency. Donnet, who served stints as a foreign correspondent in Beijing and Tokyo, is an acknowledged China expert and has authored several books, including Chine, le grand prédateur (China: The Great Predator).

We met in a café frequented by left-wing intellectuals, where Donnet told me: “If the United States were to provide Taiwan with military assistance as it has done for Ukraine, the US military bases in Okinawa will certainly be targeted by China. That being so, Japan must of course be prepared.”

While tilting back his beer glass, Donnet said with a laugh: “I certainly wouldn’t have said this a few years ago, but this conflict [in Ukraine] has brought together the threats from Russia and China and changed the world.”

He also explained that since the European countries had already adopted a target of spending 2% of GDP on defense, there is “no problem” to increasing expenditures to that level.

Change in Germany is the big reason for the way that Europeans now look at things. In the wake of the Ukraine invasion, Germany quickly agreed to up its defense budget to 2% of GDP and has begun to increase its armaments.

Following World War II, Germany championed pacifism and “reflecting on Nazism,” which made the mere suggestion of expanding the military taboo. However, following the attack on Ukraine, Germany became heavily criticized for not providing Kyiv with adequate military assistance.

In the forefront of the critics were the three Baltic states (Lithuania, Estonia, and Latvia), all of which suffered under Nazi occupation. In the postwar period, Germany became heavily dependent on the United States for its security. It has been similar to Japan in that respect.

The French news weekly Le Point has argued that the rearming of Germany and Japan, both losers in World War II, is symbolic of the radical change in the world caused by the invasion of Ukraine.

If Japan and Germany do indeed raise defense spending to 2% of GDP, then Japan will have the third largest military in the world — after the United States and China — and Germany will be No. 4. That would cause drastic change in the military map of the world.

Le Point went on to say that even so this would be no cause for concern since “with China and North Korea turning the region into a powder keg, a strong Japan is essential to stability in Asia.”

No vestige of talk of Japan as a threat there.

In the more than seven decades since the end of World War II, the view that Germany and Japan are democratic and peace-loving nations and therefore trustworthy has taken root.

Instead, today the world is facing rising threats from China, Russia, and North Korea. Rather than worry about any supposed threats from Germany and Japan, Europe is far more interested in having the two democracies “contribute to security.”

At the end of June, Prime Minister Kishida will become the first prime minister of Japan to attend a North Atlantic Treaty Organization (NATO) summit. In fact, the leaders of four democracies in the Asia-Pacific region — namely Japan, South Korea, Australia, and New Zealand — will be in attendance.

The meeting will discuss how NATO and its partners should stand up to authoritarian Russia and China. In the future, Japan is likely to attend NATO conferences on a regular basis.

In the keynote address he delivered to the IISS Shangri-La Dialogue security conference in Singapore on June 10, Prime Minister Kishida said that he personally had “a strong sense of urgency that ‘Ukraine today may be East Asia tomorrow.’”

Nonetheless, the fact that Kishida spoke of the threat to the region without once mentioning China by name was very telling. No matter how faithful an ally of the United States Japan may be, it still seeks to distance itself from the aggressive position of the United States on China, and is not willing on its own to court friction with Beijing.

In Western Europe as well there is strong concern about being dragged into a conflict between the United States and China. That is one reason why many Europeans can sympathize with Japanese-style confrontation-avoidance diplomacy.