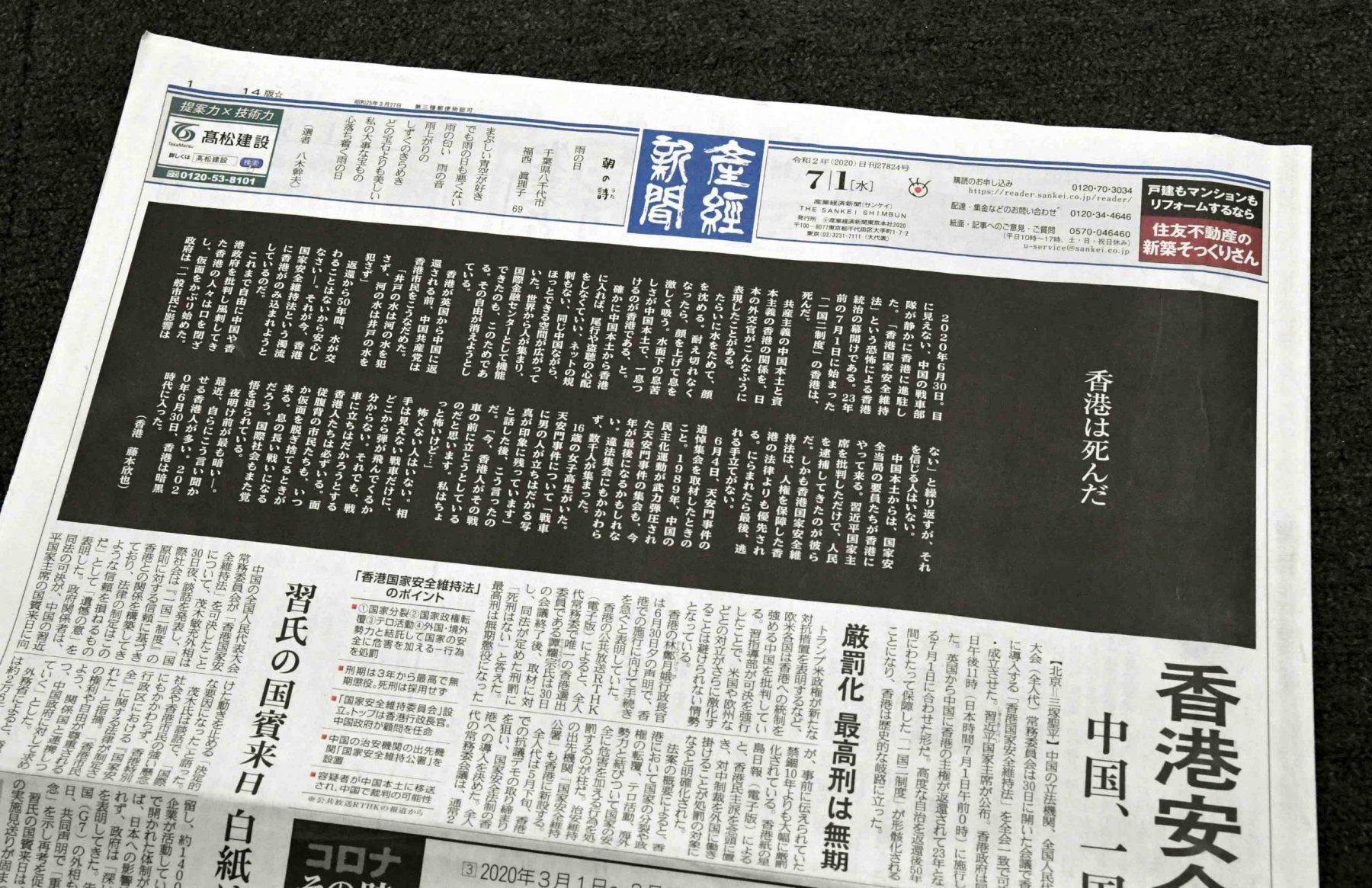 Front page of the July 1, 2020 Sankei Shimbun with the top article, "Death of Hong Kong," in a black mourning banner.

The 2020 Vaughn-Uyeda Memorial Prize in journalism was awarded to Kinya Fujimoto (57), deputy editor of The Sankei Shimbun, along with Shinichiro Serita (48), Deputy Editor of the Foreign news section of Kyodo News (Kyodo Tsushin), it was announced on February 24.

The Vaughn-Uyeda Prize is conferred annually on journalist(s) “who have made exceptional contributions to the promotion of international understanding through their reporting.”

The selection committee cited Fujimoto’s compelling reporting on the struggle for democracy by the people of Hong Kong, even as the Xi Jinping regime in Beijing pushed its “Sinification” policies. Fujimoto remained in Hong Kong on special assignment for one year from October 2019.

The committee also noted how, after the Chinese government adopted its draconian Hong Kong national security law at the end of June 2020, Fujimoto wrote an article with the title “The Death of Hong Kong,” which was picked up by the Hong Kong media and generally caused quite a sensation. Fujimoto also won plaudits for his tenacious coverage of independent voices like Jimmy Lai, publisher of the popular newspaper Apple Daily, who was later arrested for violating the new security law.

RELATED: Waiting for the Day When Hong Kong is Liberated

Fujimoto, a graduate of Waseda University in Tokyo, joined The Sankei Shimbun in 1990. He served as bureau chief in Hong Kong, Brussels, Singapore and Seoul, and also headed up Sankei’s China General Bureau, before becoming Deputy Editor at the daily’s Tokyo headquarters from October 2019.

Serita’s prizewinning effort was also China-related. His interview with a former top-level official in the Chinese navy revealed that planning for the incursions by Chinese government vessels (maritime law-enforcement vessels) began on orders from the Beijing “leadership” in 2008, two years before they actually first appeared in Japanese waters.

The Vaughn-Uyeda Prize was established in 1950 to honor the memory of Miles Vaughn and Sekizo Uyeda, two good friends who died together in a boating accident in Tokyo Bay the year before. Vaughn had been the general manager for Asia of United Press (the forerunner of UPI) while Uyeda was former president of Dentsu.

This was the first time that a Sankei Shimbun journalist received the prize since then Singapore Bureau Chief Keiko Chino did so in FY1997.

In accepting the award, Fujimoto expressed his thanks to the people of Hong Kong who chose to express their opinions to Japanese reporters even though they realized how risky it had become to meet with the foreign media after the imposition of the national security law.

“Look at Hong Kong today if you want to know what the loss of liberty and democracy look like,” he said.

“I want to continue looking at and describing the reality of what is happening in Hong Kong,” Fujimoto added.