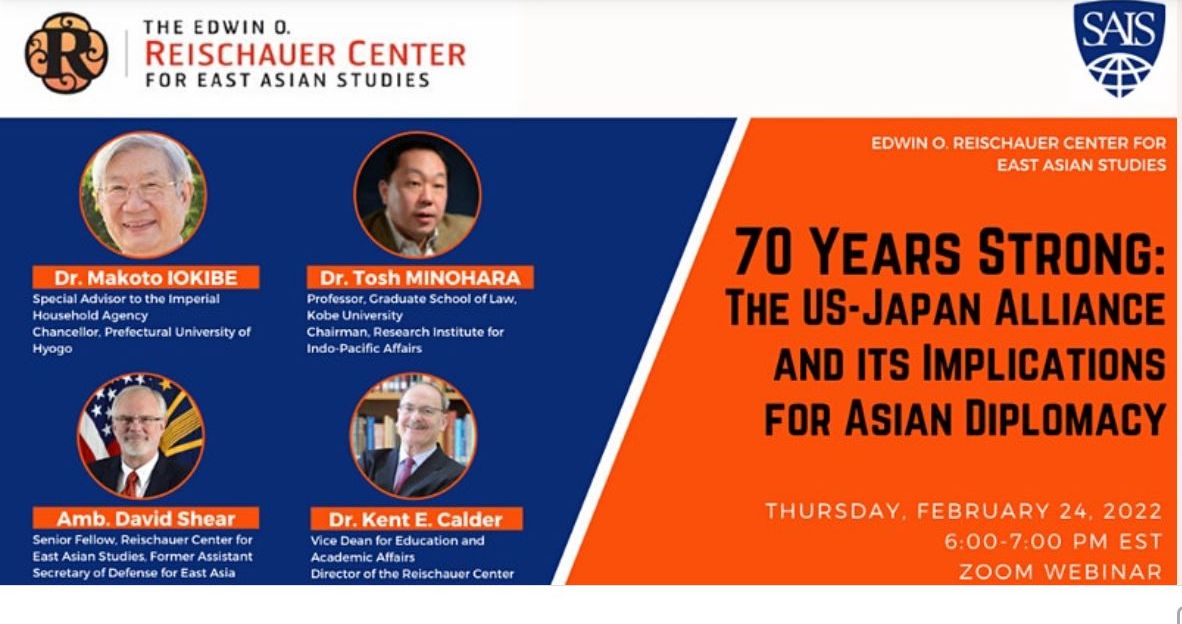 In the early morning of February 25, 2022 Japan time — early evening of the 24th in the United States — four eminent scholars of the United StatesーJapan alliance and of American and Japanese diplomacy gathered to discuss the importance of the cross-Pacific partnership.

The event was titled “70 Years Strong: The US-Japan Alliance and Its Implications for Asian Diplomacy”. It was hosted by the Edwin O. Reischauer Center for East Asian Studies in Washington, DC.

First, renowned scholar of US-Japan relations Makoto Iokibe, now chancellor of the Prefectural University of Hyogo in Japan, set the tone in his brief opening remarks. Chancellor Iokibe argued that the true value of the US-Japan alliance must be demonstrated in the face of new challenges, and that the way to do this is to find ways in which the alliance can evolve.

The moderator of the discussion, Kent E. Calder,  Director of the Reischauer Center and Interim Vice Dean for Education and Academic Affairs of the Johns Hopkins School of Advanced International Studies, reinforced Chancellor Iokibe’s sentiments. Observing that the institutional structure of the Asia-Pacific had changed profoundly, he thus highlighted the need for a strong US-Japan relationship.

“SEATO [the Southeast Asia Treaty Organization] has collapsed,” Dr. Calder noted, referring to the transnational grouping which disbanded in 1977. Dr. Calder also pointed out that the United Nations has not been particularly effective in Asia since the Korean War (1950-1953).

With the rise of new institutions and structures centered on the People’s Republic of China, Dr. Calder continued, the US-Japan alliance faces an additional challenge in the region.


‘Japan Should Act in Lockstep with the United States’

Commenting on the Russian invasion of Ukraine, which was unfolding as the Reischauer Center talk was underway, Dr. Calder asked the two panelists in the discussion for their views on what Japan’s response to the Ukraine crisis should be. Kobe University Graduate School of Law professor Tosh Minohara and Former Assistant Secretary of Defense for East Asia Ambassador David Shear were the panelists. Their responses were colored by the given that the Quad (the informal grouping of India, Japan, Australia, and the United States) was not likely to play a major role in events in Eastern Europe.

“Japan should act in lockstep with the US,” answered Dr. Minohara, stressing the importance of alliance with the United States in forestalling aggression.

Dr. Minohara also emphasized that Japan should show strong leadership on the world stage, such as in its role as a G7 country. “I miss former prime minister Junichiro Koizumi,” Dr. Minohara said, because of the strong leadership that Koizumi showed during his tenure in office (2001-2006).

One of the obstacles to Japan flexing its muscles, of course, is the Japanese constitution, particularly Article 9 which constrains Japan’s military activities. On that point, Dr. Minohara stressed that Japan should revise the constitution in light of the changed security environment in the region.

“The world is not afraid of a militarized Japan,” Dr. Minohara said. He stressed that the world is afraid of a Japan that does not act and lead, and that it is time for Japan to jettison its “middle power mentality” and become a security provider instead of a security receiver.

Touching on Russian President Vladimir Putin’s invasion of Ukraine, Dr. Minohara warned that if Putin’s “blitzkrieg” were to succeed, then the People’s Republic of China would see it as a signal that the status quo can be changed, which could jeopardize the security of Taiwan.

Ambassador Shear agreed that a strong stance should be taken against Russian aggression, and noted that he was encouraged by Japanese Prime Minister Fumio Kishida’s condemnation of Russia’s actions in Eastern Europe.

Like Dr. Minohara, Ambassador Shear also wants to see Japan in “lockstep” with the United States on the question of Ukraine and other issues.

Central to Japan’s leadership, Ambassador Shear suggested, was a more normal US-Japan alliance. The ambassador noted that “extraordinary progress” had been made in this regard during the tenure of former prime minister Shinzo Abe.

“We must cooperate with Japan” on possible “contingencies” on the Korean Peninsula and in Taiwan, Ambassador Shear continued. The ambassador also noted that he was encouraged by former Prime Minister Yoshihide Suga’s remarks about Taiwan during his first meeting with President Biden.

Ambassador Shear, who formerly served as the United States ambassador to Vietnam, also said that he wanted to see Japan work more closely with Southeast Asian nations. Japan’s effort to save the Trans-Pacific Partnership deal, Ambassador Shear noted, was a good example of how Japanese leadership stood to benefit the region.

The US-Japan alliance remains a force for good in the Asia-Pacific and beyond, the discussants affirmed in a variety of ways. However, as the Ukrainian crisis highlights, there remain many challenges.

For example, Dr. Calder asked if there would be any “echo effects” across the continent from Ukraine given Russia’s invasion, such as a ratcheting-up of tensions in the East China Sea.

On this note, Ambassador Shear remarked that the Chinese side appeared to be the stronger partner in the relationship, a fact reflected in the February 4 agreement entered into between Russia and China prior to Putin’s invasion.

Dr. Calder averred that, on the Taiwan question specifically, Xi Jinping would not want to risk an invasion before the meeting of the Communist Party National Congress in the fall.

Japanese domestic politics, too, can put a crimp in the US-Japan alliance. Dr. Calder mentioned, for instance, the traditional cap on Japan’s defense spending at 1% of GDP — a tradition which both Prime Minister Abe and another former prime minister, Yasuhiro Nakasone, both broke. Dr. Minohara rebutted that the 1% custom is not a rule, and that as Japan does more militarily and builds up the alliance with the United States, budget outlays will naturally rise.

Finally, Dr. Minohara mentioned the crisis in Ukraine in the context of Russia-Japan relations. Russia continues to occupy Japan’s Northern Territories, islands which the Soviet Union illegally took during the waning days of World War II.

Dr. Minohara said that Japan may be wary to deal sternly with Russia over Ukraine lest she damage her position on the Northern Territories, but that because Putin has no incentive to negotiate away territory, Japan should be assertive without undue fear of reprisal.