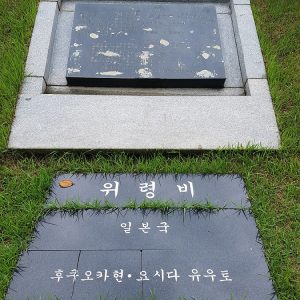 In 1983, the late Seiji Yoshida, who gave the Asahi Shimbun and many other researchers and media outlets his false stories about having hunted for comfort women in Korea, erected an “apology stela” in the Mang-Hyang Cemetery in South Korea. This stela was allegedly in atonement for Yoshida’s “war crimes,” all of which turned out to be elaborate hoaxes.

In March of 2017, based on the wishes of a private Japanese citizen, that stela of apology—founded as it was on Yoshida’s bogus testimonials—was finally amended to one commemorating and consoling the spirits of the dead.

It was thought that the matter would rest there. But the South Korean side decided to revive the old Yoshida stela, and even erected another plaque next to it which seeks to vindicate the discredited Yoshida narrative.

These developments were first discovered in March of 2017 by former Japan Self-Defense Forces official Shigeharu Oku, 69, when he went to Cheonan, in central South Korea, to visit the Mang-Hyang national cemetery where the stela is located.

Oku’s trip came after receiving a request from Yoshida’s oldest son, who feared that his father’s false testimonial was impeding Japanese-South Korean friendship. Oku was asked to take with him a new slab to lay over the old stela. By covering Yoshida’s lies, Oku converted the apology stela into a monument commemorating and honoring the spirits of the dead.

After completing this task, Oku returned to Japan, only to receive summons from South Korean authorities to turn himself in. He again flew to South Korea, where he was temporarily taken into custody and forbidden to leave the country. Oku was charged with damaging public property and other crimes. On January 11 this year, Oku was sentenced to six months in prison, with a two-year suspended sentence.

After removing the memorial slab that Oku had overlaid atop Yoshida’s apology stela, the South Koreans erected beside the stela a plaque lauding the senior Yoshida and condemning Japan.

The plaque erected by the South Korean authorities reads in part:

From 1943 to 1945, Japanese Seiji Yoshida (d. 2000) worked as the head of the Labor Mobilization Section in Yamaguchi Prefecture, which was part of the semi-governmental National Patriotic Labor Association of Japan. During that time, he carried out a mission to forcibly abduct 6,000 Koreans to be comfort women and for other purposes.

In 1983, Yoshida, admitting to his own war crimes, published the autobiography My War Crimes: Forced Abduction of Koreans, a confessional account of his wartime activities. Yoshida used a portion of the royalties from the sales of that book to help pay for the cost of erecting a stela of apology.

Seiji Yoshida participated in the stela unveiling ceremony and read out loud the stela’s inscription, going down on his hands and knees in supplication before the many other participants there assembled. The participants said that the criminal should lie prostrate and offer his prayers, so Yoshida had the stela of apology emplaced horizontally, made to lie low, and not standing upright.

However, in March of 2017, Seiji Yoshida’s eldest son, saying that his father had given a false testimony, requested that former Japan Self-Defense Force official Oku Sekiharu [sic] place another notification slab atop the original stela. This Oku did, changing the apology stela, without permission, to one commemorating and honoring the spirits of the dead.

Debates are still ongoing as to whether Yoshida Seiji’s testimonial was true or false. Even if there is an attempt to conceal atrocious crimes by changing a stela of apology into one commemorating and honoring the spirits of the dead, it remains an unchanged fact that Japan forcibly recruited the people of our nation, and committed atrocities against us.

The stela of apology has been restored to its original condition, conveying as before, Yoshida’s cruel hoax:

Due to forced abduction and recruitment during Japan’s war of invasion, your precious life was stolen from you, all while you longed for your family and hometown while enduring the insults and hardships of forced labor. I, as a single Japanese who directed the carrying out of recruitment and forced abduction, deeply repent the spirit and the act of those inhumanities, and hereby apologize for them. Even after my own death, I will go on apologizing in supplication before your souls.

And yet, on January 9 this year, South Korea tacitly accepted that the issue had been resolved when it chose not to seek a renegotiation of the 2015 comfort women agreement signed by the governments of South Korea and Japan. That agreement finally and irrevocably settled the comfort women issue.

But of all of the falsehoods in Yoshida’s statements and the South Korean plaque set up next to Yoshida’s stela of apology at the Mang-Hyang Cemetery, attention should be paid in particular to the expression “testimonial on the atrocities committed against the teishintai (women’s volunteer corps).”

It is clear not only to academics in Japan but also to those in South Korea that there was no connection whatsoever between the comfort women and the teishintai, even though non-specialists have often conflated the two. But historical facts uncovered by careful researchers appear to matter little to comfort women propagandists.

‘Asahi’ Still Central to the Confusion

“It really is a marvel,” the younger Yoshida said, “that the South Korean side would re-erect that stela when even the Asahi Shimbun now admits that my father lied about everything—his testimonial, his government rank, all of it.”

How long are our neighbors in South Korea going to cling to the Yoshida testimonial, a testimonial utterly shot through from beginning to end with lies? What of Shigeharu Oku’s prison sentence for laying a new slab over Seiji Yoshida’s old stela of apology in the Mang-Hyang cemetery? Oku has appealed the guilty verdict, but the appeal is ongoing and nothing is certain.

“The court ruled that ‘the damaged stela of apology is property managed and used by a public office,’” Oku said. “If this is true, then there has been insufficient evidence provided on the process by which the stela became public property.”

“At the trial,” Oku continued, “we stated our opinion that the ongoing use of the stela containing the false testimonial was itself defamatory towards South Korea. However, these remarks were not even translated for the court. Even if the ownership of the stela of apology is not clear, we are appealing in part on the grounds that the copyright for the text written on the stela belongs with the Yoshida family.”

“About 10 South Korean media outlets were in the courtroom during the trial,” Oku recalled. “Some reporters also came to speak with me in person, but the Asahi Shimbun, even though it has a bureau in Seoul, didn’t come, except when the judgment was handed down, and even then, they ran only a very brief report.”

“This is despite the fact that this whole problem started because both I and Yoshida’s eldest son read the Asahi article and for 34 years believed that Seiji Yoshida had set up the stela of apology as a private individual,” Oku explained.

However, during the trial, the prosecution entered as evidence a written request to set up the stela of apology filed by the Association of Sino-Soviet Separated Family Members.

“The Asahi Shimbun didn’t have a single word about how the stela was erected, instead reporting that, ‘The master of ceremonies during the unveiling was from the Association of Separated Family Members, with which is affiliated the group of plaintiffs in the lawsuit, currently underway in district court in Tokyo, over the return of the South Koreans stranded in Sakhalin,’” Oku said.

“Surely, they should have been interested in arguing that the stela of apology had been set up under Seiji Yoshida’s personal discretion, because that is the line they took before they repudiated his claims.”

Editor’s Comment
If the comfort women system was indeed of the scale that is usually claimed, and if there were as many Koreans taken as is commonly claimed, there would be so much other evidence that no one—not even Korean activists on this issue—would resort to repeating the claims of a serial liar whose stories were proved to be fabrications beyond a shadow of a doubt only a few years after publication. This is true even though it took the Asahi Shimbun, Japan’s most liberal and left-leaning newspaper, 32 years to finally admit that it had published a hoax.
When you have rock-solid historians showing that Yoshida’s claims were bogus, when you have his publisher saying his claims were bogus, when you have his son saying his father was a liar, and when you have Yoshida himself saying on several occasions that his writings contained fabrications, is it not time for Koreans to recognize that Yoshida is not someone to make into a hero?
The energy that has been devoted to trying to save face on this issue would be better spent on finding credible contemporary evidence for the usual Korean claims about the comfort women. There should be no shortage of documentation and recollections if the system was as large and as many women were taken as claimed by those out to permanently portray Japan the villain.

Edited for English readers by Earl H. Kinmonth, professor emeritus at Taisho University. Before moving to Japan in 1997, he was reader in Japanese Studies at the University of Sheffield (1989-1997) and professor of history at the University of California-Davis (1977-1989). His research is in the history and sociology of Japanese education from the Meiji period to the present, with an emphasis on 1930s-1940s Japan. He is a Japanese citizen and writes commentary in English and Japanese.

A longer version of this article by Japanese journalist Miki Ohtaka originally appeared in the March 2018 edition of Seiron. It was translated from Japanese by Jason Morgan, PhD, assistant professor at Reitaku University.