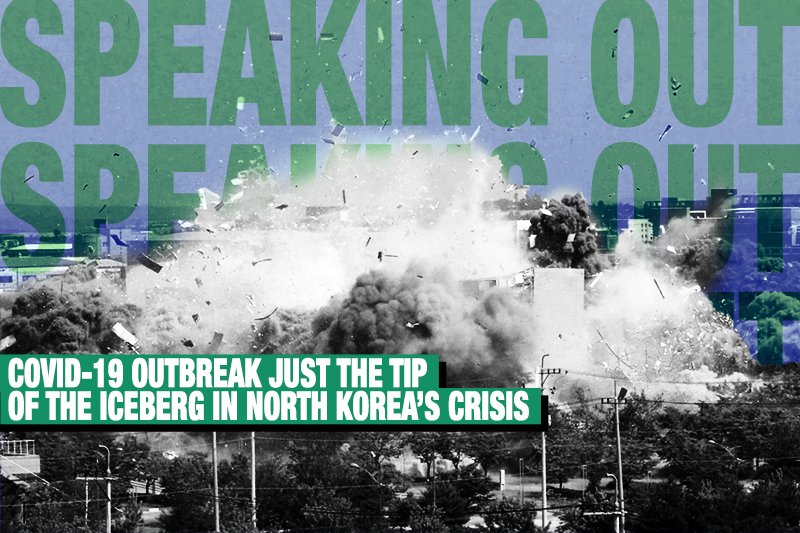 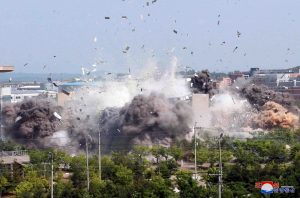 Explosion of the Inter-Korean Liaison Office in Kaesong

Ending a claim that there is no novel coronavirus patient in the country, North Korea has finally admitted it is suffering from an outbreak of the infection. A former North Korean defector, who had returned from South Korea to Kaesong City, across the demilitarized zone, was suspected of having been infected.

In its top story on July 26, the Rodong Sinmun — the official organ of the North Korean Workers’ Party — reported that an emergency meeting of the expanded KWP Politburo had taken place the previous day. Chairman Kim Jong Un, it announced, had told the Politburo members that a critical situation had occurred in which “the vicious virus could be said to have entered the country.”

Kim said that he had taken steps to “totally block [entry and exit from] Kaesong City” in the afternoon of July 24, and declared a state of emergency covering the relevant area. He added that he would “shift the state emergency anti-epidemic system to the maximum emergency level and issue a top-class alert.”

However, it is an overreaction to block a whole city and shift to the emergency management system to the maximum level in response to only one suspected infection.

Pyongyang might have taken advantage of the suspected infection to attract attention away from the fact that there were numerous infections in the capital and along the border area with China, which it could not conceal any longer. Pyongyang also might have used the opportunity as an attempt to signal its future request for large-scale medical support from South Korea. It may also suggest that the discontent of people in North Korea has heightened enough to require the top-class alert to suppress it.

Recent remarks by Chairman Kim provide an indication of his impatience and sense of crisis. At a Politburo meeting on June 7, where the security of the livelihood of Pyongyang residents was raised as an issue, Kim ordered the formulation of national countermeasures.

Since April, North Korea has failed to distribute rations to residents in most parts of Pyongyang. In July, the equivalent of one month’s special rations (or a half month’s rations, according to some reports) were distributed to mark the anniversary of former president Kim Il Sung’s death, but no guarantee has been provided that such special rations will be continued.

At a meeting of the KWP Central Military Commission on July 18, Kim sternly rebuked military cadres, according to video footage of the encounter. The commission had pointed out “a series of problems arising in the political and ideological life of members of the Korean People’s Army, and in their military activities,” and decided to “intensify the party’s education and guidance to KPA commanders and commissars in line with the party’s [official] thought and requirements.” This means that Kim was angry with army leaders for their complaints.

During his field trip to provide guidance on the construction of the new Pyongyang General Hospital, as reported on July 19, Kim rebuked the commission coordinating the construction ー a task force comprising KWP, government, and military officials ー for “burdening the people” by encouraging their assistance without properly setting the budget for the construction. He replaced all members of the commission.

The commission’s failure was that it could not find hard currency to pay for the costs of the hospital construction ordered by Kim, and had therefore requested the people to bear the burden. The request, by necessity, should have been approved by Kim. After learning of the strong discontent among the starving public, however, Kim appears to have passed his responsibility on to the commission.

Several billions of U.S. dollars in hard currency are annually required to maintain the North Korean dictatorship. This foreign currency has been assembled for Kim’s governing funds and managed by the KWP’s Central Committee Bureau 39, known as Room 39. Due to international sanctions and North Korea’s shutdown of the border with China to prevent the coronavirus outbreak, however, the amount of hard currency under the control of Room 39 has reportedly declined to below $100 million USD.

The Kim regime is facing its most serious crisis. We must keep strong pressure on North Korea for the purpose of bringing about their decision for the immediate return of all abductees and complete dismantlement of nuclear missiles. Simultaneously, we must keep a close watch to make sure that South Korea does not breach the international sanctions.

(A version of this article was first published by the Japan Institute for National Fundamentals, Speaking Out #704 (Special) on July 29, 2020.)