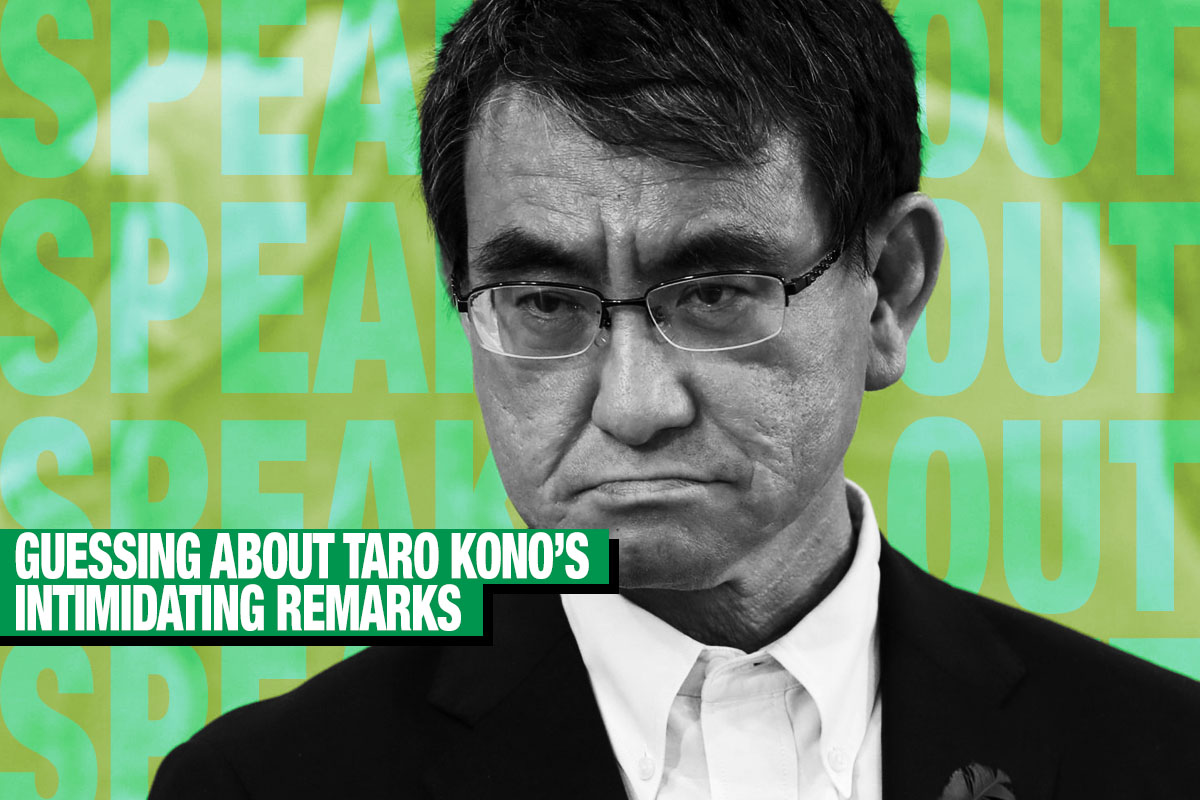 In intimidating remarks to a senior official at the Agency for Natural Resources and Energy, as reported by Weekly Bunshun magazine, administrative reform minister Taro Kono loudly asserted that nuclear power plants, if coming under North Korean missile attacks, would be dangerous.

Kono, when serving as defense minister in 2020, took initiative in canceling plans to build a ground-based Aegis Ashore missile defense system in Japan to intercept incoming missiles. I guess that he might have buried the plans in a bid to expose nuclear power plants to the danger of missile attacks, leading to the abolishment of these plants.

‘What Would You Do if North Korea Fires Missiles?’

The Following is an excerpt of a conversation between Kono and the senior agency official, as reported by Bunshun Online:

Senior official: (Renewable energy’s share of a target power generation mix in the draft Strategic Energy Plan) is around 36-38% (based on the accumulation of policy measures).

Taro Kono: If so, the share should be given as 36-38% or more (rather than around 36-38%). Call anyone who can understand the Japanese language.

Taro Kono: I don’t know why the draft Strategic Energy Plan included many descriptions to the effect that it would be unfavorable for Japan to spread renewable energy. You dropped them, didn’t you?

Taro Kono: If so, you should write that nuclear power plants are vulnerable to North Korean missile attacks. Japan is too small to have sites for disposing of spent nuclear fuel. You should write all these facts.

In their well-known cliché, nuclear power plant opponents fan the fear that nuclear plants, if they were to come under direct missile attack, would become dangerous and spread radioactive contamination.  Kono shares this idea with opponents of nuclear power.

Shunichi Tanaka, when he was serving as Nuclear Regulation Authority chairman, told the Japanese Diet that nuclear missiles would cause far more damage by exploding over large cities than by attacking nuclear power plants with surgical precision.

The nuclear plants in operation have underground facilities that prevent radioactive materials from leaking in the event they are attacked by terrorists from the air or using aircraft.

The Japan Institute for National Fundamentals has further proposed that offshore windmills and wire fences be installed at nuclear power plants. Missiles would explode and be destroyed upon touching these objects, before they could directly hit a nuclear plant.

I would like to respond to Kono’s intimidating remarks politely:

“You canceled the Aegis Ashore deployment plan. What would you do if North Korea fires missiles at Japan?

“You branded attacks on enemy missile bases as the idea of the Showa Era (that ended in 1989). The capabilities to attack enemy bases is required [by Japan] because you made it impossible for Japan to intercept those missiles.

“If Japan discontinues reprocessing spent nuclear fuel ー as you have proposed ー it may have no choice but to put spent fuel into metal casks and bury them underground. But this would quadruple nuclear waste volume, making it difficult for Japan to dispose of nuclear waste.

“Why do you pressure the government to raise renewable energy’s share of the future power generation mix?

“Is this because the higher renewable energy share would help increase sales from a solar panel component factory in China owned by a company headed by your younger brother?”

(A version of this article was first published by the Japan Institute for National Fundamentals, Speaking Out #834 on September 27, 2021 in Japanese.)