[Speaking Out] Why Not Discuss Nuclear Weapons? 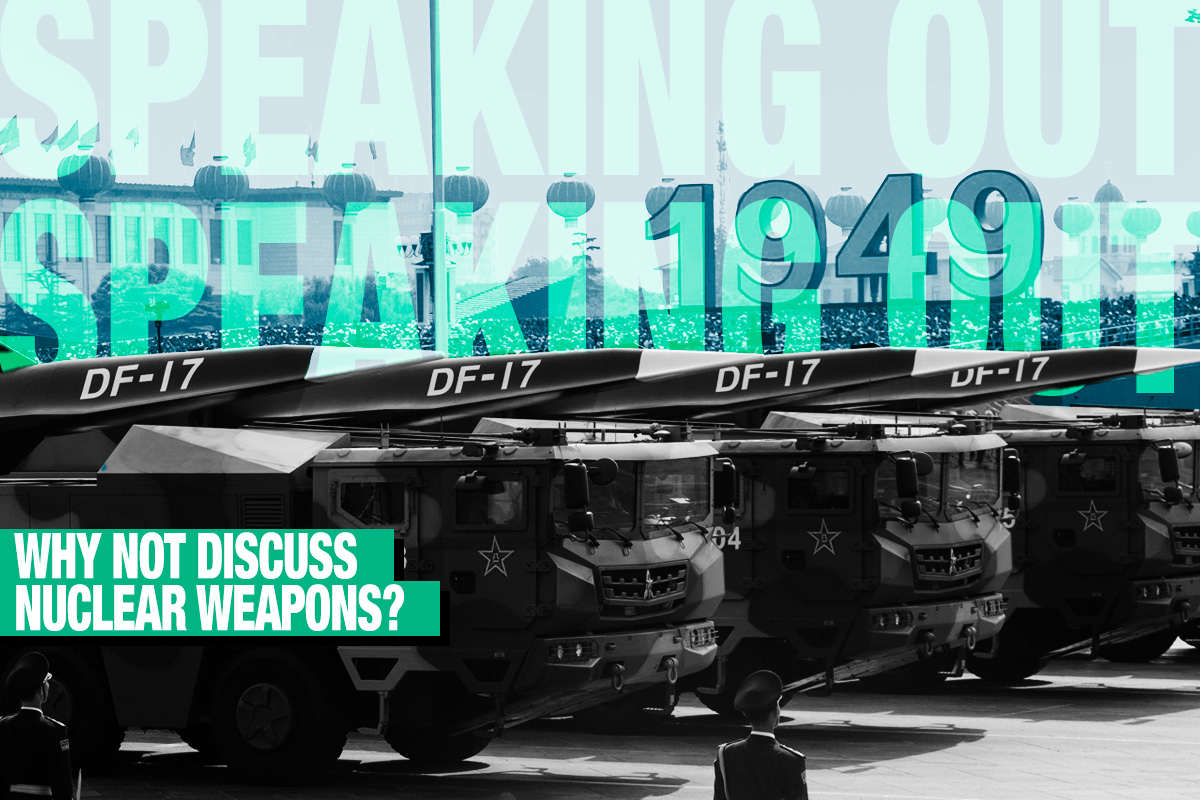 Chinese military vehicles carrying DF-17 roll during a parade to commemorate the 70th anniversary of the founding of Communist China in Beijing, Tuesday, Oct. 1, 2019. Military planners in Washington and elsewhere will be taking note of new missile technology displayed by China, particularly the hypersonic Dong Feng 17 or DF17 ballistic nuclear missile believed capable of breaching all existing anti-missile shields deployed by the U.S. and its allies. (AP Photo/Ng Han Guan)

In a television program on October 15, 2006, Shoichi Nakagawa, then chairman of the ruling Liberal Democratic Party’s Policy Research Council, called for carrying out a thorough discussion about nuclear weapons, drawing many responses at home and abroad.

He explained his real intention in a weekly magazine later: “I have never argued that Japan should possess nuclear weapons at all. What I said was that we should discuss nuclear weapons. More specifically, I said that I would like to propose discussions on nuclear deterrence. That is deterrence for Japan’s peace and security, including deterrence against abduction. It is unreasonable to stifle discussions.”

More than 15 years later, former Prime Minister Shinzo Abe said in a television program on February 27: “While Japan has three non-nuclear principles, we should not regard discussion on nuclear weapons as a taboo. Within the North Atlantic Treaty Organization, Germany and other members implement nuclear sharing. We should discuss how to protect the people’s lives with an eye to various options.”

We must acknowledge the reality that a country must have its own power to push back other’s power. The power includes not only conventional but also nuclear power. A big nuclear-weapon state Russia threatens to use nuclear weapons to intimidate a non-nuclear neighbor. The international community cannot stop such intimidation.

Meanwhile, China is predicted to possess about 1,000 nuclear warheads by 2030, rivaling the United States as a nuclear power. China, which imposes dogmatic values on other countries and does not hesitate to use force to change the status quo, can be expected to threaten the use of nuclear weapons to expand its hegemony, while constraining the US power.

Taiwan and Japan are located on the first island chain that blocks China’s expansion of its hegemony. How would Japan respond if Chinese President Xi Jinping is lured into miscalculation and overconfidence, as is the case with Russian President Vladimir Putin? What if China invades Taiwan and threatens the use of nuclear weapons against Japan that supports United States forces participating in Taiwan’s defense?

Insecure Under a Nuclear Umbrella Alone

Among NATO allies, Germany, Italy, Belgium, the Netherlands and Turkey share with the United States some 100 nuclear bombs thar can be carried by military aircraft to deter Russian nuclear use. This proves that they think a US nuclear umbrella is not enough to defend their security.

To prevent today’s Ukraine from becoming tomorrow’s Japan, it might be necessary for us to discuss all options to defend Japan’s security, including the revision of the three non-nuclear principles, without regarding any option as a taboo, as urged by Abe and Nakagawa.

(A version of this article was first published by the Japan Institute for National Fundamentals, Speaking Out #899 in English on March 16, 2022, and in Japanese on March 14, 2022.)

Kiyofumi Iwata is a councilor at the Japan Institute for National Fundamentals. Formerly, he served as Chief of Staff of the Japan Ground Self-Defense Force.