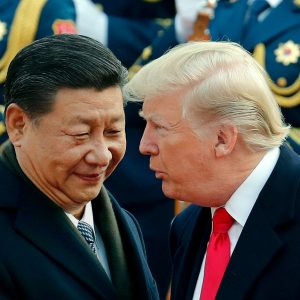 The United States, with its hegemony in the Indo-Pacific region, has been locked in a confrontation against Chinese expansionism. Now, President Donald Trump’s administration has demanded that Chinese President Xi Jinping’s government slash China’s trade surplus with the U.S. by US$200 billion, signifying the starting gun of a “100-year trade war” between the world’s two largest economies.

The first round of the current U.S.-China trade consultations was held in early May in Beijing. In the talks, the U.S. side demanded that China cut its annual trade surplus with the U.S. $100 billion during the 12-month period from June this year, plus an additional $100 billion over the 12 months beginning June 2019. The U.S. also put the screws on China, calling for an end to infringement of the intellectual property rights of American companies and demanding China stop forcing U.S. firms to turn over their high-tech technologies.

In the subsequent bilateral consultations on May 17-18 in Washington, DC, Beijing came out with plans for increasing energy and farm commodities purchases, among others, from the United States. The U.S. agreed to shelve the planned tariff sanctions, effectively declaring a tentative ceasefire in its trade relationship with China.

In light of such wheeling and dealing, it may sound like an exaggeration to describe the emerging trade tensions between the U.S. and China as a “100-year war.” However, the diagram below tells the bigger story of China’s international balance of payments and the trade balances of the two countries.

China has been yielding colossal amounts of current-account surpluses through its exports. These surpluses further combine with the inflow of hard currency from investments in China by foreign companies from Japan, the United States, and European nations, among others.

The People’s Bank of China, the only issuing bank in China, has been absorbing these hard currencies and turning them into foreign exchange reserves. The bank issues renminbi, or Chinese yuan, proportionate to the increase in forex reserves, allowing lending to expand through commercial banks. This has been the basis for China’s high-growth equation ever since the introduction of its reform and open-door policies.

The global financial crisis in the wake of the fall of Lehman Brothers in September 2008, in particular, served to boost the acceleration of China’s economic clout. In the aftermath of the crisis, the U.S. Federal Reserve Board quadruplicated issuance of the dollar, increasing it by more than three trillion over a period of five years. Close to the same amount of U.S. dollars subsequently flew into China in the form of trade surpluses and foreign investments. The Chinese central bank then carried out a policy of quantitative monetary easing on the same scale as that of the U. S., through which it successfully regained double-digit growth.

In November 2014, Xi Jinping, who assumed the post of the general secretary of the Chinese Communist Party in the autumn of 2012, trumpeted the “One Belt, One Road” development strategy—his vision of a modern version of the Silk Road economic zone of expansive scale, ranging from Eurasia to the Middle East and Africa on both land and sea. Contemporaneously, China carried out military buildups in the South China Sea by seizing the Spratly Islands, overriding the will and rights of other countries in the Southeast Asian region.

These moves were shored up by China’s power of money. In short, the driving force behind China’s expansion on both the economic and military fronts can be said nothing but the inflow of foreign currency.

The Chinese economy, however, includes an inherent vulnerability, which could even be lethal to its future. As shown by the earlier diagram, China’s trade surplus with the United States has always topped its current-account surplus. In other words, China could continue neither monetary nor financial expansion without earning trade surpluses at the expense of the U.S.

Washington has yet to confirm the extent to which the Trump administration intends to sting China on the trade issue, but Washington has taken particular note of the statistics showing its trade deficit with China amounted to an alarming $375 billion in 2017.

Meanwhile, China’s current-account surpluses have tended to shrink in recent years—it was no more than $120 billion in 2017. Should its trade surplus with the U.S. be cut to the tune of $200 billion U.S. dollars, China’s balance of payments would certainly plunge into the red by a large margin, possibly bringing down Xi’s external expansionist strategy.

As things stand, the power of China’s money itself can be viewed as just a façade. Although it is clearly the world’s number one in foreign exchange reserves, which have exceeded $2 trillion, the substance backing up China’s financial position is like a box with a pushed-up bottom of the kind often seen in souvenir confectionery boxes. Direct investments by foreign firms and other items classified as liabilities, such as bond issues overseas and borrowing by banks, have been absorbed by the People’s Bank of China, which accounts for them as forex reserves. As demonstrated by the diagram, though, increases in these liabilities have far exceeded additions to Beijing’s foreign reserves.

Despite the swelling of liabilities and current-account surpluses, the outstanding balance of China’s forex reserves in 2017 narrowly surpassed the levels in 2016. This is mainly because of the uninterrupted flight of massive sums of capital from within China.

The scale of the flight of capital reached an estimated $1 trillion on an annual basis in the latter half of 2015. This was attributed mainly to Beijing’s policy of forcing depreciation of the yuan for the purpose of strengthening the country’s export competitiveness. The policy was not favored by China’s domestic investors and the wealthy, who shifted their cash abroad, sometimes stealthily and through illegal channels, to escape its effects.

Subsequently, as the authorities guided the exchange rates of the yuan a little higher, the flight of capital subsided, but the forex reserves have continued to hover around $200 billion. Given the bleak state of the forex reserves, the Xi administration is all the more certain never to accept a cut in China’s trade surplus with the United States by as much as $200 billion, and will even refuse to reduce the surplus by half that figure.

The nature of the Washington-Beijing friction is dependent in part on the situation involving North Korea. President Trump has made his expectations clear for Xi Jinping’s exercise of influence in the long term over North Korea Workers’ Party Chairman Kim Jong-un. Xi is eager to take advantage of Trump’s expectations in pushing for concessions from the U.S. in the trade talks. This, however, may be nothing more than a momentary phase in a long, long process of the two countries’ offense and defense over trade issues.

It would be glaringly obvious even for a successor U.S. administration that achieving a steep reduction in China’s trade surplus with the U.S. is the most effective means to stem China’s increasing threats.

President Xi, who has secured his status as China’s president for life, will never make a compromise with the U.S. over the matter of trade surpluses, even in the face of current U.S. moves. Complying with the U.S. demand for $200 billion in trade surplus cuts would not only impose a stumbling block to Xi’s “One Belt, One Road” ambitions, but would also be tantamount to jeopardizing the very basis of the Chinese Communist Party’s economic model.
(Click here to read the original article in Japanese.)