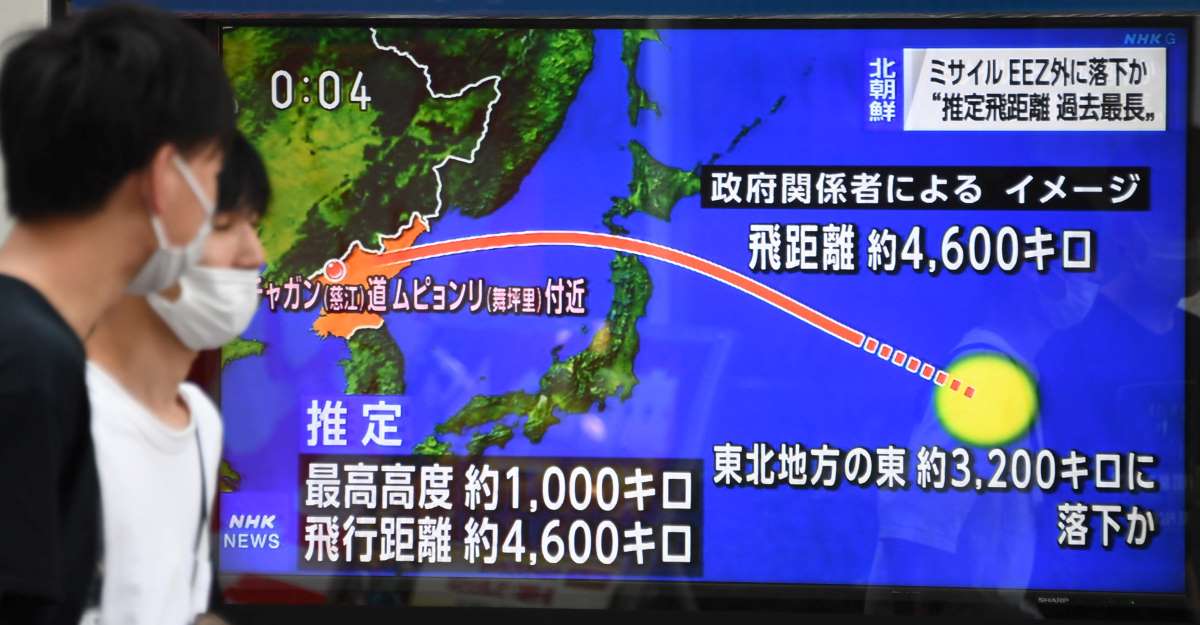 News reports that North Korea has launched a ballistic missile that is estimated to have the longest range in the North's missile launch history were televised on street monitors in Tokyo on October 4. (© Sankei by Mina Terakawachi)

On October 4 North Korea launched a ballistic missile, which flew through the skies above Aomori Prefecture before landing in the Pacific Ocean, roughly 3,200 kilometers to the east of the Japanese archipelago.

This was the seventh time that a North Korean missile had flown over Japanese territory, and the first time in five years. The total distance the missile covered in its flight was about 4,600 kilometers, meaning that it had the range to reach key United States military installations on the island of Guam in the Western Pacific.

Although there has been no confirmation of any damage caused directly by the missile, this grave provocation and challenge to Japan, the United States, and the international community cannot be ignored.

Finding Resolve to Stop the Transgressions

North Korea must adhere to the United Nations Security Council resolutions and quickly move to abandon its nuclear and missile capabilities.

Prime Minister Fumio Kishida strongly criticized Pyongyang, declaring that the missile launch posed a serious and imminent threat to Japan's security. He further characterized it as "an outrageous act and entirely unacceptable."

At a meeting between General Koji Yamazaki, chief of staff of the Joint Staff of the Japan Self-Defense Forces, and Admiral John Aquillno, commander of the US Indo-Pacific Command who was visiting Japan at the time of the launching, the two agreed to work closely together to respond to the situation.

The Japanese government has also sent a strong protest to North Korea.

Chief Cabinet Secretary Hirokazu Matsuno said that Japan would seriously consider acquiring an enemy base strike capability during the year-end revision of three documents related to defense, including the National Security Strategy. Furthermore, Matsuno called for a sense of urgency in "drastically strengthening defense capabilities."

All of these responses were to be expected. But they alone will be insufficient.


What It Takes to Achieve Deterrence

It has become irrefutably clear that in order to deter North Korean missile attacks, the Self-Defense Forces must possess enemy base strike capability. Prime Minister Kishida and the ruling parties do not need to wait until December to act.

Plans for acquiring enemy base strike capability should be finalized as soon as possible and then publicly announced. No doubt that will elicit howls of protest from some of the opposition parties, as well as from China and North Korea. But the pressing need for such a course of action can be adequately explained in the extraordinary session of the Diet and other forums.

The North Korean missile launch did expose deficiencies in the J-Alert National Instant Warning System. This system is designed to make possible evacuation by informing the public as soon as humanly possible about the threat of a missile attack.

During the recent North Korean missile launch, J-Alert was activated in Aomori and Hokkaido prefectures. There were cases in Aomori City, the capital of Aomori Prefecture, Eniwa City in Hokkaido, and other locations in which J-Alert transmissions to the public did not go smoothly.

In some cases, the disaster prevention administration radio malfunctioned. At the same time, in other areas such as island communities in Tokyo Prefecture, J-Alert was activated even though no missiles flew overhead.

That the J-Alert System should malfunction in the face of an actual "serious and imminent threat" is certainly a cause for concern. Hopefully, the situation will be quickly rectified.

The shortage of emergency shelters also needs to be corrected. Even if citizens want to evacuate should there be an alert, they would not be able to do so because of a shortage of shelters. This represents negligence on the part of local and central governments, including the Diet, which are obviously suffering from lethargy induced by many years of peace.