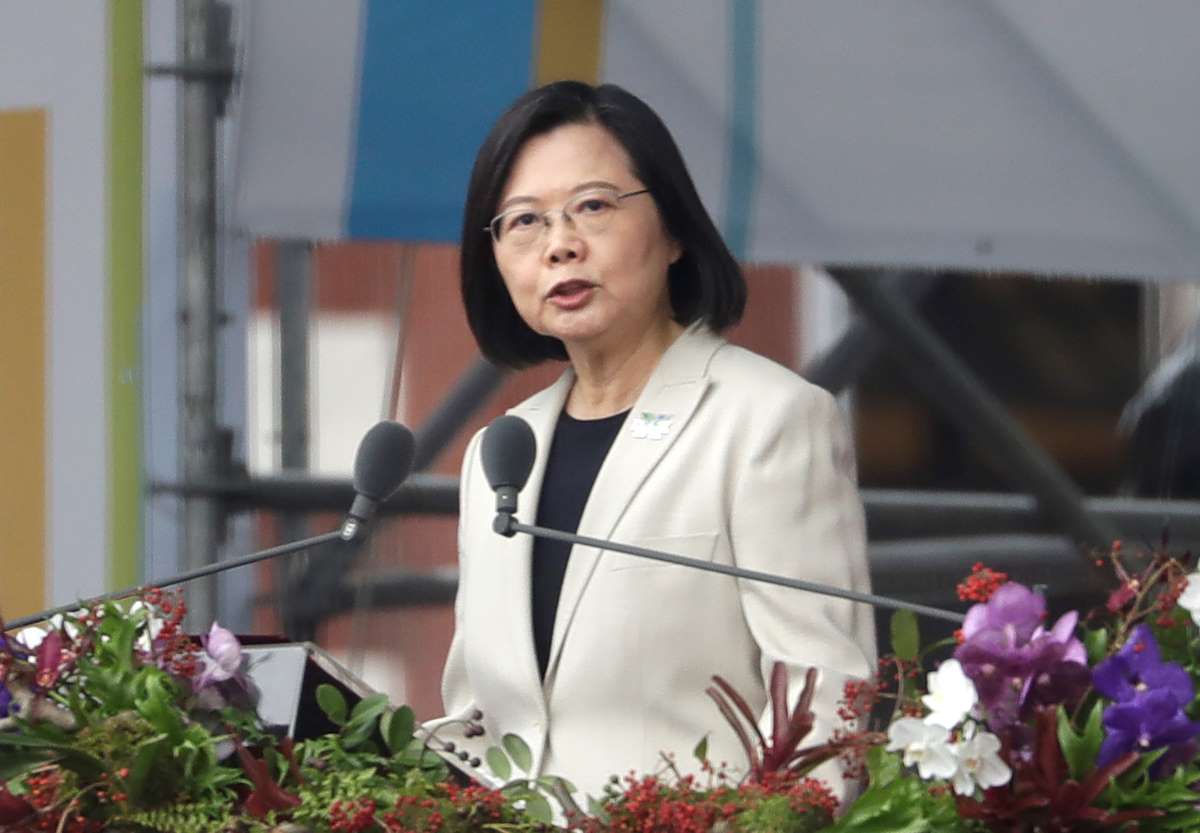 The President of Taiwan Tsai Ing-wen is renowned for her powerful speeches. And her National Day address, delivered on Sunday October 9, was typical of her impressive rhetoric.

"The consensus of the Taiwanese people … is to defend our sovereignty and our free and democratic way of life. There is no room for compromise on this," she said.

She emphasized Taiwan's status as a self-ruled island and not an annexed region of China.

China's leader Xi Jinping has said that "reunification" between China and Taiwan is inevitable and refused to rule out the use of force.

But in her speech on Monday, President Tsai urged Chinese leaders not to go down that path.

"I call on the Beijing authorities that resorting to war must not be the option for cross-strait relations," Tsai said. "Only by respecting Taiwanese people's insistence on sovereignty, freedom and democracy can we resume positive interactions across the Taiwan Strait."

Taiwan, home to 23 million people, lies fewer than 110 miles (177 kilometers) off the coast of China. For more than 70 years the two sides have been governed separately, but that hasn't stopped China's ruling Communist Party from claiming the island as its own – despite having never controlled it.

Following the Russian invasion of Ukraine and large-scale live-fire drills by China in August, the widespread view is that the risk of a Chinese invasion of Taiwan has risen significantly.

Nevertheless, President Tsai said she is willing to work with China to find "mutually acceptable ways" to maintain peace across the Taiwan Strait.

There have been reports in the local media that the government may extend the period of national service in the army from the current four-month conscription period to a year, but the president did not mention this directly in her speech.

She did however outline some of the military countermeasures Taiwan is taking in the face of the threat from China.

"We are ramping up the mass production of precision missiles and high-performance naval vessels. In addition, we are working to acquire various small highly mobile precision weapons that will help us develop comprehensive asymmetric warfare capabilities, ensuring that Taiwan is fully prepared to respond to external military threats," she said.

The President also linked the Taiwan situation to other areas of geopolitical tension, including the war in Ukraine.

"Russia continues its war against Ukraine, while China's military activity in the South China Sea, East China Sea and the Taiwan Strait undermines peace and stability in the Indo-Pacific region," she said.

"We absolutely cannot ignore the challenge that these military expansions pose to the free and democratic world order. These developments are inextricably connected with Taiwan."

The day after the speech, Taiwan welcomed a bipartisan political delegation from the United States, including Representative Brad Wenstrup, the ranking member of the House Intelligence Committee's subcommittee on Defense Intelligence and Warfighter Support, and Representatives Seth Moulton, Michael Waltz, and Kai Kahele, who serve on the House of Representatives Armed Services Committee. All four House members have been influential in supporting Taiwan.

From Washington's perspective, Congressional and other delegations are regular demonstrations of support for Taiwan, as distinct from support for Taiwan independence, according to Paule Haenie, from the Carnegie Endowment for International Peace in Washington.

Mr Haenie notes that when Nancy Pelosi visited the island in the summer, she met with both Taiwan's president and the leadership of the opposition Kuomintang party which has historically been friendlier toward Beijing.

This may have confirmed Beijing's perception that Taipei is growing more alienated from the mainland.

From Beijing's perspective, the visit constituted a "major political provocation" and sent the "wrong signal" to those in Taiwan in favor of independence.

But Mr Heanie notes that the US Members of Congress appear adamant to continue visiting Taiwan.

Weapons On the Way

Not long after Nancy Pelosi's visit to Taipei, the US State Department, headed by Antony Blinken, announced the sale of more than a billion dollars worth of military equipment to Taiwan, including advanced missiles.

Jacob Stokes, a fellow at the Indo-Pacific Security Program at the Center for a New American Security, another think tank in Washington, said that the bill sailed through Congress because politicians want to honor their obligations under the Taiwan Relations Act.

"The questions are really about the what and how the United States wants to incentivise Taiwan to increase its own military spending, given the severity of the threat from China and what is termed an asymmetric defense posture.

"The focus is on making a Chinese invasion very difficult, rather than to create a Taiwanse military which can match that of China in terms of size. It's similar to the response by the Ukrainian forces against the Russian forces in Ukraine."

But Mr Stokes also warns that the Chinese may take the view that Taiwan's lack of preparedness presents the People's Liberation Army with an opportunity to take advantage of its relative weakness.

"Can America produce weapons fast enough and get them to Taiwan in time so that Taiwan is able to deter aggression from China more effectively?" asks Mr Stokes.

President Tsai used the speech to stress that Beijing should not misjudge Taiwan's will to defend itself, or try to take advantage of the divisions that are part and parcel of a democratic system.