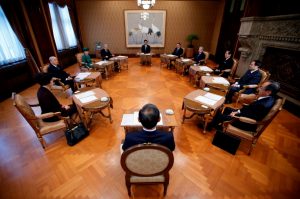 One stern-faced government official muttered, “The media must not report on such a sensitive issue prematurely as it involves potential conflict with the Constitution, and can cause misunderstandings and confusion.”

Under Article 4 of the Constitution, the Emperor “shall not have powers related to government.” The challenge was to accommodate the Emperor’s desire without overstepping the restriction set out by the Article. To overcome this complex issue, Prime Minister Shinzo Abe held highly confidential meetings with Chief Cabinet Secretary Yoshihide Suga, Deputy Chief Cabinet Secretary Kazuhiro Sugita, and Executive Secretary Takaya Imai.

The scoop reported by NHK in July last year caused a shock that rippled throughout the PMO. To add to the confusion, the Emperor published a video message on August 8, hinting at his intention to abdicate.

The issue of abdication is intertwined with the very roots of the imperial system. When the old Imperial Household Law was enacted, Emperor Meiji expressed his desire for abdication to be made possible, but this was rejected by the first Prime Minister of Japan, Ito Hirobumi, who feared that abdication would trigger a power struggle within the Imperial House.

The Emperor’s true desire struggled to penetrate through to the PMO, and was instead leaked gradually by the media. In order to strengthen its relationship with the Imperial Household Agency, the PMO designated Yasuhiko Nishimura to be the Imperial Household Agency's Vice Grand Steward. He used to be the Deputy Chief Cabinet Secretary for Crisis Management and also worked for the National Police Agency. However, the thick Chrysanthemum veil that stood between them could not be easily lifted.

In October 2016, while the Prime Minister inaugurated a panel of experts to debate the Emperor’s abdication, he also secretly ordered the legislative bureaucracy to amend the Imperial Household Law as little as possible, and to enact a special law that only allows abdication for the current generation.

Despite their efforts, the ruling and opposing political parties faced many obstacles in enacting this special law. The reason for this was that some opposition party members, who boasted of their relationship with the Imperial House, strongly pushed for a permanent abdication law, and even scrambled for the establishment of female Imperial family branches.

In order to avoid a political crisis over the Emperor’s abdication, the Prime Minister dispatched Masahiko Komura, the vice president of the Liberal Democratic Party, and Toshimitsu Motegi, the chairman of the Policy Research Council (and current Minister of Economic Revitalization), to participate in the parties’ debate. The Prime Minister finally brought things under control and the special abdication law was established.

That wasn’t the end of the story, though. A tug of war began between the Imperial Household Agency and the PMO to decide the abdication date.

The PMO had secretly decided to propose the abdication and the change of the era name to be on New Year’s Day of 2019. The motive was to minimize any disruptions to the citizens’ lives and to hold back the Imperial dating system from becoming obsolete in Japanese society.

However, the Imperial Household Agency argued that New Year’s Day would already be packed with other important affairs. The PMO compromised and proposed to change the era name on New Year’s Day and for the abdication to take place at the end of the year. The Imperial Household Agency was still not satisfied. Their reasoning was that the Emperor wished to officiate the 30th Imperial Memorial Ceremony for Emperor Showa, which would take place on January 7.

So the proposal to change the era name on New Year’s Day went out the window, but the Imperial Household Agency was toying with the idea of abdicating at the end of March 2019 and changing the era name on April 1. This time, the PMO was the one to express dissatisfaction, fearing the risk of political tumult during the nationwide local elections.

The next proposal to come to light was to abdicate on April 30 and change the era name on May 1. April 29 is Showa Day, a national holiday commemorating Emperor Showa’s birthday. Showa Day is followed by a long holiday, and the weather during this time is usually accommodating—the perfect opportunity to stir up a celebratory mood. It is said that the Prime Minister explained the proposal fervently during his private meeting with the Emperor on November 12. (Related Article: How Is Japan’s 2019 Looking? An Imperial Accession, 2 International Events, 2 Elections)

Although the abdication date has been decided, the details and dates of the Enthronement Ceremony and the Daijosai Festival have not been determined. The quiet battle between the Imperial Household Agency and the PMO is bound to continue. The abdication problem has left the government with a lot of unfinished homework, including questions on the future of the Imperial House.