The India-Japan 2 + 2 Talks: What Did They Achieve? 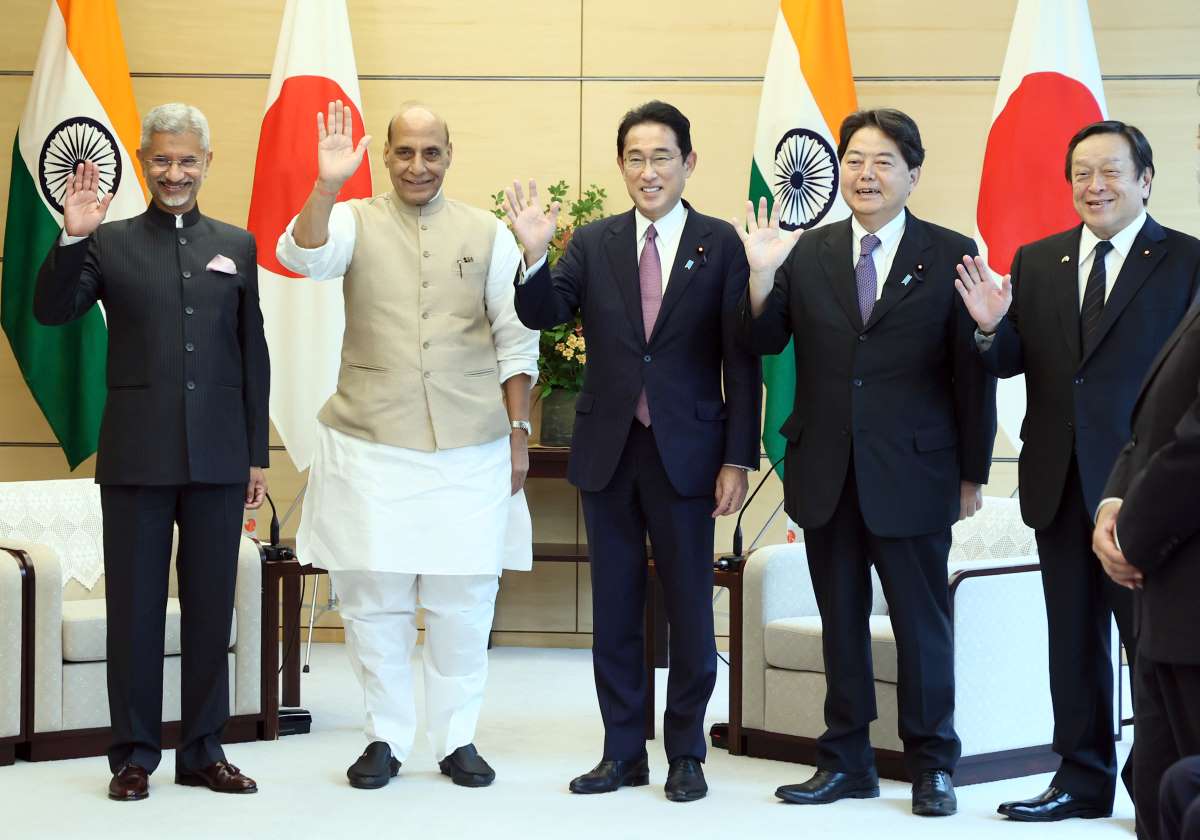 The 2+2 talks between the Foreign and the Defense Ministers of India and Japan on September 8 in Tokyo show the long path that India and Japan have traversed in recent times.

The two nations have been trying to strengthen their security ties since the signing of the 2008 Joint Declaration on Security Cooperation and the 2009 Action Plan to advance Security Cooperation. The first India-Japan 2+ 2 meeting was held in November 2019 in New Delhi. Then, too, India was represented by Singh and Dr Jaishankar, while Japan sent then- Foreign Minister Toshimitsu Motegi and Defense Minister Taro Kono.

New Delhi is a net security provider in the Indo-Pacific region and an important player for Japan’s Free and Open Indo-Pacific Vision.

Especially after the induction of its latest and first indigenously built aircraft carrier, the INS Vikrant, India is in a select league of nations capable of building its own aircraft carrier. Besides, India’s Andaman and Nicobar chain of islands lie astride key sea lanes of communication in the Indian Ocean region.

The Japan Maritime Self-Defense Force (JMSDF) maintains a base in Djibouti, and India’s location is critical for keeping Japan’s supply lines open in good times as well as bad. This will be a factor as Tokyo faces redrawing its security calculus in the light of the belligerent tone taken by China towards Taiwan, especially in the wake of the visit of the US House Speaker Nancy Pelosi.

For India too, Japan is a very important component of its “Act-East Policy,” which aims to reinvigorate its historical ties with the countries of Southeast Asia and East Asia.

Japan and India have been holding various joint exercises to strengthen cooperation, such as the bilateral Dharma Guardian and Japan-India Maritime Exercises (JIMEX), and the multilateral Malabar naval exercises. It is worth noting here that the first-ever bilateral maritime exercise between the two countries, JIMEX, was started only in 2012.

This time Japan also participated for the first time in the multilateral naval exercise in the Indian Ocean known as the MILAN exercises.

Nevertheless, quite a few challenges remain where Japan and India have differing visions.

First, of course, are the differences over the Russian invasion of Ukraine. While Japan has gone in for sanctions in sync with the United States and other Western countries, India’s position has been different. Notably, New Delhi still buys a huge amount of military hardware from Russia and has steadfastly avoided castigating Moscow in public.

Second, sales of military hardware from Japan to India haven’t worked out, although the two countries have carried out many joint exercises between the different wings of their armed forces. India was supposed to import Japan’s Shinmaywa US-2i maritime reconnaissance aircraft, but this has not happened so far.

Third, Japan’s post World War II constitution puts limitations on what kind of things its Self-Defense Forces are able to do. This hinders the kind of collaboration that Indian and Japanese forces can achieve in the years ahead.

Fourth, Japan and India have different kinds of relations with the United States. India is not an American ally, and only in recent years have Delhi and Washington come closer to each other. Meanwhile Japan has been a key ally of the US since the end of World War II.

On the other hand, India is a member of non-Western forums like the Brazil, Russia, India, China and South Africa Summit (BRICS) and the Shanghai Cooperation Organization (SCI). Then, there is the issue of interoperability, since India still uses a considerable amount of weapons of Russian-origin.

Fifth, Japan-India trade, which stood at $20.57 billion USD during FY 2021-22, pales in comparison with Japan-China trade ($372.1 billion USD in 2021).  Japan also needs China’s help when it comes to the North Korean equation, since Beijing is thought to have greater levers of influence over the Hermit Kingdom.

Takeaways from the 2 + 2 Meeting

One of the positive takeaways from the 2+2 meeting was the decision to conduct joint exercise between the air forces of the two countries. At the same time, the Indian Defense Minister invited Japanese defense industries to invest in the defense sector in India.

The Joint Statement issued after the 2+2 meeting notes that “the Ministers reaffirmed their commitment to a rules-based global order that respects sovereignty and territorial integrity of nations, and emphasized the need for all countries to seek peaceful resolution of disputes in accordance with international law”

So, while the 2+2 talks between the two sides were a success, there are still some areas where the two sides will have to agree to disagree. And therein lies the challenge.

The talks also demonstrate that momentum in the ties between India and Japan continues, even in the post-Abe era. That is something to celebrate in this year which marks the 70th anniversary of the establishment of diplomatic relations between the two countries.

Going forward, it is important for India and Japan to walk the talk when it comes to the defense and the foreign policy fields.  As they say, the proof of the pudding will be in the eating.

Dr Rupakjyoti Borah is a Senior Research Fellow with the Japan Forum for Strategic Studies. The views expressed here are personal.  His latest book is The Strategic Relations Between India, US and Japan: When Three is not a Crowd.