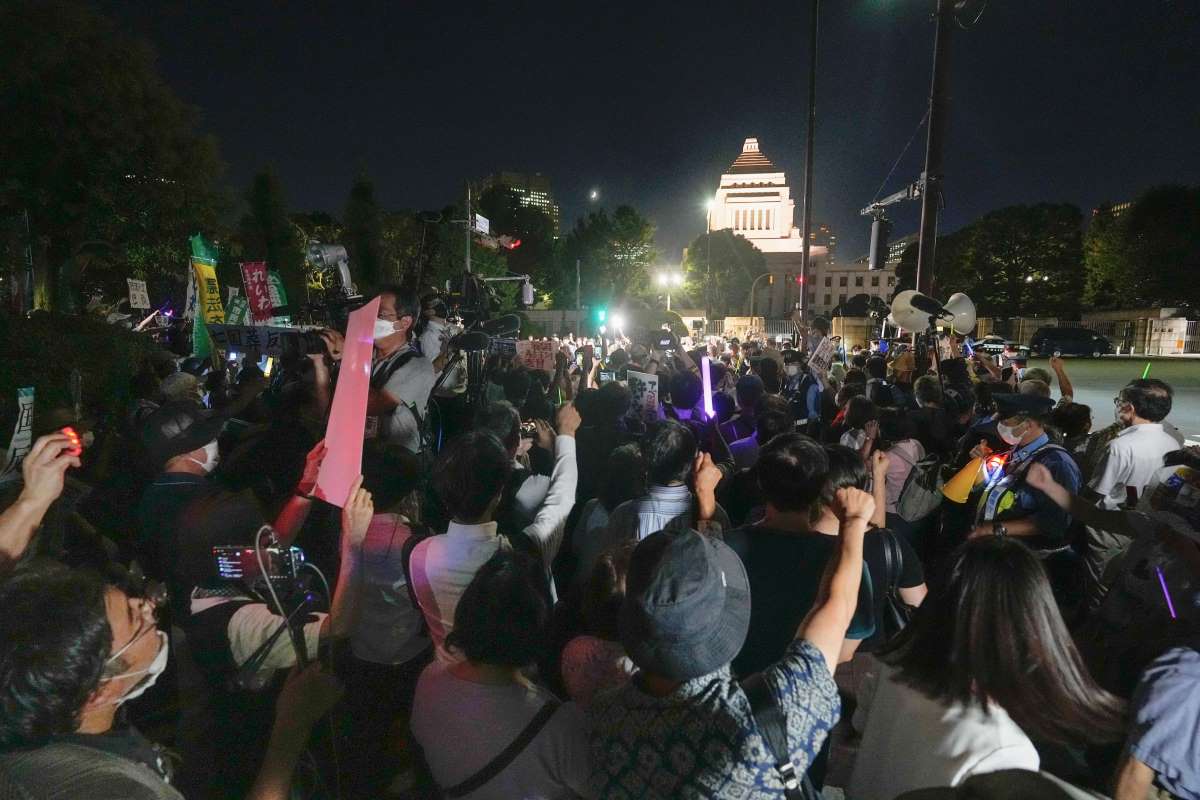 A protest rally held on August 31 in front of the main gate of the Diet to noisily oppose the state funeral of former Prime Minister Abe. (Kyodo)

The state funeral for Queen Elizabeth II was held today. The British monarch, who passed away at the age of 96, has been honored and remembered fondly as a friend of Japan.

After the end of World War II, when anti-Japanese sentiment was still strong, the Queen deepened her relationship with the Japanese imperial family, playing a leading role in reconciling her country with the former enemy nation.

The British Empire, once the ruler of the seven seas, collapsed after the two world wars, marking the end of colonialism.

The world had entered a new postwar era by the time Queen Elizabeth II acceded to the throne. Through 70 years of relentless effort and faithful service to her country, the Queen withstood various criticisms and strove to create a more open and accessible monarchy.

As freedom and democracy became the greatest virtues of the West, the Queen became a symbol of Commonwealth unity and the embodiment of the ideals of a constitutional monarchy in the modern world.

As the Queen rests in peace, JAPAN Forward would like to honor her achievements and wish success to her son, King Charles III, who was newly crowned at the age of 73.

A state funeral will also be held in Japan on September 27 for former Prime Minister Shinzo Abe, who was shot dead by an assassin. But the opposition party has turned his funeral into a political football, rallying its few supporters to stage noisy demonstrations in front of the prime minister’s official residence.

It is bewildering why some activists, politicians, and media outlets thought this was the best time to brandish anti-Abe slogans, as if inflicting anguish on the feelings of those who wanted to quietly mourn his passing was their claim to achievement.

JAPAN Forward has published numerous articles regarding Abe’s assassination. One of them is a column written by British analyst Peter Tasker, titled “The Abe Legacy: A Japan Empowered by Far-reaching Reforms,” published on September 10.

He touches on the relationship between Japanese politicians and the Unification Church, the religious group to which Abe’s assassin claims his own mother made a huge donation, causing his family to break down.

Notably, Sun Myung Moon, the founder of the Unification Church, renounced his anti-communism before he died in 2012, returned to North Korea, where he was born, setting up business there, and receiving a posthumous honor from Supreme Leader Kim Jong-Un. Tasker suggests that important Japanese politicians may have maintained relations with the Unification Church to have this “unofficial” direct channel to the Pyongyang regime.

Tasker concludes, “Japan’s journey to “normality” — which includes agency in foreign policy, pride in cultural heritage, and possession of similar intelligence resources to other large democracies — continues. Shinzo Abe was killed when he had so much more to contribute, but it is to be hoped that his legacy will be honored and extended.”

Nevertheless, the most-read JAPAN Forward article in the past two weeks was the article linked below, which reports on the Japanese government’s long-awaited decision to relax border control measures against the coronavirus. What readers abroad want to know most is when and how they can visit Japan.

Other articles that caught the readership’s attention are about Japan’s national interests, including one on the Japanese government’s rush to produce long-range missiles domestically, another debunking the misunderstandings about the treatment of POWs during World War II, and a third analyzing China’s perilous economic situation.

Since the end of the war, both the United Kingdom and Japan, by their respective methods, sought to be liberated from the curse of colonialism. The journey to becoming a normal country that upholds freedom and democracy continues, but the two countries have come a long way together.

JAPAN Forward will continue to support Japan on its journey to normalcy by honoring Abe’s legacy and delivering the true voice of Japan to the world.

Watch for the next issue on October 10.