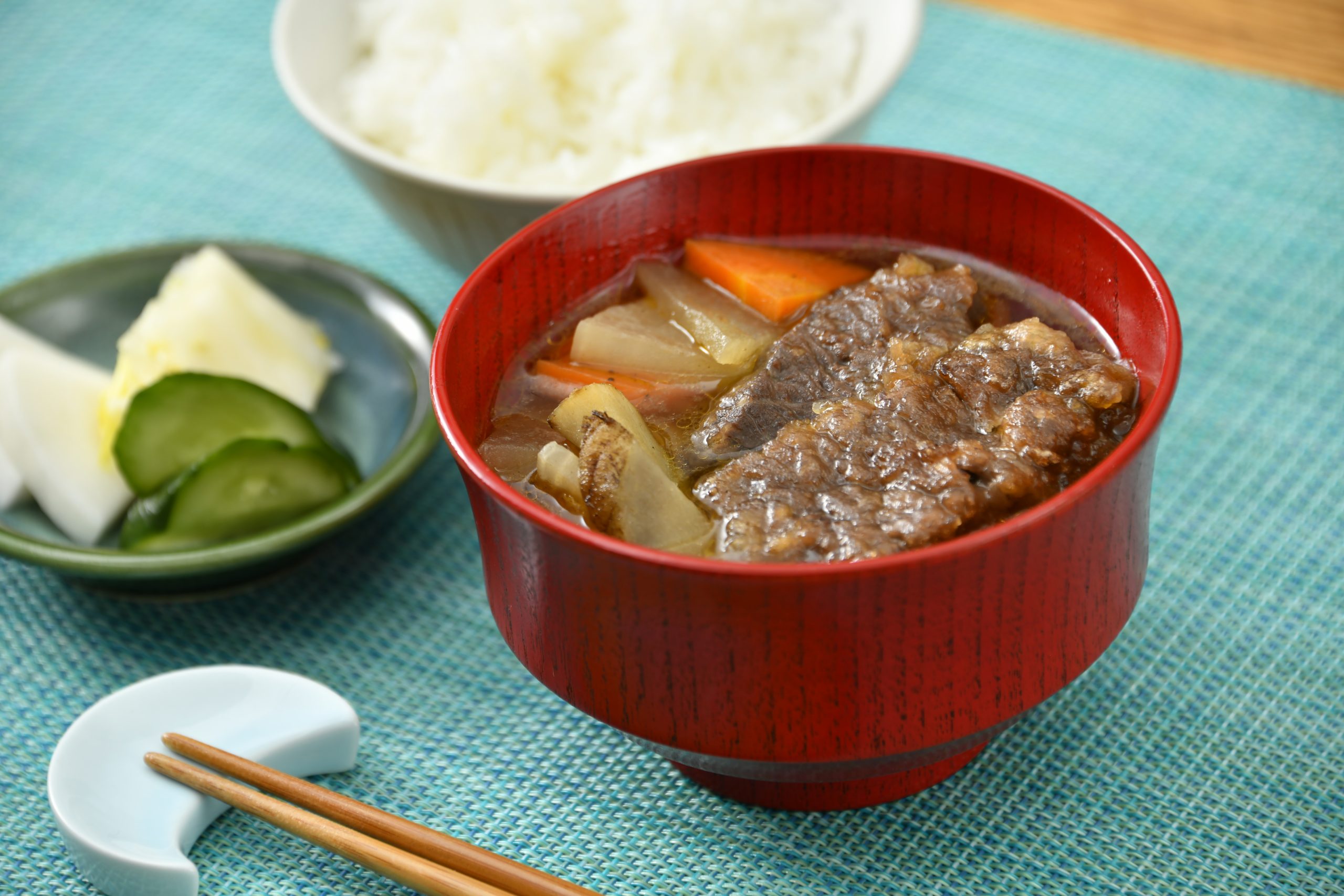 In the icy, silver world of the northern coast of Sakhalin Island, an Ainu girl called Asirpa sips a bowl of ohaw and whispers, “Hinna hinna.”

This scene is from the 17th volume of the popular manga series Golden Kamuy by Satoru Noda, published by Shueisha. The story takes place in the northern lands of Hokkaido and Sakhalin during the late Meiji era.

Ohaw means “warm soup” in the Ainu language, and hinna is an expression of gratitude for the food.

Asirpa and her group board a ship belonging to the indigenous Nivkh people of Sakhalin and succeed in hunting a beluga whale that lives in the Sea of ​​Okhotsk.

They collect driftwood for fire, and simmer the raw beluga whale meat in a large pot with other nutrient-rich ingredients, like potatoes, dried Siberian onion, and soft windflower.

The soup is flavored using the miso provided by Saichi Sugimoto, a hero of the Russo-Japanese War and fellow adventurer, which Asirpa carries around in a magewappa box.

The piping hot Japanese-style kujira-jiru (whale soup) invigorates and warms the body as the characters repeat “hinna hinna” to each other under the wintry sky.

Researching Ainu Culture for the Manga

Each frame of the manga is a product of scrupulous research by artist Satoru Noda. At the end of the comic book is a long bibliography of references about Ainu culture, just like in an academic paper.

When Noda’s manga received the 22nd Tezuka Osamu Cultural Prize Award in 2018, he described how he had a “humble attitude towards the Ainu culture, checking with experts as often as possible and refraining from assuming anything” in the creation of his work.

In Golden Kamuy, the character Asirpa is often seen making ohaw from whatever blessing nature provides, whether by collecting wild plants or hunting wild animals in Hokkaido. Whale soup is one of the many dishes of the Ainu. “Whale” is humpe in the Ainu language, and, like the Japanese, the Ainu have incorporated whales into their lives.

According to Yu Watanabe, a former curator of the Hokkaido Museum of Northern Peoples in Abashiri and an expert on the relationship between northern peoples and whaling, the Ainu people have traditionally used the meat and fat of beached whales as a source of nutrition.

Non-edible parts were used too, so nothing went to waste. The beard was useful as binding material for the itaomachip (Ainu sewn-plank boat), and the muscles and tendons near the spine were turned into thread, string, and bowstring.

Records of interviews by Russian researchers during the early 20th century show that the Nivkh people who lived on the coast of the Eurasian continent across the Sakhalin and the Strait of Tartary also preferred to eat the meat and fat of beluga whales that lived in parts of the Sea of ​​Okhotsk.

Hajime Ishikawa, a veterinarian who has researched whaling at the Institute of Cetacean Research for many years and an expert on whale ecology says: “Beluga whales are widely distributed, especially in the Arctic Circle. Hunting them is relatively easy and they constitute a large portion of the northern peoples’ food source even today. Beluga whales were likely prized at that time for their rich vitamin C content.”

Interviews with experts have verified the impressive historical record of the whale soup depicted in the manga, including Asirpa’s hunting and cooking methods. Throughout the history of the northern peoples, the majestic whales have been a source of the strength and stamina needed to brave through the harsh and unforgiving winters.

Manga artist Satoru Noda is from Kitahiroshima, Hokkaido. He started serializing Golden Kamuy in Weekly Young Jump magazine in 2014, and the story of treasure hunting in the northern lands became a hit.

As of January 2021, the 24-volume series has sold more than 15 million copies. Its animé adaptation has led to a rise in tourists visiting the locations in Hokkaido that feature in Golden Kamuy.

The series is also acclaimed for its many depictions of the staple foods of the Ainu, Nivkh, and Russians that pique the reader’s curiosity for a taste.

In July 2020, the National Ainu Museum opened in Shiraoi, Hokkaido, as a symbol of ethnic symbiosis and a facility to learn about Ainu history and culture.

RELATED: A Vanishing Culture: Japan’s Ainu People are Finally Getting a National Museum – But will Visitors Come?

In response to the growing interest in the Ainu lifestyle and cultural arts, Hokkaido Ajinomoto in Sapporo City, an Ajinomoto Group affiliate, developed ohaw recipes with a modern twist using Ajinomoto’s soup stock to promote Ainu culture through food. Now, Ainu dishes can be made easily at home.

One of Ajinomoto’s eight recipes is a whale ohaw inspired by the cooking methods of chicken tatsuta and kenchin-jiru, which are familiar dishes in Japanese households.

A registered dietitian of the company says that their hope is “to share simple recipes using whale meat for the younger generation,” especially because whale meat has become available again since commercial whaling resumed two years ago.

The JAPAN Forward crew took on the challenge. Thankfully, all ingredients are available at your regular supermarket.

First, cut the Bryde’s whale meat into thin slices and sprinkle them with cooking sake.

Soak the meat in soy sauce and ginger, then sprinkle with potato starch.

Slowly fry the meat until both sides are browned.

Next, quickly fry radishes, carrots, and burdock roots before simmering.

Flavor the soup with Ajinomoto soup stock. Finally, add the cooked whale meat to the soup and you have Easy Whale Meat Ohaw.

After a long and wintry day, the nutritious whale soup thaws away the cold from the body, drawing out a satisfied “hinna hinna” from the crew — it was all smiles around the table.

Even though the soup wasn’t an exact replication of their cooking methods, the Ainu and Nivkh people must have rejuvenated their strength in the same way during the harsh winters.

Baleen whales spend six months feeding, then raise their young in the next six months, during which they hardly feed. They can migrate thousands of kilometers continuously without sleep.

The secret of their strength lies in a component called “balenine,” which is abundant in the red meat from baleen whales. Recent studies have shown that balenine helps combat fatigue in humans.

The latest research reveals that balenine may also be effective in preventing dementia. The study was conducted by Professor Seiji Shioda of Global Research Center for Innovative Life Science, Peptide Drug Innovation, School of Pharmacy and Pharmaceutical Sciences, Hoshi University, and published in the summer of 2018. The findings indicate a high probability that the intake of whale meat extract containing balenine reduces stress, suppresses the progression of dementia, and improves its symptoms.

He intends to research the effect of balenine on the immune system in the future.

Psychological stress and physical fatigue have become commonplace afflictions for the modern-day man, so mental and physical health are crucial for a productive tomorrow.

January to March is Japan’s entrance examination period and will be especially stressful. Whale meat might just be the power food the students need to get through.

The adventures of Ainu girl Asirpa and Saichi Sugimoto continue in Golden Kamuy. What Ainu dish will make Asirpa say “hinna hinna” next? I admit, I look forward to the food as much as the story.