Drama in Alaska Starring the U.S. and China, but Japan’s Supporting Role was Central to the Story 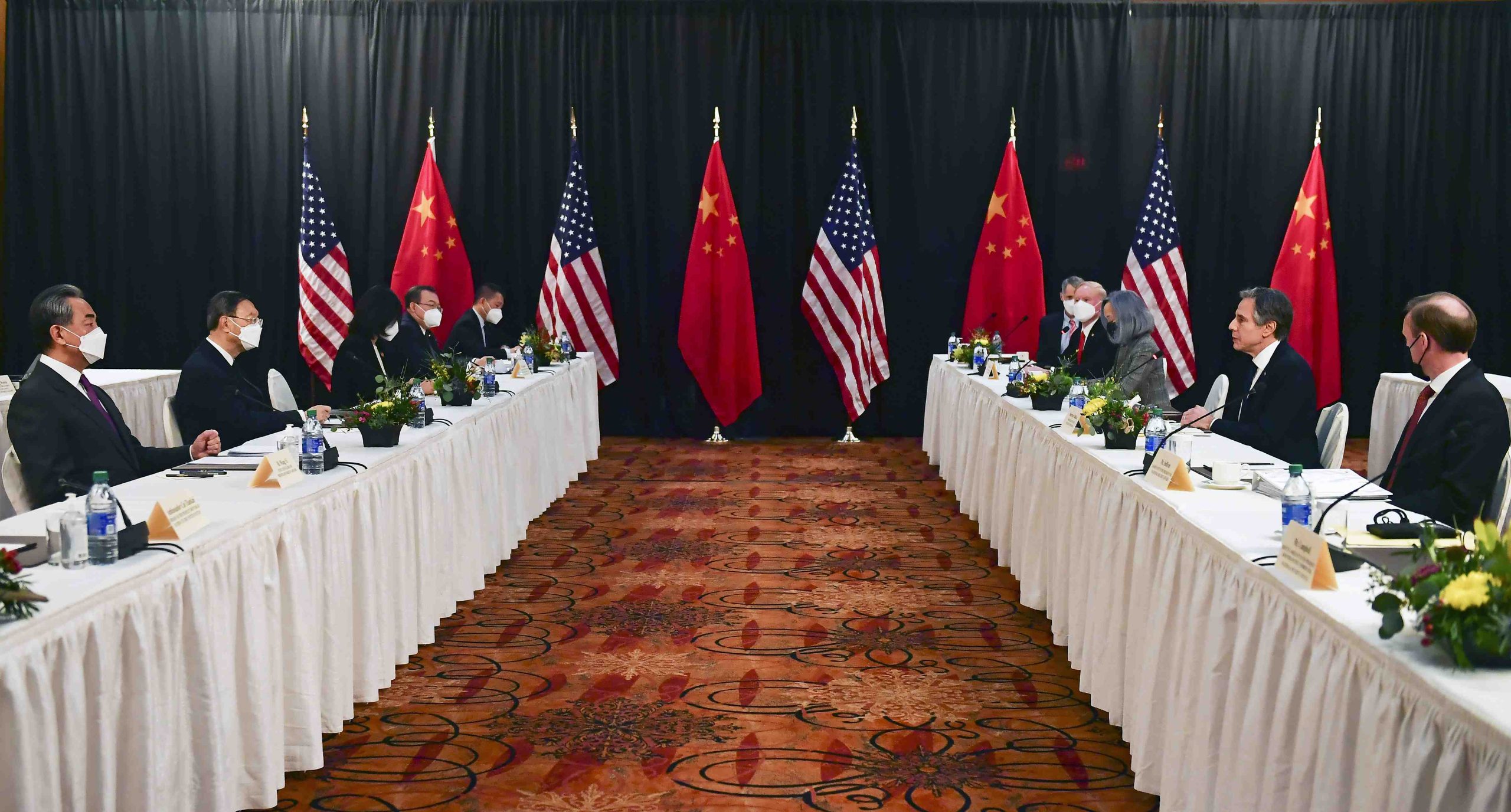 
March 21, 2021. The first face-to-face meeting between high level officials from the Biden administration and representatives from China did not go according to plan.

The summit quickly turned spiky, in full glare of the international media,

China’s top diplomat, Yang Jiechi, and Foreign Minister, Wang Yi, complained about the “tone” of the language being used by the U.S. Secretary of State, Antony Blinken and the U.S. National Security Advisor, Jake Sullivan.

Rather than backing down, the Americans responded with further allegations against China, accompanied by a robust defense of their own position.

This caused Yang Jiechi to snap. Instead of following his carefully prepared, scripted remarks, he launched instead into a fifteen minute lecture, listing China’s virtues and achievements and blasting America for its problems, including what he called systemic racism.

For the reporters who had gathered at the event in Anchorage, Alaska on March 18 and 19, this heated exchange turned a run-of-the mill press conference into a performance of high drama. They rushed to file the story.

Naturally, the Chinese media praised their delegation’s “wolf warrior diplomacy” and lauded Wang Yi and Yang Jiechi for not losing face in front of the Americans.

The Commnist Party newspaper Global Times said: “It tells Washington that the U.S. should stop pretending that they can point a finger at China. That era is over. The U.S. must deal with China in an equal and respectful way.”

The nationalist U.S. media rallied around Mr. Blinken and Mr. Sullivan and derided the Chinese for forgetting their diplomatic manners. “The Chinese government has utter contempt for the Biden administration, and doesn’t feel like hiding it anymore,” said Tucker Carlson on Fox News.

In order to understand why the Chinese side went off script and lashed out, it’s worth considering carefully the opening remarks delivered by Secretary of State Blinken.

He said that the goal of the meeting in Alaska was to inform the Chinese delegation of the Biden’s administration’s intentions, and “to raise concerns about actions by China, including Xinjiang, Hong Kong, Taiwan, cyber attacks on the United States and economic coercion of our allies.”

Mr. Blinken added that the relationship between the U.S. and China “would be competitive where it should be, collaborative where it can be, and adversarial where it must be.”

Such blunt talk annoyed the Chinese side, who felt it undermined the opportunity for dialogue. They told the U.S. representatives not to claim that the American version of democracy is superior to that of China.

Once the drama was over, tempers cooled and the two sides withdrew for private talks. The U.S. reported that the later discussions were “substantive and serious.”

The Chinese cannot have been surprised by their reception in Alaska. The Americans had warned them that meeting was going to be difficult.

In his visits to Tokyo and Seoul in the run-up to the Alaska event, Antony Blinken had railed against “objectionable Chinese behavior.”

In Alaska, Mr. Blinken said that there is “deep satisfaction from our allies and partners that the U.S. is back” and noted that other countries have expressed “deep concern about the actions of the Chinese government.”

This must surely have been a reference to a meeting between Mr. Blinken, Japan’s Foreign Minister Toshimitsu Motegi, and Defense Minister Nobuo Kishi, which took place on March 16 in Tokyo. The U.S. Defense Secretary, Llloyd Austin, also attended that session, known as a “Two Plus Two” ministerial summit.

During the press conference in Tokyo which followed, Mr. Kishi said the U.S. and Japan should engage in “more sophisticated bilateral and multilateral military exercises… from the perspective of deterrence and response capability.”

Mr. Motegi reconfirmed the Japanese government’s strong commitment to the defense of Japan by the United States, using all types of force, including nuclear.

He added: “China’s behavior, where it is inconsistent with the existing international order, presents challenges to the alliance and the international community. We remain opposed to any unilateral action that seeks to change the status quo, including in the East and South China Seas. We share serious concerns over the China coast guard law.”

China’s coast guard is authorised to fire weapons on vessels it believes have entered Chinese territorial waters. According to the Japanese government, there are around 130 Chinese coast guard boats near Japan’s Senkaku islands.

Where Does South Korea Stand?

One issue which remains somewhat ambiguous is where South Korea currently stands in terms of its relationships with the United States and Japan.

The South Koreans gave the Americans a warm welcome in Seoul. Under Mr. Biden, they have reached agreement on the cost of their defense alliance, an issue which had been a major bone of contention when Donald Trump was president.

Joe Biden has also authorized the continuation of joint military exercises between the U.S. and South Korea, although Mr. Trump had threatened to stop the “war games” – saying they were too expensive. However, this year the exercises are a virtual event, involving computerized simulations, rather than missiles, tanks and aircraft.

In Tokyo, Mr. Blinken said there was “no greater strategic advantage when it comes to North Korea” than the trilateral alliance between the U.S., South Korea and America.

Yet behind the scenes, the Japanese government voiced its frustration at South Korea’s attitude towards the alliance. Historical disputes, which should have been settled decades ago, have been revived by South Korea’s courts. And Japan and South Korea are involved in a trade dispute, which is under review by the World Trade Organization.

When they were in Tokyo, Mr. Blinken and Mr. Austin sported blue pins on the lapels of their jackets as a show of solidarity with Japanese people who have been abducted by North Korea.

The detainment of those captives remains an emotive issue, which the Japanese government wants the Americans to help resolve.

Japan wants maximum pressure to continue to be applied on North Korea through sanctions, believing this is the best way to prevent its enemy from pursuing its nuclear and long-range weapons program.

However, the South Koreans, under President Moon Jae-in, still hold out a somewhat forlorn-looking hope of engagement with Kim Jong Un’s regime in the North.

The North Koreans have destroyed the liaison center where talks with the South were once held and they maintain that negotiations with either the South or the U.S. are a waste of time.

Mr. Blinken has urged China to use its “tremendous influence” to convince North Korea to give up its nuclear weapons. Yet it is doubtful that the Chinese side will offer the U.S. any help in this regard, following the confrontation between the diplomats in Alaska.

The Biden administration will soon complete its review of North Korea policy, in consultation with South Korea, Japan and other allies.

It will be discussed when the Japanese Prime Minister, Yoshihide Suga, goes to the White House in April, becoming the first world leader to hold face-to-face talks with President Biden in Washington.

South Korea’s President Moon is also expecting an invitation to Washington before he leaves office next year.

The Biden administration is trying to write the scripts for East Asia and persuade its allies to play their parts.

Japan seems happy to follow America’s direction. South Korea is less happy with its role, and China is furious to have been cast as the villain.

It all sets the stage for an exciting next stage in the drama.

Mr. Biden Take Note: Conciliation with China has a History of Failure

Duncan Bartlett is a regular contributor to Japan Forward and runs the news portal Japan Story. He is a Research Associate at the SOAS China Institute, University of London and presents the weekly podcast, China In Context.