To Keep China at Bay, Int’l Community Must Shore Up Taiwan’s Democracy and Economy 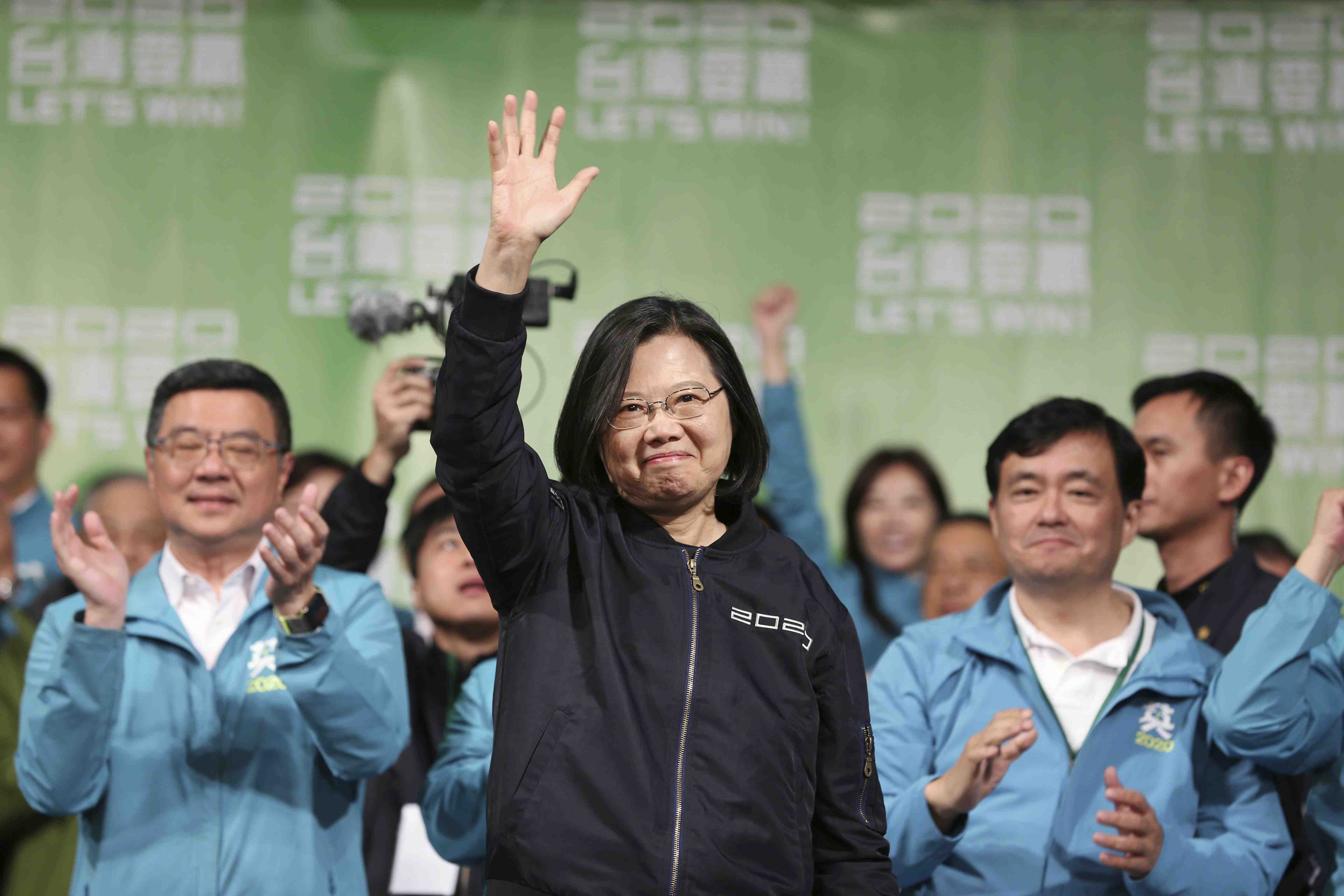 Now that President Tsai Ing-wen was safely re-elected for a second term, a new battle has begun. Unlike the domestic one during the presidential, vice presidential, and Legislative Yuan elections, this one will be international in nature and will necessitate friendly countries joining.

Namely, President Tsai’s Taiwan will face increasing pressure from a sulking and desperate People’s Republic of China (PRC), whose candidate promoting closer ties with the mainland was roundly rejected and whose widely reported efforts to influence the election came to naught and actually backfired.

The pressure will not only be political, diplomatic, and military in nature, but also immediately, and most effectively, economic. What the PRC actually does and how its leader decides to go about it remains to be seen, but readers should know that it is coming.

The people of Taiwan have done what they needed to do. They and their democratic institutions stood up to the information warfare, political and military bullying of the PRC, and elected an incumbent candidate, who overcame constant pressure from outside and within, to serve them for another four years.

As readers know, an overwhelming majority of the public recognize themselves as Taiwanese, and not part of mainland China. They also are keenly aware of the fate that awaits them were they to choose the path of allegiance to the PRC through the failed “one country, two systems” approach — that which has so sadly befallen Hong Kong. Hence, the motto, “Today’s Hong Kong, tomorrow’s Taiwan.”

It is now time for the international community — which collectively breathed a sigh of relief upon hearing the election results and whose norms Taiwan deeply and widely shares — to step up and help that country.

Time for Democracies Around the World to Step Up

How can we around the world help? Obviously, the fastest route is to bestow diplomatic recognition to what, objectively speaking, is an already sovereign, democratic, and prosperous nation full of youthful vitality and hope — and a country that shares the norms of respect for human rights, the rule of law, free speech and assembly, and a free market.

This recognition should begin with the United States, also facing presidential elections this year. As someone who has lived fulltime in East Asia for almost 30 years now, I highly encourage the Donald J. Trump administration to reverse our country’s mistaken policy of the past 41 years of non-formal recognition of Taiwan. Many countries will follow our lead. And this time, fortunately, it will be in the right direction.

For decades, the PRC has waged an intense effort to deny Taiwan representation in international organizations, multilateral military exercises, and diplomatic relations with individual countries, much like a bully in a schoolyard tries to isolate his or her intended victim. For those nations, especially democratic ones without strong connections — economic, cultural, political, military, diplomatic, etc. — to Taiwan, either historically or due to the PRC’s economic and political pressures, diplomatic recognition of Taiwan should be immediately, actively, and deeply promoted. There may be no better time to reverse course.

While I will continue to argue for recognition, the easiest and most important way to support this small island nation of just under 24 million right now, however, is probably economic. In order to punish Taiwan and weaken President Tsai’s administration, the PRC will exert full and maximum pressure on Taiwan’s economy in the hopes that, in future elections, candidates urging the repair of relations with the mainland and greater market access, etc., will win in landslides.

Again, here, I call on the United States, as well as Japan, where I reside, to pursue Free Trade Agreements with Taiwan bilaterally, and perhaps trilaterally as well. But time is of the essence. The longer we wait, not only the quicker the damage to the economy, but also the quicker the effect the PRC’s punishment policy. We have seen this used in other situations against other countries, including Taiwan in the past, and thus know it is coming and that it can be mitigated.

Triangle of Cooperation to Support Taiwan

Indeed, I hope each country already has a draft FTA prepared, ready for signing. If not, there are multiple formats to choose from.

Currently, Taiwan has FTAs or ECA (Economic Cooperation Agreements) with approximately 10 countries and areas, including the Cross-Straits Economic Cooperation Framework Agreement with the Mainland itself. These include FTAs with Panama (2004), Guatemala (2006), Nicaragua (2008), El Salvador and Honduras (2008), New Zealand (2013), and Singapore (2013), and ECAs with Paraguay (2018), the Kingdom of Eswatini, formerly known as Swaziland (2018), and the Marshall Islands. (The last one was signed in November 2019. Other dates in parentheses are when the respective agreements went into effect.)

Without belaboring the point too long, diplomatic relations would of course be very helpful, and along with economic and defense relations, form what I call the triangle of cooperation that most strong, allied relationships are built on. Shared values — freedom, free trade, and security — are the glue that forge these relations, and trust (personal, institutional, and national) are what keeps them all going.

An FTA, ECA, or other formal economic arrangement would demonstrate solidarity with Taiwan. But even if the PRC does not retaliate economically against Taiwan — which is difficult to imagine as its actions until now are consistently transparent and predictable — an FTA or, in the case of the United States and Taiwan, a Trade and Investment Framework Agreement, is worthwhile in and of itself to promote economic growth and security (i.e., reducing American dependence on the Chinese economy).

Taiwan’s Real Security is in Its Business Sector

The U.S.-China Trade War is, interestingly, serving Taiwan’s future economic potential nicely with a windfall of $4.2 billion — higher than any other market. This new business comes not only from Taiwanese firms pulling out of the Mainland, but also new foreign firms replacing supply chain components previously manufactured in China.

The trade war has also served to educate business executives and government policy makers in the United States and elsewhere as to the challenges and downside of doing business with the PRC. In the United States, this is now evident in the dramatic shift in support for Taiwan, including the Taiwan Travel Act (March 2018), which now permits U.S. officials to travel to Taiwan; the $2.2 billion USD sale of military equipment announced last summer along with another $8 billion USD in 66 F-16 fighters; and an increased attention to belated port visits by military vessels.

Most significantly, the U.S. Congress is presently considering a major shift in U.S.-Taiwan relations with legislation (already passed unanimously out of the Senate) that encourages the United States to engage in FTA negotiations with Taiwan and sets up sanctions for nations acting to undermine Taiwan.

While Beijing continues to squeeze Taiwan’s diplomatic space, it is the island’s business sector that is its real security as new ties and trading arrangements are forged. Those ties are strengthened immeasurably with the institution of FTAs and other trade pacts. There is clear, and hopefully unchanging, evidence that the United States is starting to lean in Taipei’s direction. This development needs to be encouraged along with other allies and countries not only in the Indo-Pacific region, but globally.

Japan Should Pave the Way with Economic Agreements

The goal for both Taiwan and its friends and allies should be to embed the island’s business sectors into a series of global trade agreements to enhance the mutual prosperity of trading partners and, in turn, economic insulation from Beijing’s squeeze.

In fact, Taiwan, already a member of the Organization for Economic Cooperation and Development, Asia-Pacific Economic Cooperation, and the World Trade Organization (all as Chinese Taipei), should also be openly invited to join the Comprehensive and Progressive Agreement for Trans-Pacific Partnership (CPTPP, also known as TPP11) as soon as possible.

It clearly wanted to join the original TPP framework, and its participation would have helped fill the void — not entirely, obviously — created by the U.S.’ decision to pull out of the agreement. Japan, which is not only geographical neighbors but also has close historical ties, could and should help pave the way, since it led the efforts to save the TPP in 2017 and 2018, and has important economic and security interests in a prosperous and safe Taiwan.

Japan is Taiwan’s third largest trading partner, and Taiwan is always high on the list for Japan as well. Both countries remain the most traveled to destinations for one another, and there are already a number of bilateral arrangements, including a taxation treaty. As such, there have been calls for a bilateral Economic Partnership Agreement (EPA) or a full-blown FTA between them. But there is no concrete movement on it, unfortunately, in part (but not exclusively) because Taiwan continues to ban agricultural products from the Tohoku area after the March 11 disaster and nuclear accident.

Japan already has 18 FTAs worldwide, including 13 in the Indo-Pacific region. Four more are under negotiation. In light of the importance of Taiwan’s markets and the quality of its goods and services, as well as the real concerns about the PRC’s supply chains and fair-trade practices, Japan would do well to seek an agreement with Taiwan.

The United States in the meantime has a handful of bilateral economic agreements in the region. In addition to the FTA with South Korea revised in September 2018, and earlier ones with Singapore (2000) and Australia (2005), the United States and Japan recently signed a U.S.-Japan trade agreement which entered into force this year on January 1. Discussions are also underway for a U.S.-Philippines FTA and one with New Zealand.

Basically, when it comes to FTAs, the main hole in the first island chain is that with Taiwan. The United States and Japan, allies themselves, and both major trading partners with each other and with Taiwan, need to fill that hole and to do so very quickly, thus shoring up democracy in Taiwan and expanding peace and prosperity in the Indo-Pacific region for generations to come.

Robert Eldridge is the Japan-based North Asia director for the Global Risk Mitigation Foundation and a frequent visitor to Taiwan.